A Daylong Visit to the George Dickel Distillery

I first visited the Cascade Hollow Distillery aka George Dickel in 2012, and rereading my previous post it seems a lot has changed since then!

This May (2019) I had the opportunity to revisit the distillery in advance of their release of the new Dickel Bottled in Bond Tennessee Whiskey. For the trip they had us "intern" with various members of the production staff. We didn't really have to do anything (so don't worry I didn't screw up the whiskey); we just got to spend time with team members and were able to ask lots of questions.

At Dickel they distill 6 days per week, on two shifts per day. They shut down distillation every night, unlike larger distilleries that run 24/7. Dickel is expanding but it will take a lot of work to expand to 24/7 production; it didn't sound like that was going to happen in the next couple of years anyway. 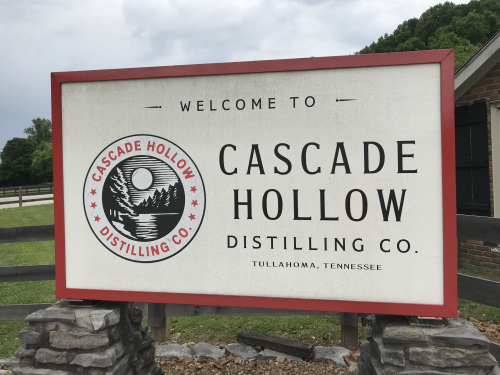 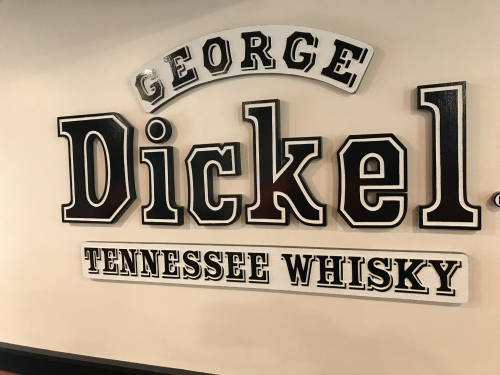 The Dickel Tennessee whiskey mashbill is 84% corn and 8% each rye and malted barley. Their rye is made at MGP so for the most part they're just making the same thing every day. Distiller Nicole Austin said that though you'd think she'd be in the distillery actively tasting and blending and such, all the work you'd assume she does daily only takes a few weeks per year. The rest of the time seems to be administration, marketing, research and other tasks related to running the brand.

They receive two truckloads of grain per day. The grains are measured for moisture content to ensure it's less than 15%. They said they've only had one bad load of grains in 15 years, and that was due to someone at the grain producer accidentally mixing in wheat.

The corn they mill (grind up) in advance of using. The corn, malt, and rye are each milled separately then combined by weight into the cooker at different times. The guy in charge of this "drops" grains into the cookers located on the floor below.

They go in order : pre-malt, corn, then rye then the rest of the malt. I missed what the pre-malt is for. But the order is because the corn needs a hard boil to cook it properly. After cooking, the liquid cools a bit before rye is added ("We don't want to cook the crap out of it" because it's there for flavor, says Austin.). Then most of the malted barley is added- they don't want it too hot because that would kill the enzymes in the malt. Each of these stages begins or ends when the mash reaches certain temperatures.

They also add liquid enzymes to the mash - it looked to be about 4 cups worth of liquid to each cooker.

Some of the sour mash, the yeasty water from the previous distillation, goes into the cookers along with fresh water, and some goes into the fermenters directly. They say splitting it in these two stages is just because of volume, not for any flavor reason. I have another post just about the sour mash process going up later this week. 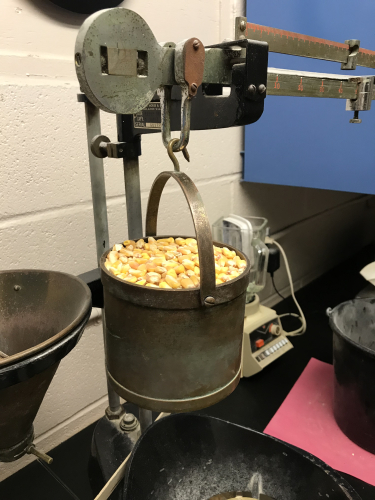 Grains and water come out of the cooker at 150 (Fahrenheit, I think) and are cooled to 72 as they go into the fermenter so that the hot water doesn't kill the yeast. They use a custom made dry yeast that's propagated elsewhere.

The fermentation expert also takes samples of the uncooked, cooked mash and the backset (sour mash) and measures/makes notes of their pH, total acid, and brix. After fermentation the beer is 10% ABV. 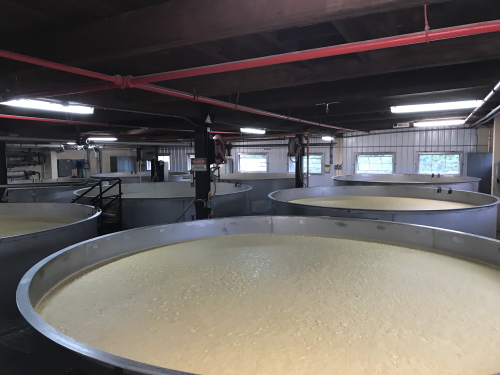 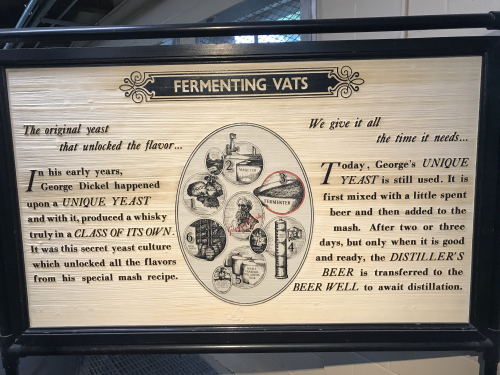 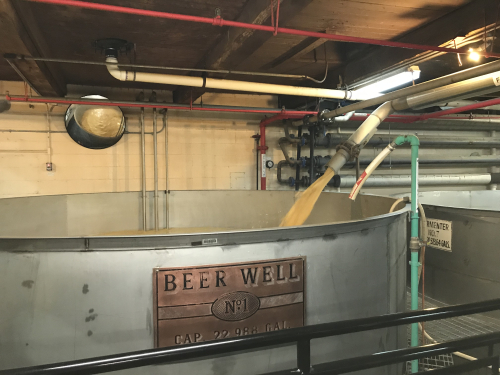 It takes 4.5 hours to distill 1 fermenter.

The distillation column has 19 plates. The mash goes in at the 17th plate near the top and drips down the column as it removes alcohol from the mixture. The alcohol passes up through the column and comes off the top above the 19th plate.

The alcohol comes off the still at 135 proof, then it is redistilled in the double up to 150 proof.

After the spirit comes off the still, it is run through a copper reactor filled with copper "Raschig rings" before it goes into the doubler. Though I'm not positive, I think in other distilleries the top of the still above where solids enter is filled with these copper rings, rather than being in a separate container as at Dickel.

Because they shut down the plant each night, the heads and tails at the beginning and end of each day are simply redistilled in the next run.

The byproducts of distillation are the wet grains and the yeasty liquids. Some of the liquids go into the sour mash. The wet grains are sold as animal feed. (At some distilleries like MGP the drains are dried first. Here they are not.) 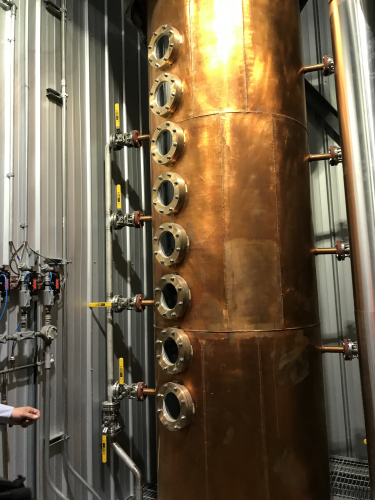 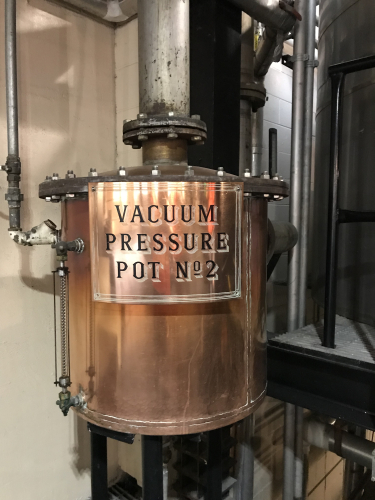 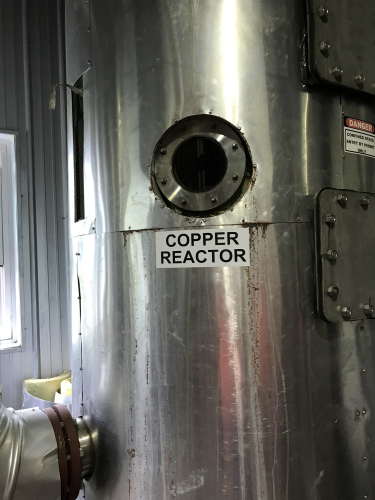 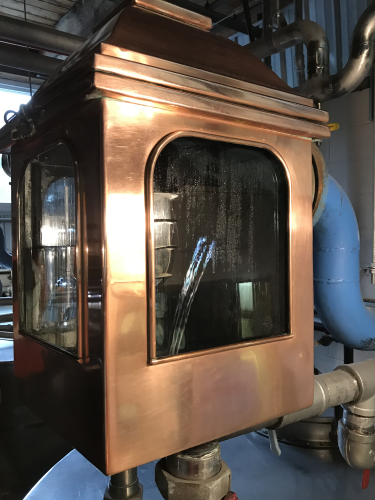 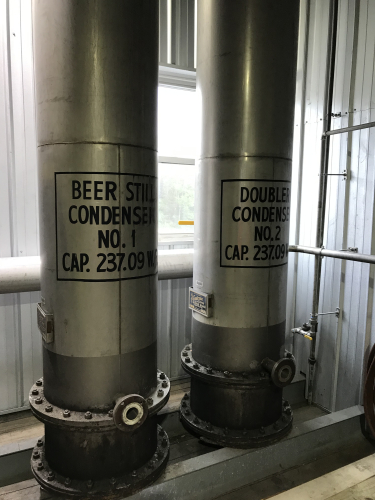 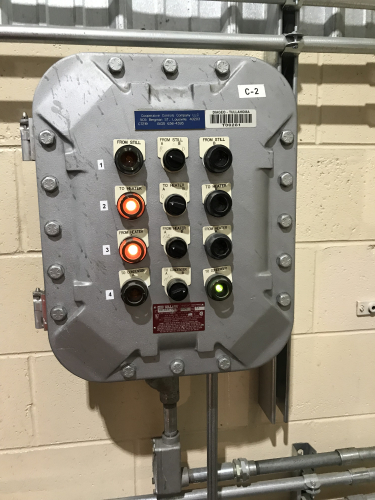 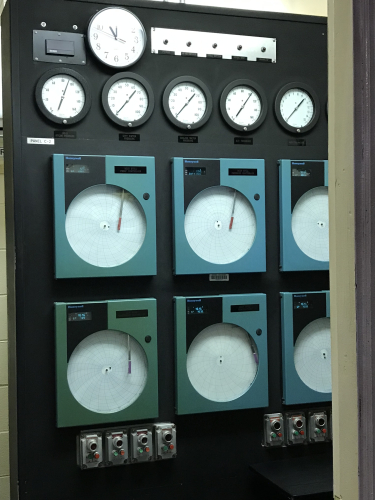 Because this is Tennessee Whiskey, it is filtered through charcoal before aging, like at Jack Daniel's. But unlike at JD, they chill the whiskey to 42 (Fahrenheit, I think) before running it through the charcoal. The chilling increases flocculation.

The sugar maple charcoal is prepared on site - burned and then extinguished at a certain point.

It takes about 24 hours to filter one day's worth of distillate. The distillate comes off the still at 150 proof, is reduced to 126.5 before charcoal filtration, and comes out at 125 proof.

Virgin wool blankets line the bottom of the filtration tubs to collect the charcoal dust. In my last visit to Dickel, I noted that they fill the charcoal vats up with liquid then let it drip out rather than having it drip into and out of the vats continually. I'm not sure that's the case anymore, though I could be mistaken.

Austin gave more detail on the charcoal filtration process. She said that the liquid comes off the still very oily, buttery, and fruity smelling with popcorn notes due to their distilling with low reflux. Filtration through charcoal is a selective filtration that takes out the heavy oily notes while leaving the fruity ones in the spirit. So according to Austin they can distill in a way that builds lots of character because the charcoal filtration takes out notes that they don't want in the final spirit. 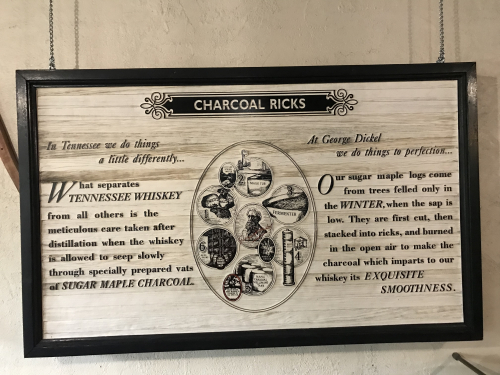 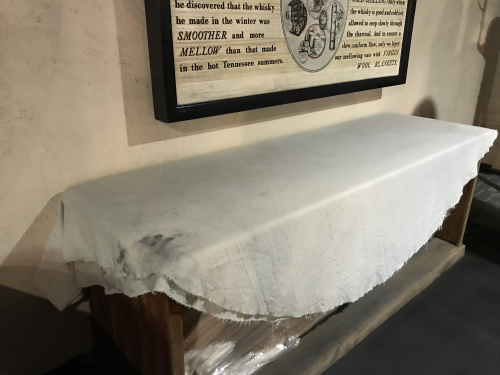 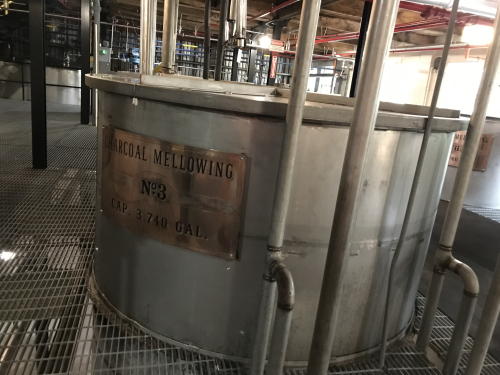 Barrels are filled at the distillery and then are delivered to the warehouses. We took a hay ride up the road behind the distillery to where several warehouses are located - and where many more are being built.

Most of the time this distillery produces their Tennessee whiskey, just making the same mashbill daily. But distiller Austin has been doing some experiments. She said they're "exploring" making their own rye "to see if there is a reason to do it" themselves, rather than continuing to use MGP's rye in their bottling. They've also tried some other mashbills recently, but I don't know if any new products are in the pipeline.

The angel's share takes about 50% of the liquid in each barrel after 7 years. And because they don't combine and refill barrels, the angel's share is even more as the barrels get emptier. They told me that each 9 year old barrel makes between 10 and 16 12-packs of whiskey. Not a lot! 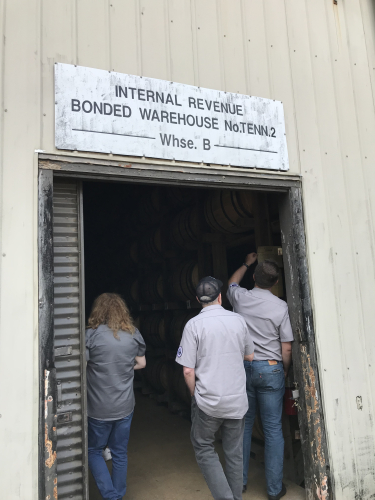 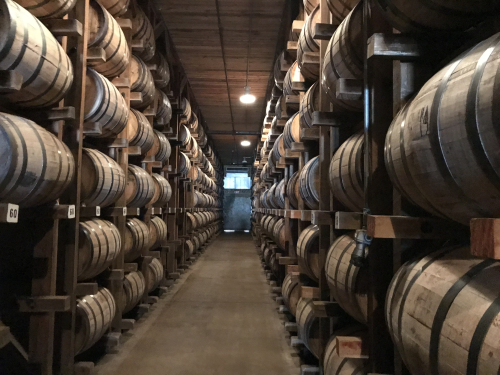 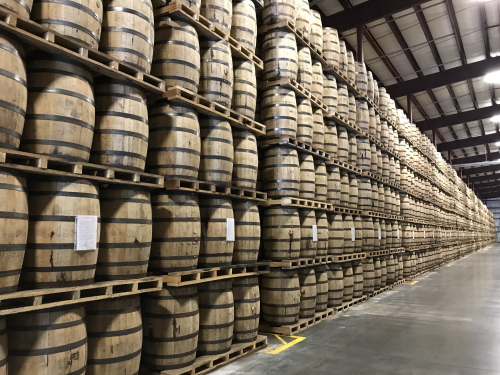 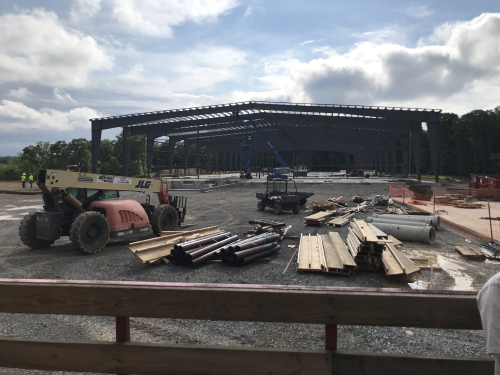 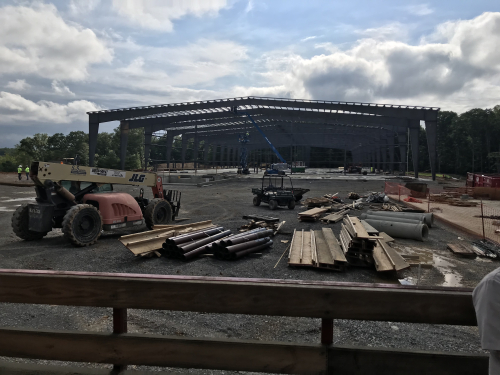 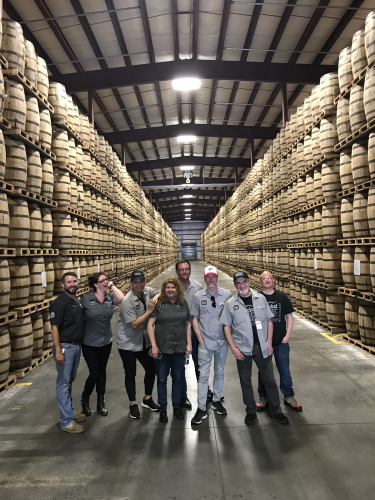 Thanks to George Dickel for a great visit!

Stay tuned for a couple more posts related to my visit.

Premalt is added usually at the dough-in stage or slightly after (when the fround corn is mixed with water). The enzymes from this help thin out the mash and reduce the viscosity. The enzymes get denatured as the mash greats brought up to the cook temp, which is why more is added again later. Corn mash and rye mash both get very thick and gummy as starch hydration and gelatinization occur which can make processing challenging, so the pre malt helps with being able to mix and cook it.

Thank you for the explanation!

Do you know if Dickel is the source of the Tennessee bourbon with 70% corn in it's mashbill that is sold by several NDPs? Heaven's Door and Bib & Tucker are the two biggest names that come to mind. They certainly don't taste like Dickel, but I don't know who else would have so many well-aged barrels available and would be willing to sell them.

I do not know; they didn't mention producing product for other brands but I didn't ask specifically and it wasn't the focus of the visit.

I also peeped at MGP's product list to see if there were any 70% corn listed but didn't see any.
https://www.mgpingredients.com/distilled-spirits/beverage/product