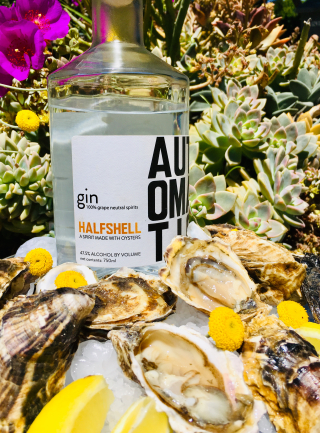 Hog Island provided the distillery with 200 live Sweetwater oysters from Tomales Bay, which the distillers put into bags, covered with a plate, and ran over with a forklift to crush them before throwing them into the still - shells, meat, 'liquor' and all.

Like the other gins made at OsCo, a grape spirit base is redistilled with botanicals; some in the pot with the alcohol and more delicate flavors in the basket in the steam vapor.

To round out Halfshell gin, they added the foraged nori again, and also foraged kombu from the same provider Sully Farms. Non-ocean botanicals included fresh celery root, tarragon, fresh and dried lemon peel, and chicory. They also used a lot of juniper as would be typical of a London dry style gin, said  Head of Sales Michael Pierce, so that it could be the most versatile gin for Hog Island, used in the well.

The idea came together from some conversations between the distillery (already known for their willingness to collaborate as they did with their Trade Winds flavored brandy with East Bay Spice Company) and Hog Island Bar Manager Saul Ranella.

While the gin was made for Hog Island, it's not exclusive to the bar. Each batch of OsCo's gins are about 384 liters, and Hog Island bought half in advance, about 15 12-liter cases. Hog Island has taken their delivery so you can find it in the Ferry Building, and Pierce has begun selling the gin to bars and liquor stores this week. 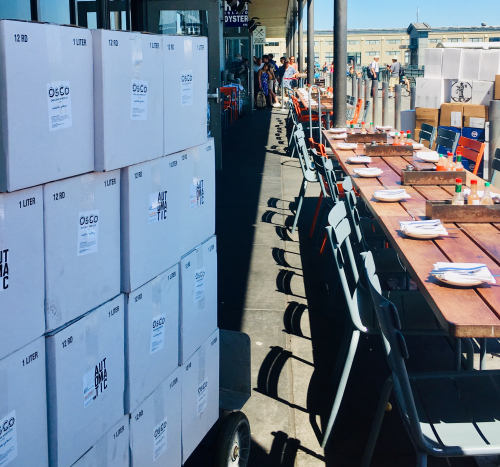 As for the taste of the gin, Pierce says that it presents as gin with a "Coastal funk" on the nose from the nori and kombu, while the oyster qualities including shell minerality and unctuous/creamy texture come in on the palate. The finish brings the juniper, tarragon, and lemon.

Founder Adam Nelson did eight test batches on their small still to get the flavor combination right. Those oysters were cracked open with a hammer, which is what they were trying to replicate with the forklift in the big batch.

When going from the small glass stills to the larger copper one, Pierce says that some of the fresh oyster quality was reduced in the bottled product, but when mixed with typical gin mixers (tonic, vermouth, Chartreuse, Luxardo) then the oyster note pops - perhaps because of the sugar in those drinks. 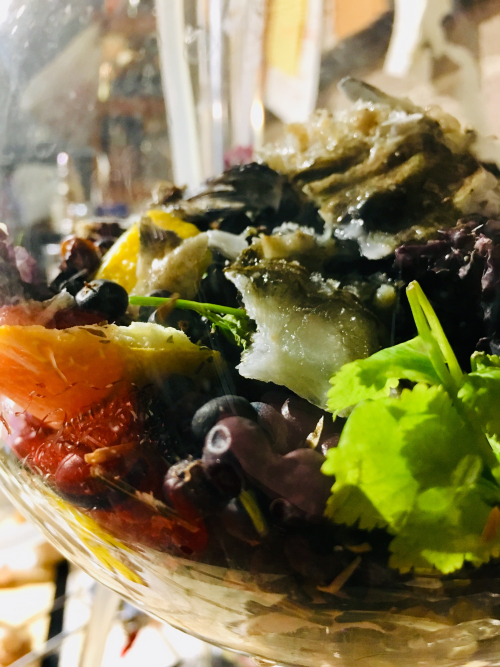 Botanicals and Oysters in the Test Still

There has been a big trend in both gin and Islay whiskies of pairing spirits and cocktails with oysters, usually just in tastings, but in a few cases right in the bottle. Japanese brand Sakurao Gin is distilled through oyster shells. Scottish brand Isle of Bute Oyster Gin appears to also be distilled through whole oysters, like OsCo's.

Closer to home, a few years back Morgan Schick of the Bon Vivants created the drink menu for Cafe Du Nord and included the Martini Du Nord which was made with oyster shell-infused Noilly Prat vermouth and Ford's Gin. And of course there are oyster stout beers to be found, some brewed with oyster shells and others with the meat as well.

Seafood fans can try or buy the Halfshell Gin locally, and globetrotting cocktailians should probably keep this one in mind for gifting a boozy taste of the Bay. 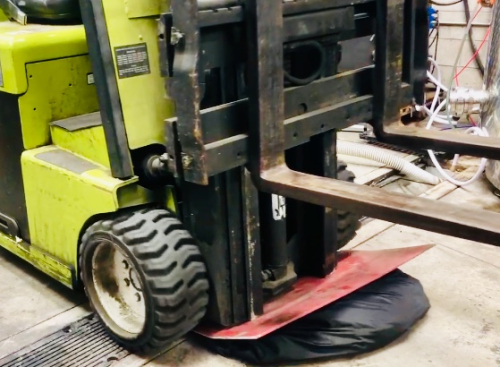 Is there any chance that you might sell your Halfshell Gin at Nugget Markets some day?