Thinking Thoughts About Bottled in Bond 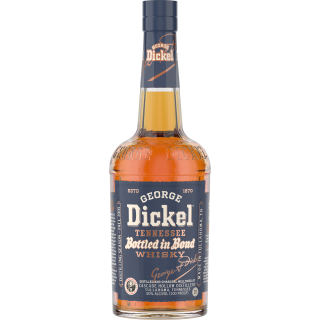 Though I know the rules for bottled in bond whiskey and other spirits, in my head the whole thing operated differently than it does in reality. This came to light for me on a visit to the Cascade Hollow Distilling Co., home of George Dickel. The trip I took was to celebrate their bottled in bond (BIB) release.

I knew that BIB is a guarantee of certain standards - the spirit must be distilled in one season by one distiller at one distillery, be a minimum of 4 years old and bottled at 50% ABV - but I thought it went further than that. In my head the government had an active role in overseeing the bonded warehouse and maybe observing the actual bottling, and that was the point of the whole thing. How naive!

As George Dickel distiller Nicole Austin pointed out, all pre-taxed liquor warehouses are bonded warehouses. So any non-blended whiskey over 4 years old bottled at 50% can be stuck in a bottle and labelled as BIB; there's no special extra process to it. Most single barrel bottlings would meet that if they were bottled at 50% (not that there is any real definition of single barrel).  BIB is just a weirdly specific set of rules.

Speaking of rules, there are some neat things in the wording of bottled in bond spirits on the government's website that I don't usually see spelled out.

So gin and vodka can be bottled in bond if they're stored in non-reactive wood containers. No wonder we don't see any of those on the market.

They can't have any additives. I assumed this, but never see it spelled out when reading about BIB products. I guess because mostly BIB products are straight bourbon and can't have additives anyway.

Putting Bottled in Bond in Context

We frequently hear the BIB Act of 1897 as the first first consumer protection law, predating the Pure Food and Drug Act by nearly a decade. In an era when many whiskeys were blended and adulterated, this was a guarantee to the consumer of certain minimums.

But also the BIB Act seems to have changed the way whiskey was stored: pre-tax rather than post-tax, in bonded warehouses.

As Wikipedia states, "The practice was also connected to tax law, which provided the primary incentive for distilleries to participate. Distilleries were allowed to delay payment of the excise tax on the stored whiskey until the aging of the whiskey was completed, and the supervision of the warehouse ensured proper accounting and the eventual collection of the tax."

That's a huge deal, tax-wise. If you're aging spirits, imagine having to pay tax on every gallon of whiskey distilled four-plus years before you've sold it. That's a huge burden and this act would have been a huge relief.

[Note that I haven't researched if there was a way to defer tax payment previous to the BIB act, it's possible that this wasn't the first act to defer taxes but it could be.]

So for me, understanding the tax part puts it all together. In 1897 the BIB law guaranteed an unadulterated product to the consumer, and incentivized it to the producer via the tax deferment. I needed to understand both parts of this.

Today most mass market bourbon is 4+ years old and additive-free anyway, the only difference between regular and BIB bottlings is that most brands are blends of various ages and bottled at various proofs. I wouldn't consider bottled in bond products to be a higher statement of quality these days; just a quirky set of standards.

There are other quirky BIB laws like only having one distiller. This was pointed out at Wild Turkey where there are two master distillers (Jimmy & Eddie Russell) so they stick with their 101.

That specific part of the law confused me. It seems "one distiller" would be more readily signify "one company" than "one human." Because as to the purpose of the law, the goal is to avoid any rectification.