Using Burrata Water in Place of Egg Whites in Cocktails

Last week I received a pitch about the cocktails at Oxalis in Prospect Heights, Brooklyn. One drink ingredient stood out to me:

Breakfast Martini, inspired by the classic cocktail and exclusively offered during brunch, this frothy cocktail features burrata water instead of egg white and gomme syrup instead of orange marmalade, in addition to bergamot, gin and citrus. 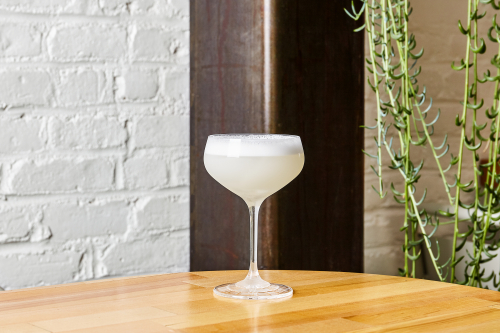 Lately bartenders' attentions are turning to egg white alternatives for cocktails, from aquafaba (chick pea water) to quillaja soap bark foamer to high-tech products with thickeners and emulsifiers. Burrata water would be another second-use ingredient

Oxalis' Beverage Director Piper Kristensen previously worked at Booker & Dax and Bearded Lady before joining Oxalis, which originally launched as a pop-up dinner series in 2016. I sent Kristensen some questions.

Was the burrata water an original idea or did you see it elsewhere first? I hadn't heard of this previously.
What is the quantity of burrata water needed to replace egg white? So I guess what's one drink's portion?

Where do you get the burrata water? Is it housemade at the restaurant or is the burrata purchased? (I'm wondering if it matters how fresh the water is or if people can use store-bought stuff.)

Is burrata water about the same amount of frothy as using egg white?

Does it have a flavor?


Cool idea! I may give it a try myself.

This is a super interesting and very cool idea. Love it. I've been using Aquafaba

This is a super interesting and a neat idea. Love it. I've been using Aquafaba in all of our bar program's egg white cocktails with much success but I am intrigued by this concept. My mind is spinning and I can already picture a few great uses for for it. Thank you so much for sharing!

Did I miss something? What is burrata water actually made from? I saw something about a duck purveyor but quite get it.

Yeah I'm not sure what the connection is to ducks - maybe they make burrata for something else. In any case, the cheese water is probably full of whey, which makes a nice froth whether you get it from cheese water or from the can.