After reading the detailed description of making the best aquafaba by Hannes Schmitt from Electric Eel on yesterday's post, I decided I wanted to try some experiments myself to see what makes the best, frothiest, least expensive, least smelly chick pea/garbanzo bean water frother.

In the first round of experiments I prepared 6 types of chick pea water and made the same drink with all of them:

In the first picture below, you can tell the relative colors of the bean waters. The cooking water was darkest, while the flour water was milky. 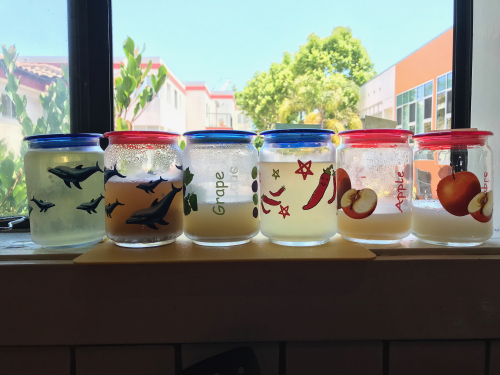 After shaking in a cocktail. (Number 5 had been freshly reshaken as I spilled some so it's a little more dramatic than in real life.) Note that the flour water #6 on the right has a greyish tint. 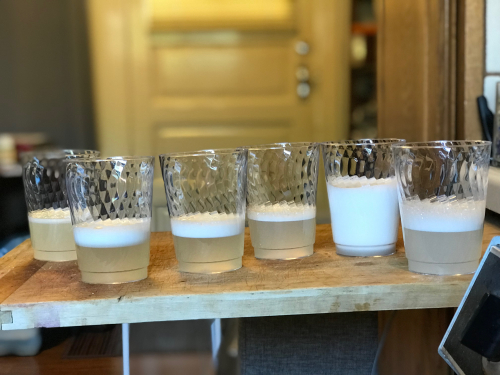 It seems that Schmitt's method of adding #2 to #4 (cooking water to post-cook soaking water) would combine some very thick water with a lighter one that still has some foaming action to minimize color and aroma.

The second boil water did produce nice foam, though the beans were probably ruined for anything but hummus after that point. But it did make me think about boiling beans for a super long time with more water to see if that would effectively give us more bang for the buck.

This inspired another round of experiments for the next day (and next blog post): Comparing boiled flour vs unboiled, and seeing if I could boil a small amount of rehydrated chickpeas for a long time to get a good aquafaba.

Next Up: Aquafaba Experiments Round 2

and then Aquafaba Experiments Round 3

@Alycia Sorry I didn't measure; I used a lot of water because I boiled it for a long time and much of it boiled off.