In my previous post I tried some ways to see what preparation method makes the best aquafaba: chickpea/garbanzo bean water used in place of egg whites to make cocktails frothy.

To recap, I found the best aquafaba waters were, in order:

In the next set of experiments I wanted to see if I could produce more water in cooking and see if I could use unboiled chickpea flour. So my aquafabas were:

For the experiments, I used a Disaronno Sour (2 parts Disaronno to 1 part lemon juice), plus 1/2 ounce aquafaba. 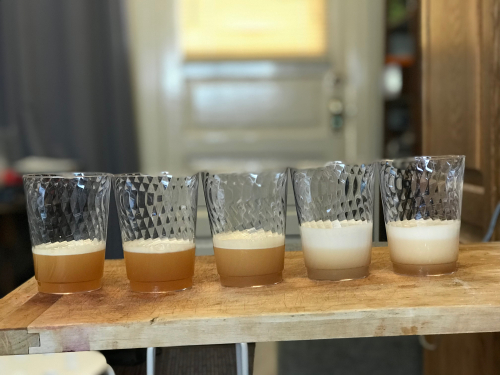 If this chickpea flour is working so well, maybe I should try using the smallest scoop possible I can of it. I did try this previously and found that the solids were too problematic, but it's worth another shot.

I've now tried it and here is the post!

Thanks for doing this and saving me the trouble;-)

Which version, if any, can be emulsified to a stiff peak? I want to use it to replace whipping cream.