In previous experiments with aquafaba to replace egg white for froth in cocktails:

I tried chickpea/garbanzo bean water from canned beans, from uncooked and cooked beans, and from chickpea flour both cooked and uncooked.

I found in those experiments that canned water was best for the amount and quality of froth produced, followed by uncooked flour water, followed closely by boiled bean water. 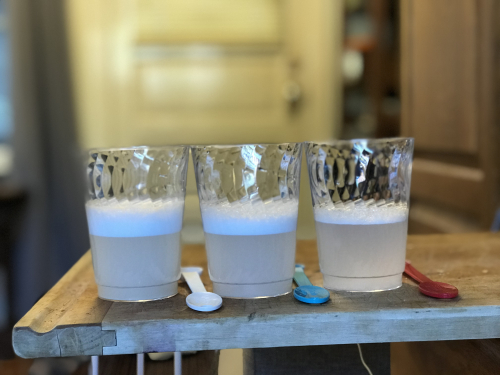 I found that 1/16th wasn't quite enough, but 1/8 teaspoon seemed to work just fine. (note this experiment was with vodka and water plus the flour)

One issue with using the flour (rather than water with flour in it that's left to settle as in previous experiments) is that it settles out relatively quickly to the bottom of the glass. That's why I wanted to minimize the amount in the first place. 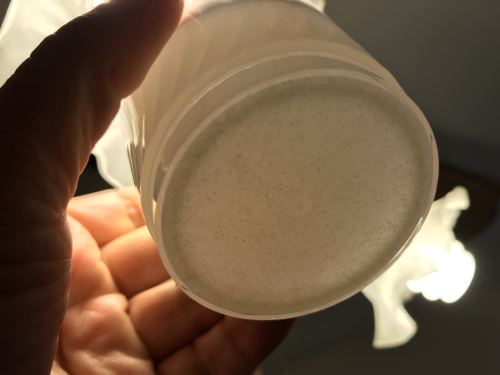 A second issue is the flavor: though not incredibly powerful, there are notes of raw flour and a slight tannic or metallic flavor.

On the plus side, if only occasionally using an egg white replacement in cocktails, chickpea flour is shelf stable compared with liquid. It might be worth testing to see if the flavor of the uncooked flour and the settling is tolerable.

However if you're hoping to use aquafaba more often or switch to an egg white alternative permanently, I would think you'd want something that doesn't settle in the glass and has less of a flavor impact. For that, I would return to the posts with the technique by Hannes Schmitt or Aquafaba Experiments Round 1 to see a few options.

Have you tried adding cream of tartar? I saw that here: https://minimalistbaker.com/a-guide-to-aquafaba/

Thanks- I wonder what flavor impact that will have. Worth a try!

Have you seen America's Test Kitchen experiment? Add cream or tartar to stabilize your foam. It'll likely make it taste a little acidic / sour for the tartaric acid.

I hadn't seen that - thanks!
https://www.americastestkitchen.com/guides/vegan/what-is-aquafaba

Some people use tartaric acid to mimic grape acids:
http://pote.com/CS/www.cooksscience.com/articles/story/balance-of-sour/index.html

So I wonder if cocktails containing wine products would naturally have a stiffer foam. The article noted that sugar helped and that would be present in every shaken cocktail.