A Cocktail Surprise at August (1) Five Restaurant in San Francisco

The awkwardly-named modern Indian restaurant in San Francisco's Civic Center August (1) Five revamped their cocktail program about six months ago with an ambitious drink menu of 23 cocktails and 3 tasting flights, one of which is for agave spirits. The cocktail program is the brainchild of bar manager Jeremy Harris.

The restaurant is located on Van Ness near Civic Center but more importantly near the symphony, opera, and the theater where Hamilton is playing, so a lot of the diners are there before shows. I think there were more people in the restaurant wearing tuxedos on my visit that not.

Because of its event-based diners, the restaurant is only open for dinner from 5-9:30 on weekdays and 10:30 on weekends. (There is also weekend brunch.) 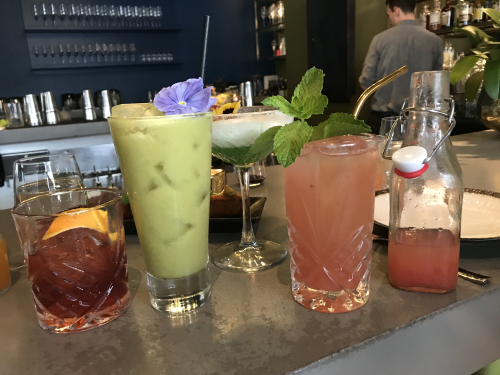 The menu has ten variations on classic cocktails that vary so far from their inspirations that they're sometimes hard to place; four bottled and carbonated cocktails; six non-alcoholic cocktails, and three punch bowls. 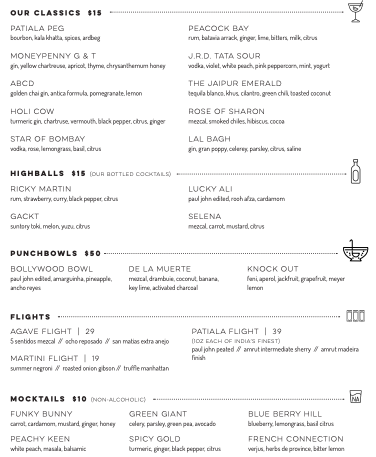 Of the bottled cocktails, I only tried the GACKT, which was made with suntory Toki whisky, melon, yuzu, citrus. It was pleasant and mild and the Toki was hard to identify, which happens a lot with Toki. 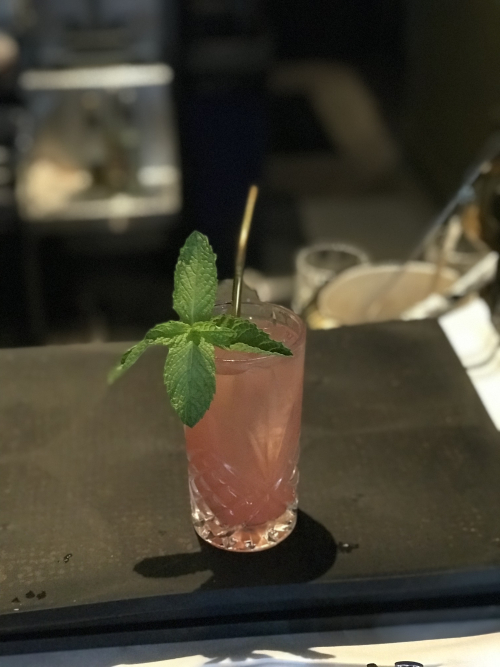 I was very excited to see so many non-alcoholic cocktails on the menu, which are there in part because the restaurant's clientele includes many non-drinkers who still like to come in big groups and enjoy cocktails. I'm starting to keep track of which bars and restaurants give time and attention to non-alcoholic options and this place is clearly a leader with nearly 25% of the list non-alcoholic.

We tried the Green Giant, which is made with celery, parsely, green pea, avocado, plus a touch of something sparkling. The drink is a take on a lassi with the avocado standing in for the yogurt. It was rich and intense and filling (and I love the 1960s kitchen color).  Other non-alcoholic options echo the flavors in a couple of the cocktails - mustard, carrot, turmeric. 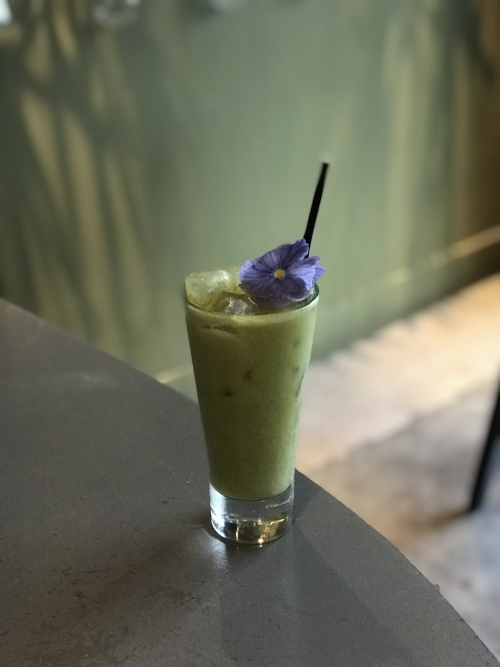 From the punch section, we were able to try a glass of the Knock Out, a super drinkable (okay "crushable" since it's still summer in SF) cocktail with a base of feni (cashew fruit brandy from Goa), Aperol, jackfruit, grapefruit, and lemon.  Restaurant owner Hetal Shah tells us that was the first alcohol she ever tried in Goa on a school trip, and she has not-so-great memories of that feni, but the one used in the drink is a more refined version. We were able to try some on its own and I kind of loved it. 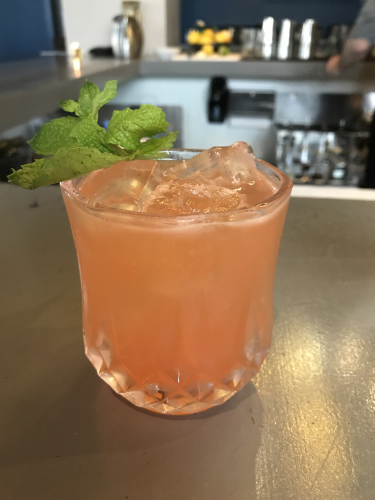 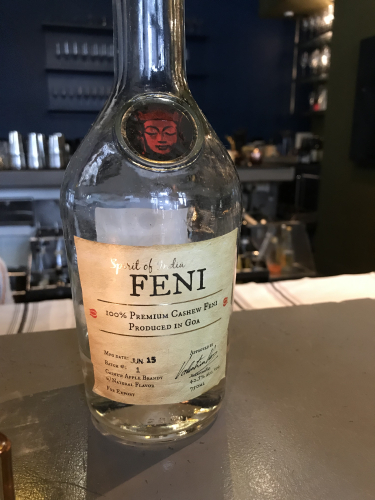 For the cocktails, I was really impressed with The Jaipur Emerald, which I think is based on a Margarita but as I said, it's often hard to tell the source of the inspiration here. In the glass with tequila there is khus, cilantro and chili providing that scary green color (and depth of flavor), with a foam made out of  coconut milk. The body of the drink is a little spicy (most of the drinks are a bit spicy) and somewhat woody/sandalwoody, and the coconut foam is rich and thick.  I love a drink that looks kinda trashy but delivers in the flavor department. So good.

I had to look up khus afterward, it is:

Vetiver (Khus) is also used as a flavoring agent, usually as khus syrup. Khus syrup is made by adding khus essence to sugar, water and citric acid syrup. Khus essence is a dark green thick syrup made from the roots. It has a woody taste and a scent characteristic of khus. The syrup is used to flavor milkshakes and yogurt drinks like lassi, but can be used in ice creams, mixed beverages such as Shirley Temples and as a dessert topping. 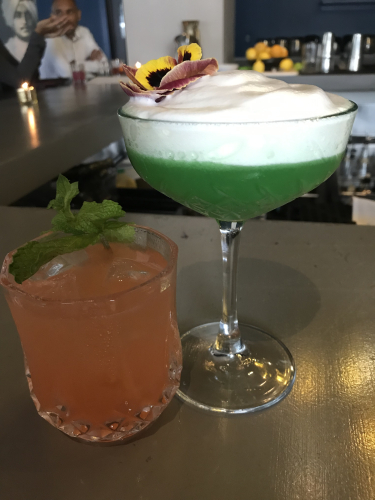 The Patiala Peg is an Old Fashioned variation with bourbon, kala khatta syrup (a bright red syrup made from Java plum), spices, and with an Ardbeg spritz on top. It was not as high-proof as a regular OF, easily drinkable. 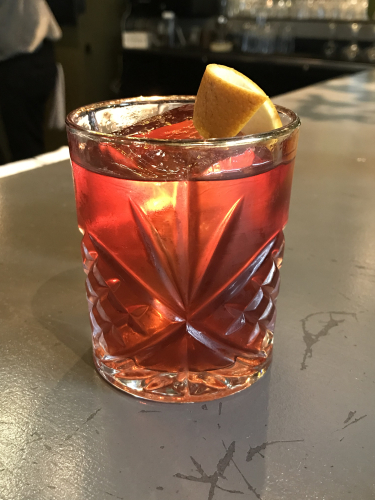 I loved the Moneypenny G&T, which again strays pretty far from the classic with gin, Yellow Chartreuse, apricot, thyme, chrysanthemum honey, and tonic. It tasted somewhat spicy and maybe vinegary, which I wouldn't have guessed from its ingredients, but in any case the result was a G&T that makes you pay attention to it rather than just gulp or down (or in the case of other modern G&Ts, wade through a field of garnish to try to drink it). 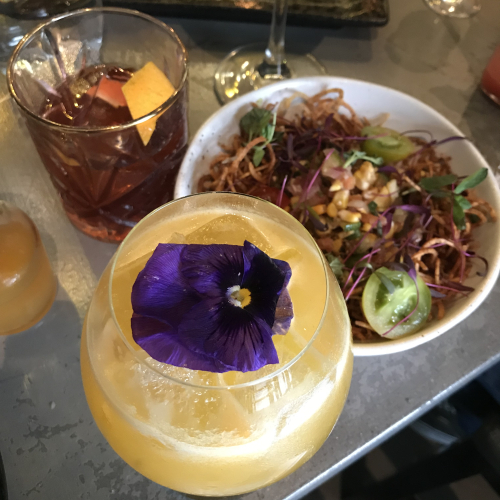 We also tried one called Glamping, which is graham cracker-infused bourbon (with a chunk of dry ice in it) topped with an Indian cracker and a marshmellow that they light on fire atop the drink.

The drink itself was pretty close to spiced bourbon rather than a full cocktail, while the cracker and marshmallow on top provided the sweetness and more flavor to the drink (while very much being a s'more). More of a fun way to do a digestif bourbon than a cocktail, but that's when we had it so it worked well. 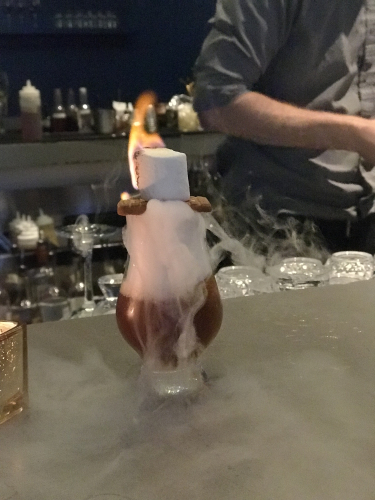 The food we tried was great too, but you don't read Alcademics for the food! I'm just saying get the food if you go there for the drinks. It has been very well-reviewed.

Overall I wasn't planning to do a full cocktail menu tasting and write-up on this restaurant but was so happy with what I tried that I wanted to give it greater attention.