Ramping up Aromatics in Cognac: How Camus Does it

When I was in China helping judge the Camus cognac Shanghai Shake, I had the opportunity to interview president Cyril Camus.

Recently the language on Camus' core line changed to invoke "intensely aromatic" language on the branding. Cyril says that this has rolled out in the US and some other markets, with more to come. They're particularly promoting the VSOP (using the phrase "Very Special" instead of VS on that marque). I asked Cyril about the reason for the rebrand/change in flavor profile- particularly from a marketing perspective. What was the consumer demand for the change, if any? Was it to be more useful in cocktails?

He says that this was not the case. "I think that the density of aromas and lower level of wood allows you to make more aroma-forward cocktails. It's good timing, but wasn't the reason we did it." 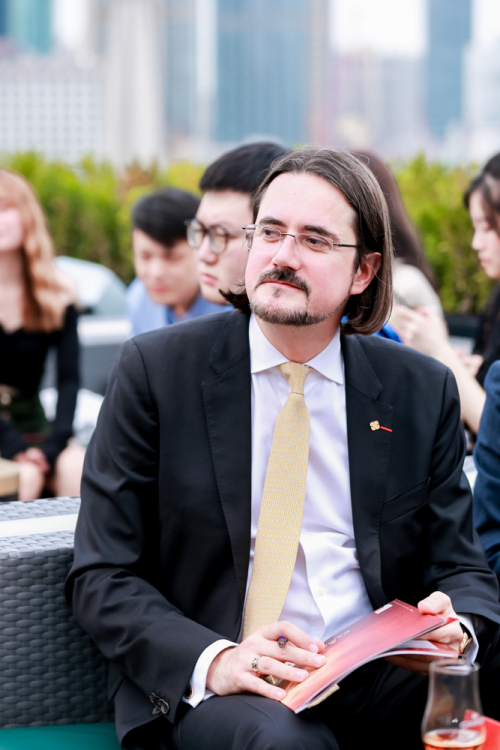 In the first place, I didn't realize that this flavor profile change wasn't instant; it's more of an evolution of flavor profile building up to the VSOP/XO of today. Cyril says about 15 or 16 years ago, they were trying to define from a consumer standpoint how people define or judge a cognac as the best. They wanted to have a "measureable, distinctive point" of quality over other brands so that they didn't need to rely on the typical language of 'a blend over over X cognacs aged up to Y years' that all the other brands use.

They determined three important factors: the density of floral aromas (which they measure via concentration of terpenols); density of fruity aromas (measured in count of esters); and the balance between fruit notes and wood impact. With this in mind, they set out to move the flavor profile towards something "obviously distinctive." 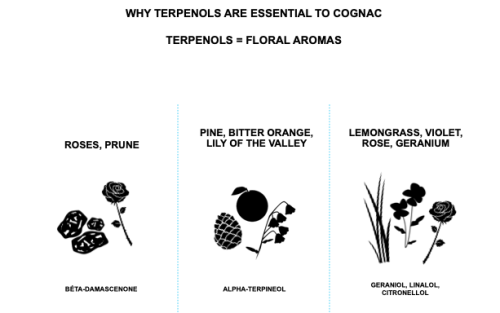 The biggest change made (about ten years or so ago) was distilling on the lees - the dead yeast and other particles from the winemaking process left unfiltered. According to their materials, this raises the amount of esters from 30mg/L up to 70 mg/L.

One thing that hasn't changed is Camus' use of grapes from the Borderies region, where Camus is based. Cognac from this region is said to be more floral than from other regions, and this adds to the terpenol count. The Borderies is only about 5% of the total cru for growing cognac grapes. 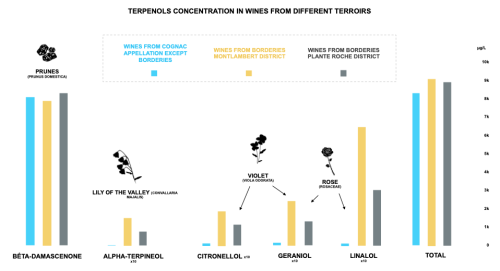 In the vineyard, they make efforts to have the best wine by putting weather stations in the vineyards (only about 10-15% of the grapes they use are from their own property) to know best when to harvest, and then harvesting extra-quickly with larger machines than are strictly necessary. As grapes are being transported to the presses they are seeded with yeast, which I'm guessing is to ensure any natural fermentation that happens along the way happens with their own yeast strains rather than the natural ones from the vineyards.

Camus distills about 90% of the wine sourced from about 200 growers (plus their own grapes), and the rest is distilled according to their patented process.

About that: another factor in ramping up aromatic intensity is including more of the heads of distillation in the product. Cyril says that the first 20L of the second distillation are the heads are removed and stored separately liter by liter. Cyril says that though the heads are known for being very aromatic and full of esters, they're also pretty unpredictable in quality. So the master distiller will go through and taste/nose the heads and include back into the heart the desired heads fragments. These heads are not aged separately but put into barrel with the hearts. 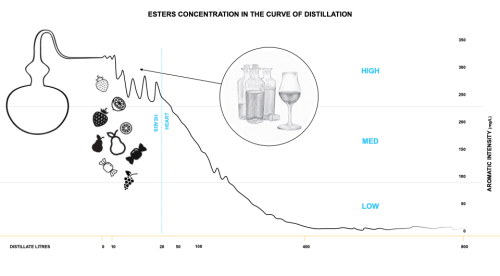 This brings up the esters from 30mg/L without lees to 70 with lees to 200 mg/L with their "intensity distillation" process. 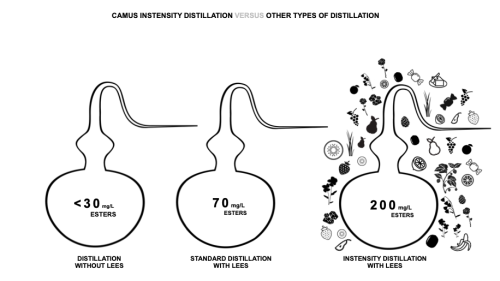 I asked Cyril if since they were making these adjustments gradually if the XO (a minimum of 10 years old) was of the same level of aromatic intensity as they were seeking to achieve with the VSOP. He said that distilling on the lees, which they've been doing for 10 years now, has the majority of the impact, and though the flavor profile will change a bit in the future years, those changes will be minor overall. But, he says, they're now in the position to explain to consumers why they're different.

As for the balance of fruit to wood notes, they're also using fine grain oak for their barrels low in tannins and lightly toasted to minimize the wood impact on the spirit. They also use older barrels that have had many of their tannins stripped already. 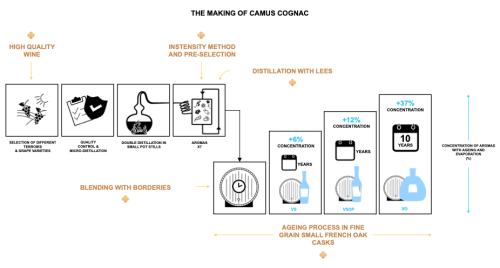 It's terrific to see some numbers and logic behind what a cognac brand is doing!