The Power of Traveling Startenders Back Home 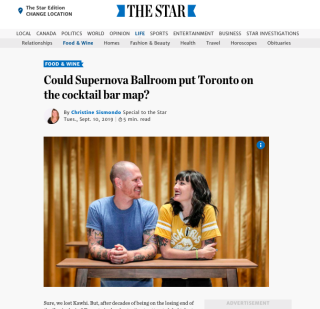 In Canadian newspaper The Star, Christine Sismondo tackles the question, "Could Supernova Ballroom put Toronto on the cocktail bar map?"

She's referring to the just-opening bar by Kelsey Ramage and Iain Griffiths in Toronto, and its potential impact on attention to the city's other bars as well.

I gave my two cents for the story.

“These days, many bartenders travel the globe giving talks and act, in a way, as brand ambassadors for their bars,” says Camper English, a San Francisco writer who has covered the international bar and cocktail scene for years, explaining a bit of the back-end dynamics of voting. “This inspires a lot of people to try to visit those bars afterward. With Kelsey and Iain’s world travels, you can be sure there’ll be a lot of people interested in seeing what they have going on back in Toronto.”

One way to ensure a bar's success appears to be: never being there. There are plenty of startenders who spend far more time on the road doing brand work and speaking at conferences than running the bars they supposedly run. (I don't know if Kelsey and Iain plan to heavily involved in the day-to-day or not, but given they have plans to speak to 10,000 bartenders in the upcoming years my guess is they couldn't be there too much even if they want to.)

The trick, of course, is that the bar needs to be in a place that global bartenders are willing to travel to - this model works great in NYC, London, and the like. Will more people make Toronto a stop on their global cocktail travels? Could be. It's not like it's a small city nor particularly hard to get to. The Toronto Cocktail Conference should bring a few people into town anyway, and the bar's founders are incredibly compelling.

I wish them, and Toronto, the best of luck.