You may have heard that a lawyer in Miami is suing Bombay Sapphire gin because it includes grains of paradise in the recipe.

The suit is due to a 150 year old law meant to prevent potentially dangerous adulteration of alcoholic beverages. Also included in the law were several other "adulterants." As posted to the HoochLaw blog, the law reads:

Whoever adulterates, for the purpose of sale, any liquor, used or intended for drink, with cocculus indicus, vitriol, grains of paradise, opium, alum, capsicum, copperas, laurel water, logwood, brazil wood, cochineal, sugar of lead, or any other substance which is poisonous or injurious to health, and whoever knowingly sells any liquor so adulterated, shall be guilty of a felony of the third degree.

When I saw this, I realized cochineal, a common red coloring derived from scale insects, would also render many spirits illegal in Florida if grains of paradise are.

One of those spirits is St. George Spirits' Bruto Americano, an Italian-inspired aperitif liqueur colored with cochineal.

Lance Winters, President & Master Distiller for St. George Spirits, sent me an email with his (amazing!) analysis of the situation.

To adulterate something is to corrupt it, often in an effort to perpetrate fraud by creating a counterfeit of something. In 1860 when this law was written, there were small rectifiers and liquor compounders across the country who would often "create" one spirit out of another.

For example, a "French brandy" could be made from a mixture of high proof grain spirits, Cognac oil and coloring. Another recipe in Lacour advises on making Cognac: "One barrel of whiskey, say forty gallons, add tincture of grains of paradise, one quart; powdered catechu, three ounces; mucilage of slippery elm bark, two thirds of a pint; oil of lemon, eighty drops; well rubbed in an ounce of dry white or brown sugar, and added to the liquor; then add six ounces of acetic ether".

As these recipes show, ingredients like those listed in the Florida law were often used to create imitation versions of spirits, hence the use of the term adulteration. Grains of paradise in particular were used for hundreds of years to make a spirit seem stronger than it actually was, allowing an unscrupulous compounder to label a spirit with a higher alcohol content than was actually in the bottle. Capsicum, also listed in the regulation, was often used to give the false sensation of a higher alcohol content.

The statement that the use of grains of paradise was "unconscionable" relates to [the lawyer's] prior claim of the spice to induce abortion. Grains of paradise are not an abortifacient. Their intense flavor was often used to mask the taste of abortifacients which were administered without the knowledge of the pregnant woman.

Cocktail Geeks will know that in the back of the original Jerry Thomas' Bar-Tenders Guide was the Guide to Manufacture of Cordials, Liqueurs, etc., which had similar recipes for adulterating neutral spirit to make gin, whiskey, etc..

Lance Winters then went on to describe what the other illegal ingredients were used for in adulteration:

Cocculus indicus was added to beer to promote a sense of giddiness. It's now commonly used as a homeopathic remedy for motion induced nausea.

Vitriol is good old sulfuric acid, used for the "beading" effect in liquor in an effort to further falsify alcohol content. If it's so dangerous, why is there so much food grade sulfuric acid available?

Grains of paradise were also known as Guinea pepper. In "Lacour, on the Manufacture of Liquor" (1853), an old how-to for both genuine purveyors and shysters, the author states that "Of the different varieties of pepper, none answers for the purpose of giving a false strength to liquors, except Guinea pepper; a tincture prepared from this variety has a taste analogous to alcohol, whereas the taste from the other varieties remains on the palate a considerable length of time after being swallowed."

Alum was used to intentionally impart roughness to wines, again (I assume) to give the sense of a higher alcohol content. We most often use it in pickles.

Capsicum was another tool to falsify alcohol content. It's also food. Packed with vitamin C. Say goodbye to pepper flavored vodkas in Florida.

Copperas is an Old-Timey name for iron II sulfate. Probably used to color spirits that were supposed to have some sort of herb content or to stabilize same. Now found in supplements for people with iron deficiencies.

Laurel water was distilled from the leaves of the cherry laurel and consisted chiefly of prussic acid. Probably used to give almond notes to artificial kirsch. Totally poisonous. Not going to argue that one.

Logwood is a dye, brown, red and purple. Not sure about its toxicity, but was probably used to give the impression of barrel aging.

Brazil wood would have been used in the same way.

Cochineal, same use, currently used to color foods and cosmetics. 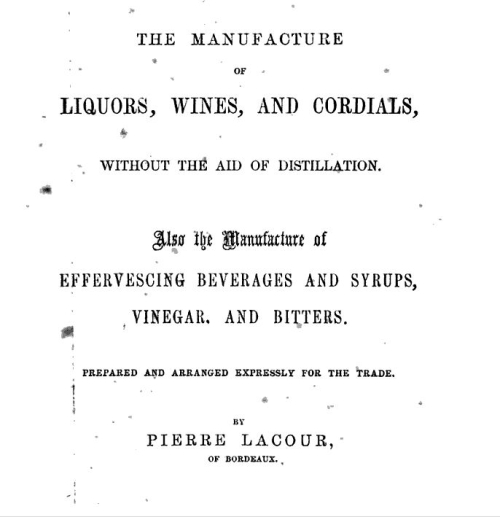 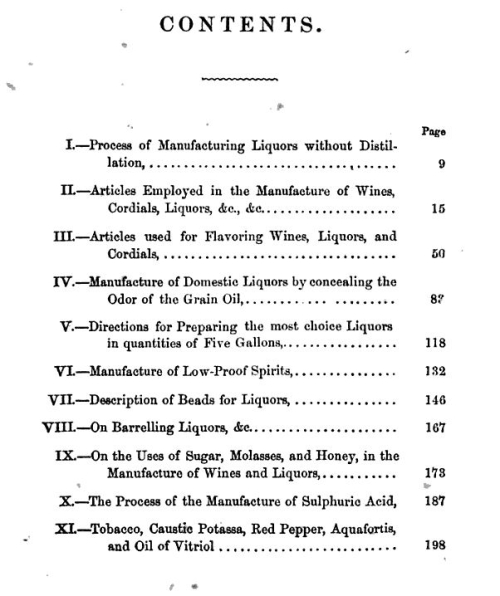 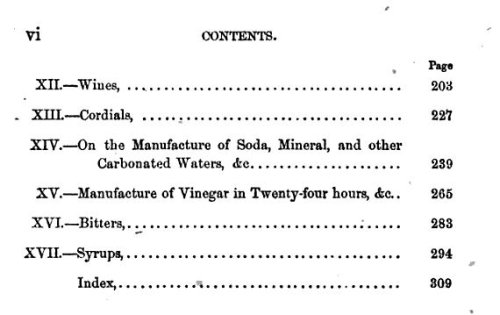 Thanks to Lance Winters for his analysis/rant in the form of detailed information!

As is probably obvious to all but the lawyer in question, the spirit of the law seems to be to prevent using these ingredients to fool customers into purchasing counterfeit and potentially dangerous alcohol. Most of the ingredients are Generally Recognized as Safe by the US government, so they're permitted in the standard production of food and beverages.