I attended Bar Convent Berlin 2019. This was probably my sixth trip to Berlin for this most excellent bar show. My talk on CocktailSafe topics had a standing-room only crowd, so my trip was a success.

Below are a few observations from the show.

There was so much new gin at the show I didn't bother to try to discover any new ones. In the show guide 164 gin expressions were listed - and I think that undercounts how many were actually there by a lot. It's just a complete overload with companies producing six+ expressions each.  It seems the minimum line is a regular gin, a navy strength, and an Old Tom style gin, but a lot of these brands have a range of flavored gins bordering on trashy. Is gin the new flavored vodka? Yes, absolutely without a doubt gin is the new flavored vodka.

I hadn't really noticed this shift but now it's clear that DeKuyper has their eyes on the long game, using famous bartenders to introduce new luxury liqueurs to the world. At the beginning of this year Muyu liqueurs launched. It is a line of three liqueurs with from each of Alex Kratena, Monica Berg and Simone Caporale.

And just in the past month, they've also launched a chocolate liqueur with Joerg Meyer of Le Lion de Paris called Dutch Cacao, and a mint-ish liqueur called Acqua Bianca with Salvatore Calabrese.

I know that at least the last two were developed with Rutte Gin distiller Myriam Hendrickx, so chances are the first three were too. 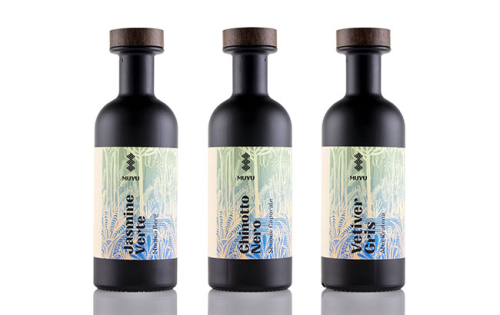 The team behind Ancho Reyes (that Campari just took a majority stake in, announced while at the conference) have put a new focus on Mexican corn. They're close to launching Nixta Licor De Elote (corn liqueur), in the most spectacular bottle. I posted it to Instagram and it kind of blew up, so I guess I should produce more corn-related content there. 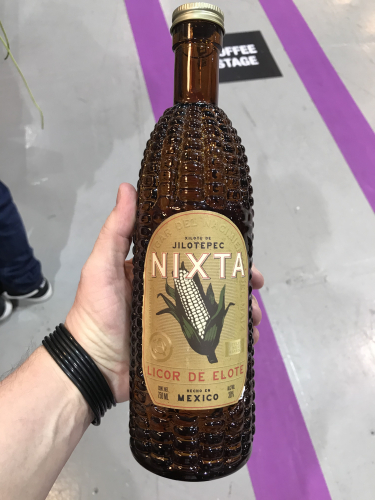 They've also built a corn whiskey distillery and are launching the first product soon. The brand name is Abasolo Whisky but it appears the website isn't up yet. A scan of the flier is below. I'm not sure if this distillery and future brands are included in the sale to Campari, but from the press release it does not appear so. Nixta licor is produced at this distillery, according to the flier. 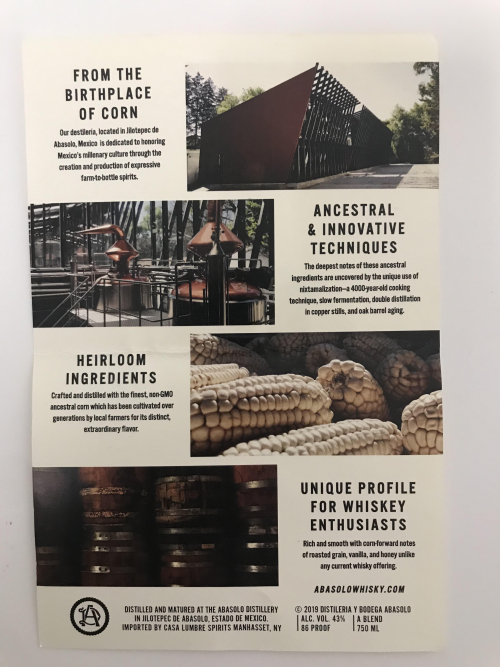 I also had the opportunity to try the Hayman's Small Gin - In the era of "non-alcoholic spirits" (see below), Hayman's took an extremely interesting approach. Recognizing that alcohol is the necessary ingredient for botanical flavor extraction, rather than producing a 0% ABV spirit, they made an extreme gin concentrate at 43% ABV so that you only need 5ml (1/6th ounce) of Small Gin in a Gin & Tonic, rending it pretty close to non-alcohlic. The little bottle comes with a thimble to use as a jigger.

I think this is cool as the other n/a spirits do alcoholic extraction then dilute it down to less than .5% ABV with water and preservative ingredients to be legally non-alcoholic, while this is somewhat more pure and honest by keeping it at the alcohol level at which it can function. Just for fun, I decided to do a rough calculation of how much of Hayman's Small Gin it would take to make a 700ml bottle of non-alcoholic gin:

Since the recommended dose of Small Gin is 5ml per drink, it would be far too watered down in flavor with only 7ml in an entire bottle. Which goes to show that the non-alcoholic spirits are actually working quite hard to pack in that much flavor at such a low proof - and I have newfound respect for the skill of their makers! Math is fun. 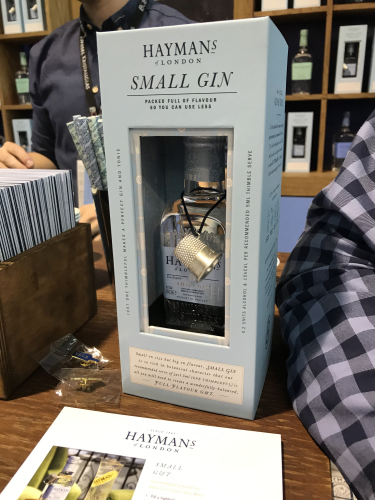 A Push for Purity

Purity Vodka is my go-to recommendation when people ask me for basically "vodka, but expensive" gift for their friends - it's great quality and wins all the awards. The brand standard is the 34 times distilled expression - which was the only product for the first few years of its existence back when I visited the distillery.  I've never been a fan of counting the number of plates in the still as number of distillations, but was the brand has expanded into new 17 times distilled and 51 times distilled expressions it makes more sense. Tasting the line against each other really shows how vodka can change in flavor profile from an expression of its raw ingredients into a more neutral (they'd probably say 'refined') spirit.

I spoke with CEO Mathias Tonnesson who said that in the USA, they're concentrating on consumer markets in specific areas with good sales. Apparently Atlanta is a big market for them.

Purity is also launching a line of gin - a London Dry style, a Navy Strength, and an Old Tom style. It's amazing how the touch of sugar in the Old Tom really pushes forward the botanical mix. They're also launching a "spritz" that is meant to be consumed on it's own or mixed with sparkling water, sparkling wine, or tonic. 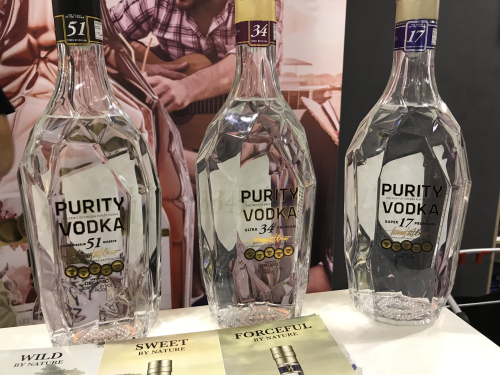 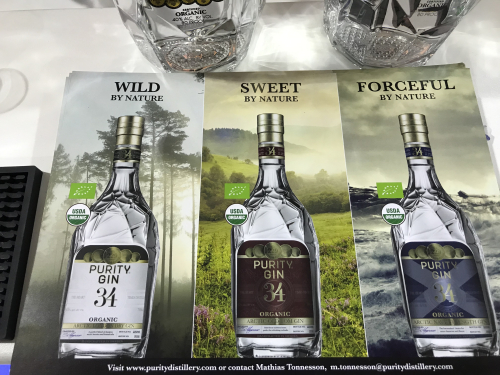 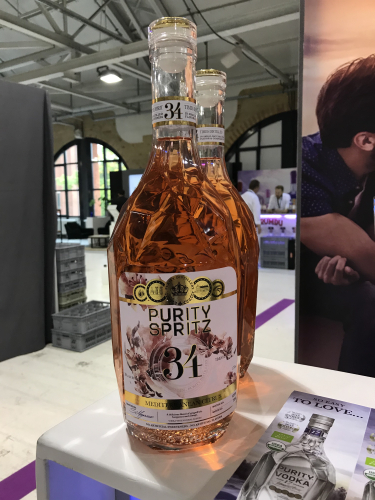 The Rooster Factory developed with Armagnac Castarede Gaspard de M. Armagnac Distiller’s Cut armagnac. There's a year-rested blanche and a young aged armagnac, both priced for use in cocktails. This could help give armagnac the push it needs to take its place among the great mixing brandies. 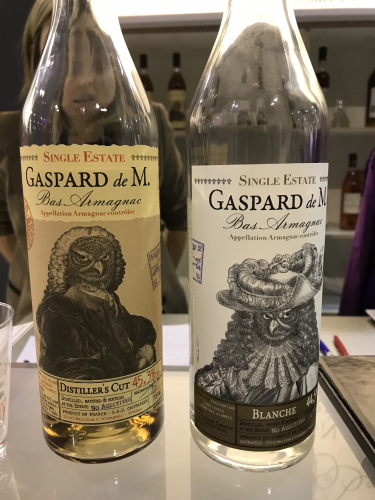 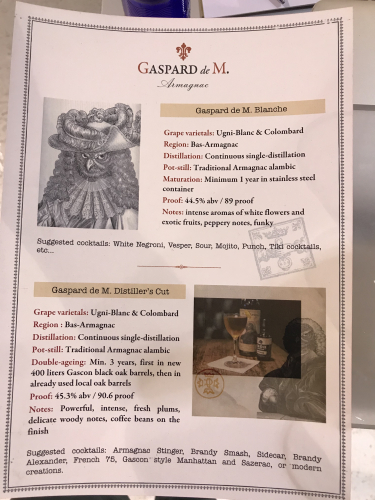 I knew coming in to BCB that there would be a number of "non-alcoholic spirits" in the style of Seedlip to sample. Most of these brands are probably just looking for distribution so don't expect to find them on store shelves, especially not in the US, any time soon.

Speaking of Seedlip, I was able to try their Aecorn  line of aperitifs and really enjoyed them. They also announced a bottled NoGroni Negroni variation that I can't wait to try. I found with Aecorn, the Bitter Note, and other products that the more complicated aperitif/digestif spirits seem more interesting/fully realized than the n/a base spirits - but not all products are trying to be versions of gin, vodka, etc, but something else to stand in for those base spirits while bringing real flavor to the eventual cocktail. 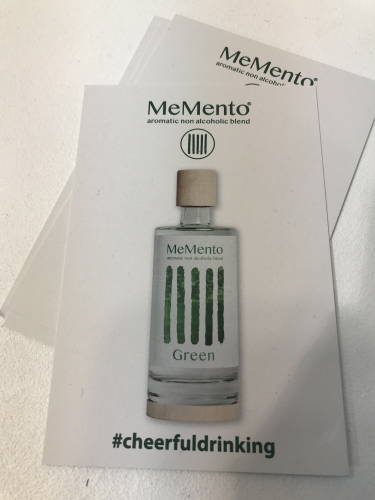 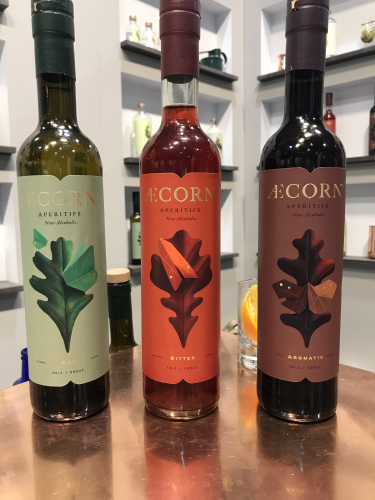 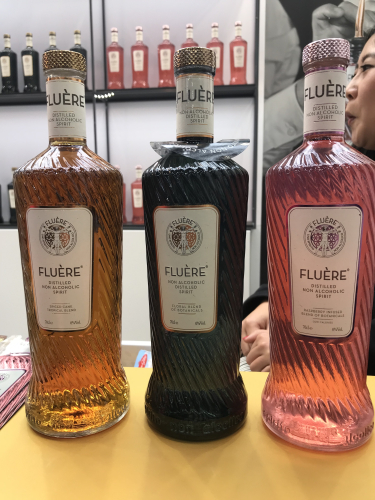 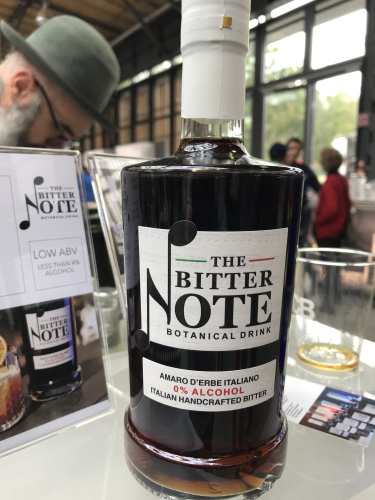 So that's it for this quick report. I'm pretty jetlagged right now.

Camper, is that Hayman's Small Gin available for sale in the US yet?

I love your comment of gin becoming the new flavored vodka. It just exposes the opportunity that most distillers have. Either that or a majority of people are running toward lo or no alcoholic spirits.

It is not currently in the US, but they said they were meeting with their importer Haus Alpenz soon, so if they're interested (and I hope they are!) then perhaps we'll see it in 2020.

Too late for my gin-loving pregnant wife haha but great!