I sent a list of 100 questions to the cellarmaster of Hine cognac, and am sorting through the answers in a series of posts. In the first post, we looked at cognac from grapes to wine. In this post, we'll take the wine through distillation.

Hine cognac is located on the banks of the Charente River in Jarnac, one of the three principle cities of cognac production along with Cognac and Segonzac. Even before cognac was produced in the region (Hine dates to 1763), the river was used to ship salt. Now the river isn't used commercially as far as I know, but the moist air the pervades the cognac aging cellars near the river bank and plays a part in developing the character of cognac. Hine is also unique in that they sell "early landed" cognacs that aren't aged in the Cognac region, but in England. We'll talk about aging in a later post.

As we covered in the last post, it is common for cognac makers to own some of their own vineyards and purchase wine from other growers. Similarly with distillation, some brands distill more or less of their wine or leave it to the winegrowers to distill.

In the case of Hine, as I learned when I visited in 2014, nearly all of their wine is distilled at a distillery called St. Denis. This distillery works with a lot of brands - they estimated that Hine is only 10 percent of their output.

Legally cognac must be twice distilled in direct-fired Charentais pot stills, and distillation of the wine (which is stored without sulfur preservative) must be completed by March 31.

A diagram of the Charentais still is below. You'll recognize the pot still with it's bulb cap on the right, and the coil for the condenser that cools vapor to liquid on the left. But what's that thing in the middle? 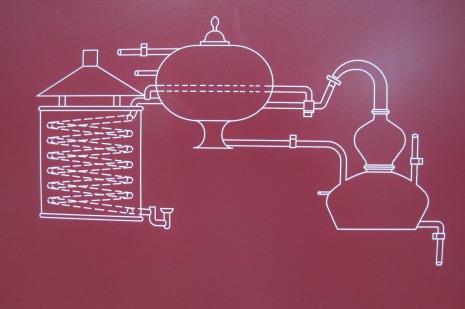 That's the wine warmer, an efficiency enhancement fairly particular to cognac production. Before distillation, wine is stored in there, and during the previous distillation run (wine in the still), a tube runs through the wine warmer on the way to the condenser. This heats up the wine so that when it is put into the still for the next distillation run they'll have to expend less heat/energy to do so. Smart!

Each distillation takes about 12 hours, so it's a full day for each still's worth of wine to be processed into eau de vie. You can see why they need from the end of harvest in the fall until March 31 to complete distilling all the wine for cognac.

Now, as cognac brands working with winegrowers pre-specify the strain of yeast to be used, they also specify distillation parameters such as the number of liters collected (the size of the heart cut), the speed of distillation, and whether or not to distill on the lees. I asked Hine Cellarmaster Eric Forget if they specify this all in advance or if it changes along the way. He wrote, "Everything is fixed by tasting, and could be changed every week."

Everything except for distilling on the lees that is. 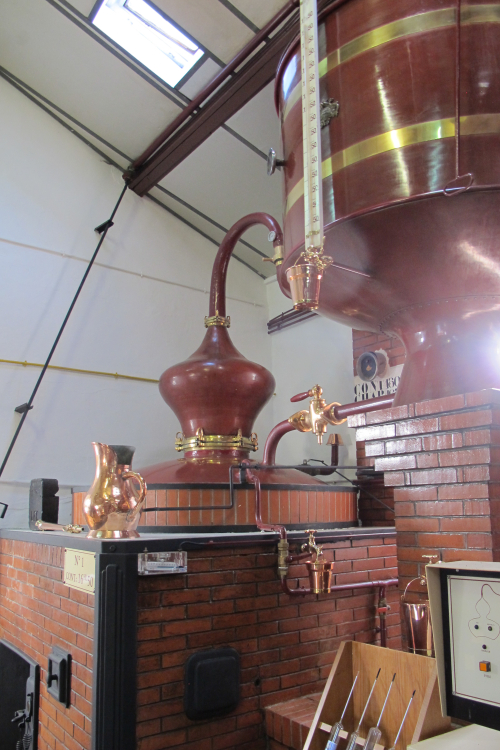 Distilling with the Lees

Lees are the dead yeast cells left over from fermentation. Some brands distill "on the lees" and others filter them out first. As lees are solids, there is always the danger of them sticking to the bottom/sides of the still and burning, creating off-flavors. Forget says this is a "crucial point" about distilling on the lees and the care that must be taken.

I wanted more information about distilling on the lees, so I went to the definitive source, Nicholas Faith's Cognac (2004 edition). Some quotes from that section (p24):

Moreover the lees need protecting from the air before the wines are distilled and cannot safely be used late in the distillation season, once the external temperature has risen much about 10C.

And, as one distiller pointed out, "lees means that you need time for the brandies to mature and provide their additional complexity."

The yeast lees contain a number of esters, including three fatty acids, which turn out to be absolutely critical in giving the cognac its much prized rancio (a particular rich, cheesy flavour) quality when it is in cask.

... virtually all the producers in the Grande Champagne I have come across distill on at least some of the lees, if only because they are producing brandies destined to mature long enough to absorb the resulting richness in the brandy.

I decided to look up which brands distill on the lees and which do not. I had heard of the "Big Four" brands (Hennessy, Remy-Martin, Martell, Courvoisier) that only Remy distills on the lees, but when I went to confirm that I ran into inconsistent information.

Does not distill on the lees: Martell

Some with and some without: Courvoisier and Otard/D’ussé [source], though Courvoisier's website says it does distill on the lees but doesn't specify if it always does [source]. Hennessy distills on "fine lees" [source]. But overall I wouldn't count on the accuracy of this information - my guess is that some of their eau de vie may be distilled on the lees but generally not. As we learned from the Nicholas Faith book quotes, VS cognac (only lightly aged) wouldn't be a good fit for brandy distilled on the lees and we know in the case of Hennessy for example that VS is something like 80 percent of their sales.

In any case, back to Hine: I was wondering if there is such thing as "reduced lees" or "partial lees" or something like that to impact flavor to a lesser extent. Forget said (speaking about Hine specifically), "We distill all lees but filtered to avoid big impurities. There is never too much lees."

So what the impact of lees? Usually we hear that they add a nutty taste and more creamy body/texture to the resultant eau de vie; that distillation with lees allows for a "more complex" spirit versus a "cleaner" spirit without.

Flavor Impact of Distillation on the Lees

I asked cellarmaster Eric Forget what are the production parameters that he felt make the most impact on determining Hine's house style - what makes Hine Hine? He noted that distillation on the lees was the second most important factor in Hine's flavor profile:

He said:  "Terroir has the most impact. Only (grapes from Grande and some Petite) Champagne region." Second, "Distillation with lees." Third, "Aging in fine, medium-grain oak barrels that are lightly charred." and fourth, "The differentiation is made with these three key points together, and a balance between the elements of the raw material (wine) and the wood."

We'll cover those third and fourth factors, among others, in the next several posts after the new year.

And if you haven't read it yet, check out the first post, "Cognac from Grapes to Wine." 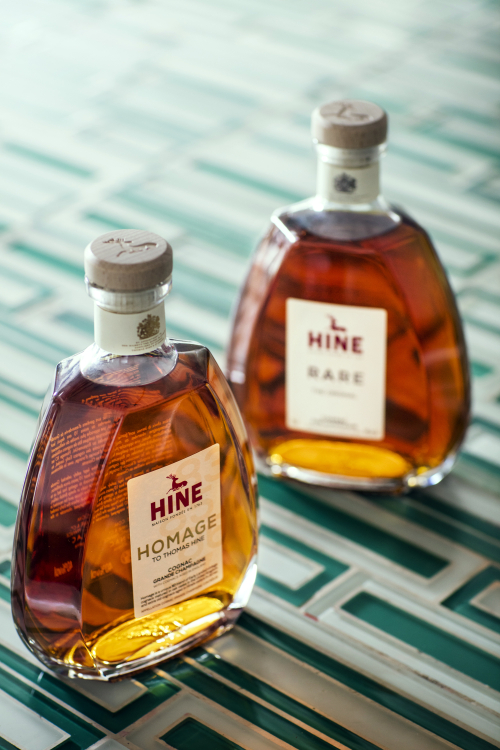 I'm enjoying these Cognac pieces, thanks! I don't think wine heaters are unique to cognac, charentais style stills using them are employed all over the spirit world (rum, Pays D'Auge calvados, grape brandies, pisco, etc), and the principle of preheating incoming wash by cooling outgoing vapor is how most continuous stills work, including those used for armagnac, calvados, and even bourbon. Similar but slightly different many scotch producers preheat the incoming wash with the out going hot stillage. Energy is money

True I should have said "unique to the charentais still" but I still would have been wrong. Especially as I just figured out how sour mashing uses it! https://www.alcademics.com/2019/06/sour-mashing-as-industrial-waste-recycling.html
I guess I was naive in my statement as in the case of this still it's built into the still design.

Thanks for sharing part two of this hine series here. The information shared about cognac here is fascinating, and I can utilize this information in one of my papers. Keep up the good work, my friend.