This is the first in a series of posts I'm doing with Hine cognac. I sent Hine cellarmaster Eric Forget a list of one hundred questions (really) about Hine's production a few weeks back, and am sorting through the answers over several posts.

For those unfamiliar with Hine, it's a brand founded over a quarter century ago in 1763. Beyond offering VSOP and XO blends, they have a whole series of vintage-dated cognacs and "early landed" cognacs that I'll write about in a future post.

We'll first talk about making the wine for cognac, and later cover things like distillation, aging, bottling and filtering. 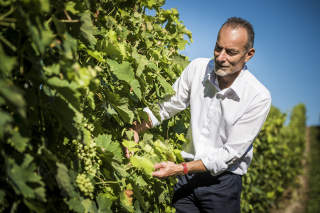 Grapes for cognac must come from the Cognac region, which is split into six crus. Grande Champagne is the central and most important cru, followed by Petite Champagne, Borderies, Fins Bois, Bons Bois, and the Bois Ordinaires/Bois a Terroirs. The latter includes an island!

Grapes grown in Grande Champagne are considered best for long-aged cognacs with floral notes dominant, according to the website of the BNIC, the "coordination and decision-making body for the Cognac industry." Petite Champagne has similar soil type but according to the BNIC's website, there is more influence from the ocean climate in the region; and it produces grapes with more predominant vine flower and fruity notes.

I asked Eric Forget if there were really large differences in grapes from the two regions and he replied, "It could be very subtle in accordance with the location and terroir," which I think means "not really." I followed up by asking if you could tell by eating a grape which cru it came from? The answer was a solid "no."

The other crus are known for bringing out notes of violet (Borderies), pressed grapes (Fins Bois and Bons Bois), or general fruit (Bois Ordinaires) when distilled.

Hine uses only grapes from Grande Champagne for most of their older bottlings - the XO Homage and Antique, and other bottlings including Triomphe, plus the vintages we'll get into on a later post. For the XO Cigar Reserve, they use Grande Champagne, Petite Champagne and Fins Bois distillates.

For Hine's VSOP products (H by Hine and Rare) they use Fine Champagne - which is the technical term for cognac with grapes from both Grande and Petite Champagne. 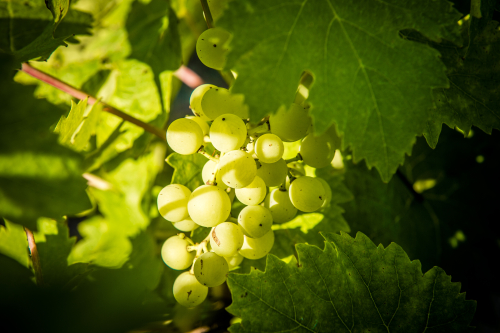 As seems typical, Hine owns some of their own vineyards but purchases most of their wine from winegrowers. Hine owns 70 hectares (173 acres) of vines in the Grande Champagne region, and this supplies about 30% of the total wine they need. This seems like a lot relative to the larger brands.

I asked Forget why not skip the hassle and just buy all the wine rather than make your own? He said, "The first reason is to secure the supply, and of course to make super wines." And do they consider their wine superior to that of the winegrowers from who they purchase wine? "We try to do our best but we select also the suppliers for their professionalism."

I asked what specific instructions Hine gives to winegrowers - how the grapes are treated, when to be harvested, etc? Forget said, "We give them a quality chart for production and keep in touch all along the year. For the cultivation, the appellation itself is very strongly involved in these topics."

That's pretty interesting and makes sense - it's not only the growers or the cognac makers/brands that get input as to the treatment and quality of the raw material for cognac, it's the region's administration that will have a say to ensure quality standards. I bet those meetings get... tense as conditions change every year.

By the way, 98% of the grapes are ugni blanc in Cognac.

Forget says they use dry commercial yeast, and start fermentation at 17 C (63F). Fermentation continues until it completes naturally, so it will generally undergo some malolactic fermentation.

The fermentation reaction is undertaken by the family of lactic acid bacteria. Malolactic fermentation tends to create a rounder, fuller mouthfeel. Malic acid is typically associated with the taste of green apples, while lactic acid is richer and more buttery tasting. Grapes produced in cool regions tend to be high in acidity, much of which comes from the contribution of malic acid. Malolactic fermentation generally enhances the body and flavor persistence of wine, producing wines of greater palate softness. 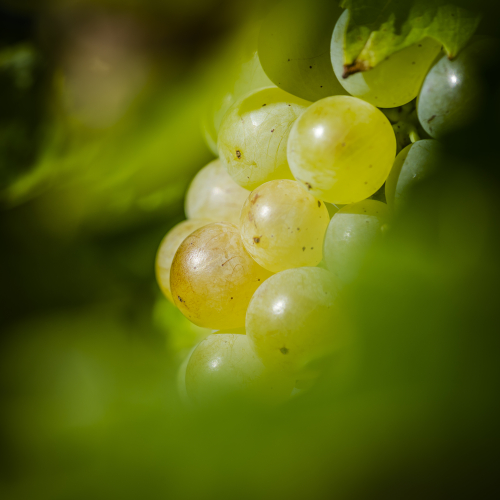 On my previous visit to Hine (I wrote about it in this blog post), Forget predicted that he expected to harvest grapes that would make 9.5% alcohol wine at about 3.4 pH that year.

I asked him what is the usual range for ABV and pH in wines for cognac, and he said 9 to 11% ABV and 3.2 to 3.5 pH. [Note that this is pretty acidic - while limes and vinegar both hover in the 2-3 pH range]. In addition to the pH and potential ABV (based on the sugar content of the grapes), then temperature must also be taken into account for fermentation.

Harvest usually runs September and October, and grapes are pressed right after harvest and made into wine. No sugar is allowed to be added in this process, and the wine is not preserved with sulfites as it would really mess up distillation later.

Distillation, which we'll get to in another post, is done in pot stills which are slow and inefficient, so this means that all the wine made after harvest has to be stored and kept fresh until it can be distilled. With no sulfites to preserve it, the BNIC has set a legal cut-off date: all the wine for cognac must be distilled before March 31.

How they revent oxidation of grape juice when it is pressed?

@Aleksa - I do know know if from the field to the press if they do anything (can't add sulfur or anything) such as refregeration, but after it's pressed it's in enclosed stainless temperature controlled tanks until it's ready for distillation. A blog post on a previous visit is here: https://www.alcademics.com/2015/02/a-daylong-visit-to-cognac-hine.html