I'm in the middle of a series of posts about how cognac is made generally, with details from Hine cognac cellarmaster Eric Forget  about how Hine is made specifically.

Hine offers a special blend meant for mixology (H by Hine), other VSOP and XO blends, single vineyard cognacs, and many vintage-dated cognacs. 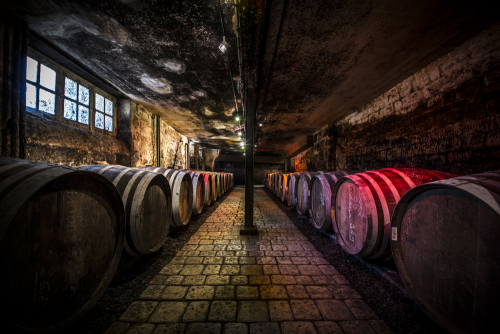 Today's post is about aging in those barrels we discussed last time.

I think one of the most interesting things about cognac is how its aging is not static. It does not go into a barrel and remain there until its transferred to the blending vat and bottle, unlike many (most?) spirits.

As I'm trying to make clear with this set of blog posts, cognac is not, as many brands seem to imply, a masterwork of blending starting from a huge supply of random barrels that have been just sitting around aging without manipulation. Cognac is designed; cognac is made.

Right off the still, cognac makers have an idea about what will become of the brandy. Of course they know where the grapes were grown and whether those areas (and those winemakers) produce eau de vie that ages well over a long time or a shorter amount of time. An initial determination is made of the new make distillate if it might go toward a VS, VSOP, XO, or even longer aged product.

According to Nicholas Faith's book Cognac (that I'll be quoting from a lot) the richness, oiliness, and sheer concentration of the spirit's flavor tells you whether it will open up over a long time or be ready to drink in a few years.

With an idea (that will be confirmed with tastings over the years) of where the new-make spirit will end up, decisions are made about in what type of barrel it will age and in what type of warehouse and for how it will age long right off the bat, and they'll keep the liquid moving between different situations as predicted and as needed.

Cognac is usually put into a new barrel for a certain number of months. New barrels give up a lot of tannin, so the eau de vie is then moved to an older barrel after that.  Note that "new" doesn't necessarily never been used before, but under a certain few years old, usually three years old.

According to the Faith book Cognac, if the year had been especially wet with a lot of rainfall, the cognacs could come out very flabby so they might age for a bit longer in new barrels; the opposite if it was a very dry year. Though it's rare, some other cognac producers only age in older barrels - that would be for marques that are destined to age a very long time.

As cognacs age, they will likely be moved to older and older barrels, and then possibly to a glass demijohn to freeze it in time. 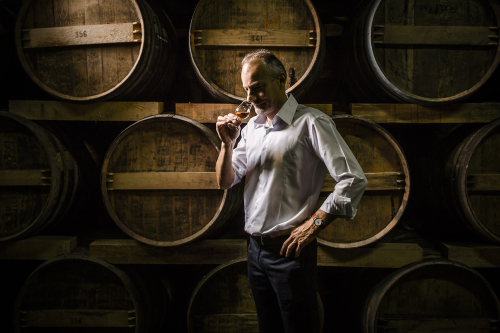 Depending on the brand, every barrel is tasted annually or more often than that. Then it may be redirected into a different barrel or placed in a different cellar to attempt to bring out its best aspects.

Aging cognac may be combined and diluted at certain intervals, and then redistributed to barrels. For example, cognac that will become an XO may be taken out the barrel, blended with other barrels in a big vat, diluted to x% ABV after 2 years, then again to a new lower ABV at 5 years, then again at bottling. (I am making these time points up but the point is that cognac can be combined, diluted, and rebarreled multiple times over its life.)

This is a good point at which to move a parcel of aging eau de vie from its current barrels to new-to-it ones.

Barrels give up their tannins and lignins over the years, and at some point they basically become a neutral vessel, allowing the exchange of oxygen but no longer being additive. Still, different cognac houses have limits on how long they'll leave cognac in a barrel at all to prevent it from becoming overly woody. 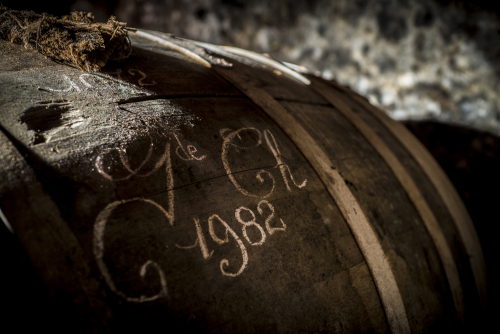 There are different types of cellars for cognac- dry and wet. The rate of water evaporation will be impacted by the humidity of the warehouse. If it's very humid (wet cellars in basements and/or close to the Charente river) then not much water will evaporate from the barrel compared to alcohol. If it's dry, more water will also evaporate compared to alcohol. (The angels' share in cognac is generally about 1% ABV per year for the first ten years, then a slower rate after that.)

Also, in Faith's book he writes that super dry cellars also retain a youthfulness of cognac flavor, while super wet ones will taste extra mature. I didn't check with Eric Forget of Hine, but I would assume this means that cognac designated for the premier long-aged products would more often age in the wet cellars, as maturity is highly valued.

Forget says, that "wet cellars make rounder cognacs, versus dry, which give more liveliness." I asked him if you could tell just by tasting whether a cognac was aged in a wet or a dry cellar. He replied, " It could be only possible only if they stay a long time."

In an extreme case over a long time, a wet-cellared cognac would lose proof in the barrel and eventually could drop below 40% ABV and no longer legally be cognac! (Before this happened it would be moved to rest in glass demijohns to prevent it.) Faith's book says that after 50 years the cognac will still be about 46% ABV, so in order to go below 40 it would really need to be extremely old.

The great houses of Cognac are located along the Charente River not for the view, but for the access: barrels of cognac used to be floated down the river out to sea on flat-bottomed boats. For the same reason, the old cognac cellars are also located along the water. Newer ones are located away from the river, tend to be drier without the river air, and may be temperature-controlled.

So cognac could also be moved from wet cellars to dry cellars or the reverse depending on how the barrels are aging. I do not know if this is common.  I asked Forget if barrels tend to stay where they are or are moved from one type of cellar to another. He replied there are "no fixed rules."

Finally, I asked Forget if certain blends are made from some combination like 30 percent from wet cellars and 70 percent from dry ones, but he dismissed it. "No, tasting is the only element."

So, at the end of the day you can choose your vineyard and your distillation parameters and your aging routine to try to make exactly the right brandy for a specific blend in the house style, but ultimately it's still up to the cellar master to redirect the liquid as it changes and to assemble the final blend from the barrels they've nurtured.

Stay tuned for a few more posts in this series! 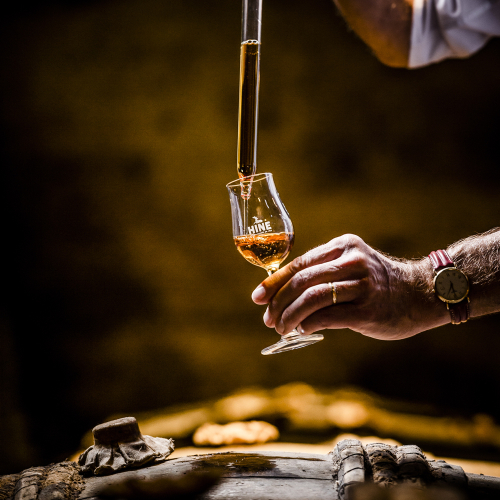