Cold Brew Coffee, Coming Soon to Booze with a Flavorful Base

Coffee is coming back to spirits in a big way, and now it's likely to be mixed with a flavorful brand you already know.

A while back we saw a new line of artisan coffee liqueurs including Firelit, which I wrote about for the San Francisco Chronicle in 2010, St. George Spirits Nola Coffee Liqueur, (a couple others in there somewhere), and more recently Mr. Black Cold Brew Coffee Liqueur based out of Australia that's been making a really big push into craft cocktails. But these all have a neutral base I believe.

More recently we saw Jagermeister release a coffee expression, which was an interesting surprise but makes sense from a flavor standpoint (not that I've tried it yet).

A smaller release was an amaro with coffee from Long Road Distillers:

Long Road Distillers has released a new spirit, Amaro Pazzo, this week. Amaro Pazzo was created in collaboration with Madcap Coffee Company and utilizes Madcap’s Reko coffee as one of the primary ingredients in the finished product. In addition to Reko coffee from Madcap, Long Road Amaro Pazzo, is made with myrrh, turkey rhubarb, two types of orange, wormwood, and a blend of other ingredients. It is bottled at 57 proof, or 28.5% alcohol by volume.

But now we're seeing several non-liqueur brands diluting their aged base spirits with coffee too.

FEW Spirits announced an bourbon whiskey diluted with cold brew coffee instead of water in November 2019. 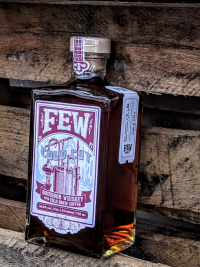 As this is Few-distilled bourbon cut, or proofed, with cold brew coffee — rather than blended with it — this product remains a bourbon, and is not a liqueur. Few Cold Cut is bottled at 46.5% ABV (93 proof). An initial 1,000 cases will be available nationwide this month in 750-ml bottles., for a suggested retail price of $44.99-$51.99 each. 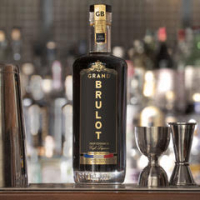 Crafted by the Tardy Cognac Family, Grand Brulot is comprised of the finest ‘eaux de vie’ from a blend of Ugni Blanc & Colombard grapes from its single-estate which is then crafted into an elegant 80 proof VSOP Cognac that sits to age for 4-5 years. Then, 100% Robusta Ecuadorian coffee bean essence is extracted and blended with brandy to meld for a couple of months before it is blended with the VSOP Cognac. The final product, with its equivalent of one shot of espresso per serving, is superlative; a real crowd-pleaser that works beautifully in all sort of drinks for a variety of occasions —from apperitfs, to dinner pairings and digestif cocktail options— the choices are endless.

And I just saw that Jameson Irish Whiskey has entered the fray with a new product just announced.

Jameson, an Irish whiskey manufacturer, announced its new Jameson Cold Brew on Friday -- to the assured delight of spiked coffee fans everywhere. With 17mg of caffeine per shot of whiskey, it lets you get caffeinated and buzzed simultaneously.

What else might the future hold? It makes a bit more sense for coffee to be added to aged spirits, but that certainly won't stop a (probably UK-based) gin from putting out a coffee gin. I don't think they've found a low to which they won't go.

I can see a peated whiskey doing this- smoky scotch with smoky coffee? Sure. Scotch whisky by definition cannot be flavored so it would have to drop that wording from its labelling. Other whiskies made with peated malt are growing in popularity even in the US, so that's certainly possible.

Coffee Rum - Oh yeah, I forgot that's already a thing. There's already George Ocean coffee rum, Grind Espresso Shot Rum, and Koloa Coffee Rum, though I'm not sure if these add sugar or not. Without looking I think Patron's XO Cafe is a liqueur as well, but I could see some anejo tequila with coffee hitting the market.

If I were a spirits producer, particularly a small batch one from the US trying to stand out in the crowded "craft" market, I'd look into it. Maybe that robust cold brew could help cover up the sawdust taste of aging in too-small unseasoned barrels!

Thanks for this, Camper!

For coffee amari, there are a few others available. J. Rieger Caffe Amaro (from the Kansas City based whiskey distillery) has been around since 2016, and it's carried in many Midwest craft bars. Bittermens New Orleans Coffee Liqueur is, as to be expected given their main business line is bitters, pretty bitter, and made with chicory and coffee. I had Caffe Lucano in Italy several years ago, but it's hard to source in the US. Galliano Ristretto and Coffee Heering are also kind of in that category--not quite amari, but they have a pretty bitter finish (and higher proof) compared to most coffee liqueurs. And there's also Molinari Caffe Liquore, a blend of anise-flavored sambuca and coffee.

For coffee rum, Brinley's from St. Kitts is pretty decent (as are their other flavored rums). Definitely has added sugar, but it's not artificial tasting like the big producers such as Bacardi, Cruzan, etc.

I figured I was missing a bunch. I think the real new product news is in the non-liqueurs like the Jameson and FEW (which I've tried and it was very interesting). But the amari make sense in that coffee is bitter too. Unfortunately I can't drink much of it.