Matching the Fitness Program to the Liquor Brand

The largest trend behind the scenes in the mixology community over the last decade has been LONGEVITY. Turns out now that bartending isn't just something you do while your acting career takes off, it's helpful if you learn how to do this career for more than a few years.

You know how liquor brands in the 80s and 90s had to be sexy models or have a Scottish accent? I've been joking that in order to get a job as a brand ambassador now you need to be a part-time yoga instructor or financial planner.

In order to create and retain bartender affinity, big and small liquor brands alike are sponsoring programs and talks for industry on things like accounting, Excel, retirement planning, career development, management training, bar ownership, fitness classes, sober events, workplace ergonomics, moderation in drinking, and the like. None of these programs have anything to do with the liquid inside their products. I guess they just want everyone to live longer and happier; that's not so bad.

I was interested when I saw a bartender Facebook event series of New Years Resolution-themed fitness activities listed from Bacardi brands, and some of them were actually, surprisingly on-brand.

The Bacardi rum one is a beach clean-up. (Because, you know, islands have a lot of beaches.)

Oxley gin, which is advertised as being "cold-distilled," sponsors cryotherapy sessions.

Martini & Rossi vermouth has long had associations with racing and (I think more recently) cycling, so they're sponsoring Flywheel sessions.

Ruby Wilson, portfolio ambassador for Bacardi brands, said "I came up with the idea of building a “class pass" style calendar and opened it up to all the ambassadors to participate. There were obvious pairings that made sense through past programs (Martini & Rossi cycling for example). For everyone else I suggested embracing what the individual ambassadors enjoy doing on their own time."

For the other brands in the portfolio - Banks rum, St. Germain, Grey Goose, Teeling Irish Whiskey, Aultmore -  they were more personal decisions from the brand ambassadors - fitness programs they were doing independently, or that were located near where they and other bartenders lived. They include TRX, industry yoga, pilates, and an urban hike. 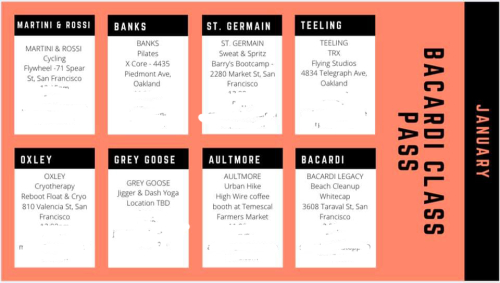 This is some of the calendar. It's only open to bartenders so don't crash the party!

I dunno, I feel I could think of interesting matches for those last few brands. Let's brainstorm...

St. Germain Elderflower Liqueur - Supposedly elderflower collected by gypsies on bicycles. I don't believe it for a minute, but I believe in foraging, and there is a company that leads foraging tours. I am dying to go seaweed foraging with ForageSF.

Grey Goose Vodka - I mean, a hike to go bird watching. That one was easy.

Aultmore Single Malt Scotch Whisky - They're going for an urban hike and there are plenty of great urban hills/mountains around here to mimic the Scottish countryside, so they're doing pretty good already. Maybe they should add some interval runs in there to replicate the breath control necessary to play the bagpipes.

I think I've been at work too long.

How about hang gliding for Grey Goose (you know, aircraft flying without engines after hitting geese :) )