Sour mashing, typically used in whiskey making, is adding some of the yeasty liquid still waste (stillage) from one distillation to the next batch's cooking/fermentation.

I previously wrote (from a post about souring at Jack Daniel's):

"Souring" is not like sourdough starter in that the process' job is to remain consistency between batches. "Souring" means lowering the pH, making it more sour/acidic. "Sour mash"ing is adding backset (stillage) from the previous distillation run to the next one. The stillage contains lots of dead yeast that is food for the new yeast, but also it is acidic and lowers the pH.

I later learned about how that hot stillage water is a form of industrial waste recycling.  (And for something really nerdy, check out this post on how sour mashing compares to Jamaican muck pits and baijiu production.) 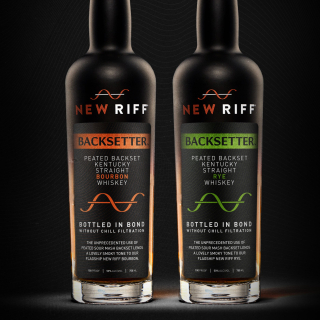 This is all a set-up to say I learned something new - sour mashing as a way to transfer some flavor from one batch to the next.

Last week I received a press release from New Riff Distilling. They have a pair of new products out called Backsetter whiskeys - both a bourbon and a rye.

Like all New Riff whiskeys, the Backsetter whiskeys are crafted with the traditional, time-honored sour mash Kentucky regimen, which utilizes a portion of grain “backset” from a previous distillation in the mash of the new batch. Utilizing backset from a distillation of peat-smoked malted barley and rye, these whiskeys are definitely a new riff on an old tradition.

So the only peat flavor in the whiskey comes from the portion of stillage of a previous batch of peated whiskey.

In follow-up emails, I learned more. New Riff doesn't currently have a peated whiskey on the market, so where did they get the peated backset? New Riff co-founder Jay Erisman replied, "These two Backsetter whiskeys followed the distillation of a 100% peated malted barley whiskey, which is today resting in our warehouse and, yes, presumably someday to be released."

And because that first peated product doesn't seem to be a regular item (not sure if one-off or a regular batch), that means that the Backsetter could only be made in one batch too.  Erisman  confirmed, "At this time, we have only this one release of Backsetter Bourbon and Rye. We are making more this very year, but that will be a four year wait."

So that means that a peated whiskey line is most likely in the works too.

I also saw the 95% rye recipe and asked if it was made at MGP. It's not. Erisman wrote, "Our rye recipe is 95% rye, 5% malted rye — not 5% malted barley. It is different and discrete from the Indiana rye, and was entirely mashed, distilled, aged and bottled at New Riff. We were, to be clear, consulted and trained by ex-Seagram's master distiller Larry Ebersold, the original creator of the famed 95% Indiana rye. So certainly our rye is a descendant of Larry's work, what to us is a local tradition (MGP is 30 minutes away, here in Greater Cincinnati as we are) of very special rye whiskey."

Long story short: I thought it was pretty interesting! Do you know of other whiskies that have done this?