Canning Water to Degas it for Clearer Ice

We know that the cloudiness in ice comes mostly from trapped air and impurities, which usually are pushed to the center of an ice cube when it freezes. The technique of directional freezing just relocates the air to one end of an ice cube/block rather than eliminates it. [see all the ice posts on Alcademics here]

Many people have attempted degassing the water to remove the air in various ways - mostly by boiling it, but others have tried putting it under a vacuum. As far as I know, nobody has been successful at fully degassing water so that the ice made with it comes out perfectly clear.

Today's post unfortunately isn't a fully-degassed ice system either, but it does seem to point to a fairly large visible improvement by using water that has been "canned" - using a canning technique but canning water alone appears to improve the clarity of ice made with that water. Newell used an Instant Pot to do the canning, making it super easy. Traditionally-canned water also works.

The below image is of "canned water" that was cooled and then set into aluminum thermoses to freeze with directional freezing. Note that there's just a tiny amount of cloudy water at the bottom. 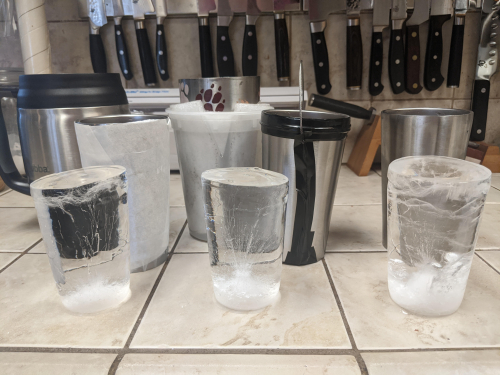 This is compared with non-degassed water in the same thermoses: 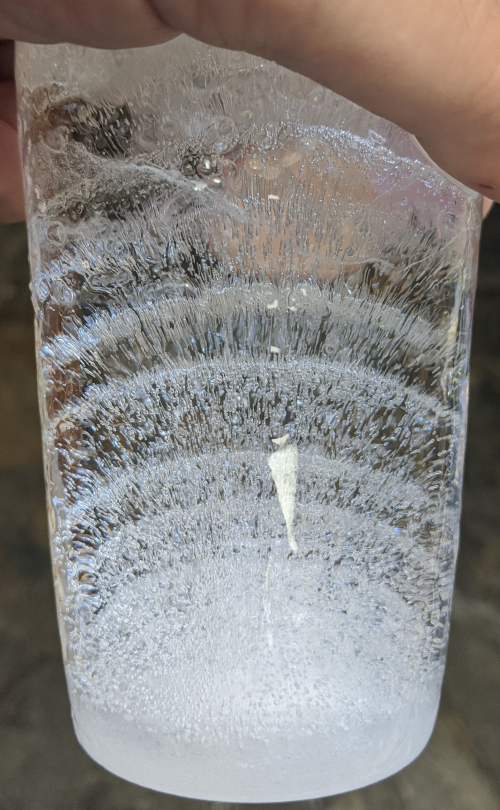 We went back and forth in email so this is an edited version of a series of emails and later experiments. Newell says:

I have had success in removing the gas in the water using a combination of boiling and vacuum with various set-ups, some more complicated and labor intensive than others. Then, I discovered this simple and nearly foolproof technique: Use traditional canning techniques and "can" the water in a pressure cooker. Especially with an instant pot type cooker this is dirt simple and doesn't require much labor or monitoring.

Then, I use the top-down freezing technique to make blocks of ice that I then mold into spheres. [The image above is "canned water" frozen inside insulated thermos, so directional freezing from top-down.]

I use filtered water, mainly since the local tap water tastes so bad. I fill some mason jars with the water with a 1 to 1.5 inch head-space, put on the lids and rings "finger tight" only and set them in a water bath in the cooker.

I put them in the electric pressure cooker for at least the 8 minute automatic cycle, and walk away until it completes. When it is done, I release any remaining pressure, remove the jars, and fully tighten the bands.

As you can see, there are no bubbles, and the top-down freezing left almost no minerals in the top section of the ice. The bottom-most part, is of course, cloudy. After a lot of experiments, too numerous to detail, this method is the most simple and foolproof I have found.

I confirmed that Newell was using glass jars, not fully filled with water and not submerged completely in water, and that there is air headspace in the jar when he does it. This is important because my assumption would have been that any headspace in the jar would contain air that would reabsorb into the water.

The head-space fills with steam during the pressure-cooking, and when the jars cool the steam condenses and creates a vacuum, sealing the lid. So, the head-space is essential to pull the vacuum used to seal the jars during cooling. The lid acts as a one-way valve: during heating the lid lets steam escape (which is why you don't tighten the bands completely before cooking; the jars might explode), and then during cooling the lid gets sucked down to the jar and seals. The drop in pressure actually causes some more of the hot water in the jar to boil as the headspace cools.

Thus, there really is not that much air in the jar to reabsorb... the head-space is filled mostly with water vapor. I think the vacuum may help remove any remaining dissolved air in the water. I typically leave the jars sealed overnight, and freeze the water from them the next day, though I don't know for sure that this delay is necessary. But, it easily fits into my work flow and has become my habit.

I asked why tighten the bands (the lids) at all, and just pour it into the molds at this point?

That might work, but I haven't tried it. I always let the jars seal and pull an internal vacuum, as I described above. The jars usually seal themselves without tightening the bands, but just to make sure, I usually still tighten them during cooling.

Back when I was experimenting with simple boiling, I tried going direct from the stove-top to the tumbler, but it didn't really help. I suspect that the water, even when boiled for a long time, was never degassed enough. I believe that reduced pressure is an essential step, as the only experiments I have done that succeeded have all used a partial vacuum as part of the process.

I tried boiling followed by a vacuum, and this did work well. One way I did this was with a vacuum sealer (like a Food Saver brand bag sealer) that has a vacuum pump. You can buy an attachment for most of these type devices that fits over a mason jar to pull a vacuum in it without having to heat/boil it (to seal a jar of nuts, coffee, or flour, for example). But, this was a big nuisance and a bit dangerous to use with hot water. I also experimented with valves and other complications.

Then, I hit upon the pressure canning scheme, which boils the water (actually, at a higher temperature, due to the pressure), and pulls a vacuum inside the sealed jars during cooling, and is dirt simple.

Then Newell did some additional experiments:

I "canned" some water using low pressure (i.e., atmospheric-only, or "no extra pressure") where the boiling point of water is about 212 F. (Note, I am near sea level). This gave essentially the same results as "high pressure" canning using a conventional pressure cooker, or equivalently, an electric pressure cooker like an Instant Pot, that adds about 15 psi and hence water has a higher boiling point (about 250 F.).

I boiled this for roughly 20 minutes, to make sure the water in the jars reached the full boiling point. Then, I removed the jars and fully tightened the bands, and let them cool.

The results after top-down freezing look essentially identical to when I used the high pressure cooker (see below). Nice and clear with no bubbles except the artifacts at the bottom. 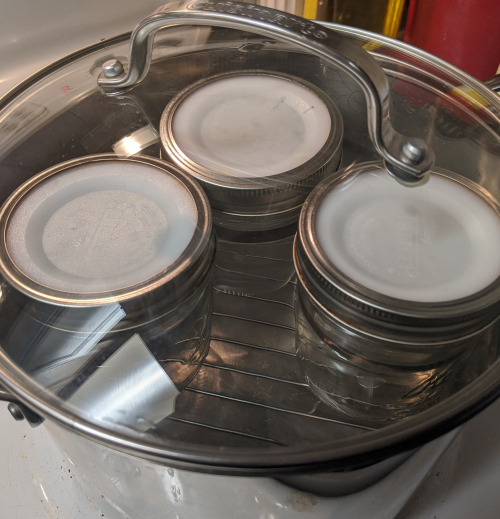 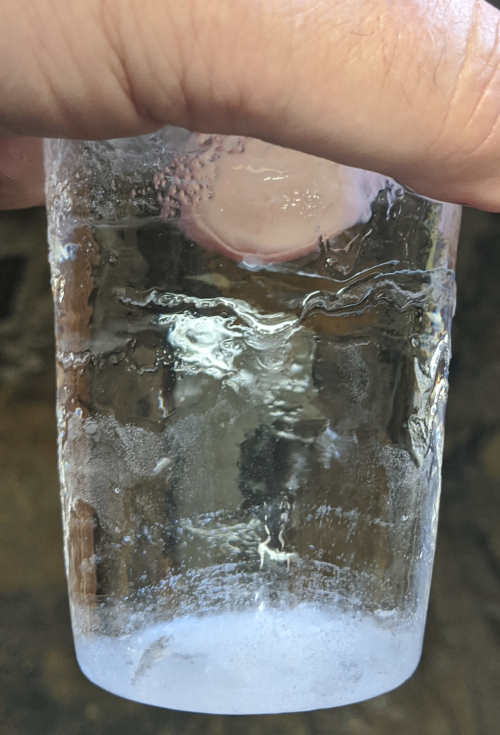 Finally, I also ran an experiment with distilled water. I took a quart of my usual filtered water and distilled a pint of "extra pure" water from it. This I ran through my usual pressure-canning de-gassing process, and then froze it. Here is the result (below). The distilling made no noticeable difference. Still clear in the middle (due to the de-gassing), but still having the same artifacts at the bottom after top-down freezing.

So, you don't need a pressure cooker to de-gas the water. A simple pot and a mason jar will do the trick. Distilling is a waste of effort. 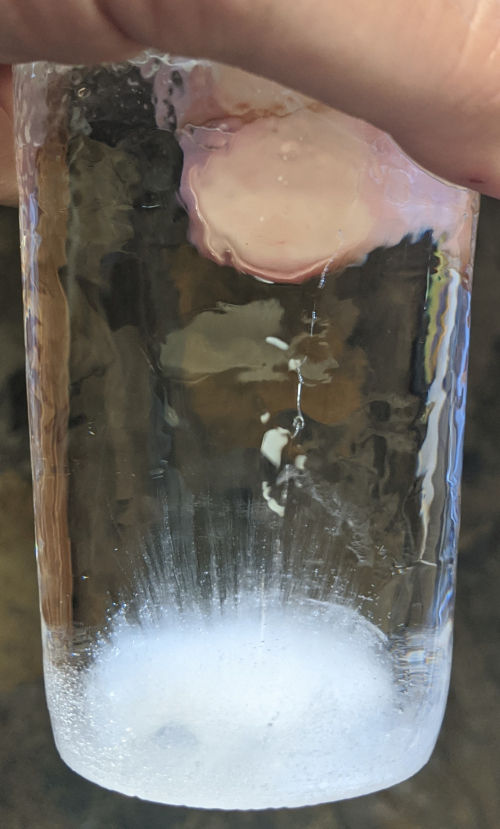 My belief is that as long as the jars seal and form an internal vacuum during cooling, the results will be satisfactory.

In conclusion, it appears in this set-up is effective at reducing cloudiness in ice.

If the pressure in the canning step in the Instant Pot is not crucial, then perhaps the main factor is that after boiling, the mason jars are sealed. Many of us ice nerds have tried boiling the water and then freezing it (with some improvement in clarity but in my estimation not worth the added effort)

So it appears that the sealed water doesn't reabsorb nearly as much air when kept under a vacuum as it would when cooling from boiling unsealed. I had always figured that water would naturally reabsorb most of the air when it was cooled to come to equilibrium (after being sealed or not), but maybe not!

This makes me want to do a bunch of experiments (or, you know, inspire you to do some experiments and share your results):

So... long post and lots of homework, but it's been a while since anyone seems to have come up with an improved technique so let's get to work. Thanks much to Richard Newell for doing the work and sharing it with us.

The index of ice experiments page on Alcademics is here.