An Attempt at Recreating the Canned Water Method for Clear Ice

A couple weeks back I reported on the work of Richard Newell, who sealed boiling water in mason jars in a canning system and found that it made great ice with few bubbles in a directional freezing system.

I don't have a canning system but I thought I'd give it a try with what I had around the house. It turns out I had a big jug, so I used that as my mason jar.

I boiled water for quite a while inside the jar inside a pot, and then went to screw on the cap of the jug - only to find that I didn't have a cap that fits the jug :( 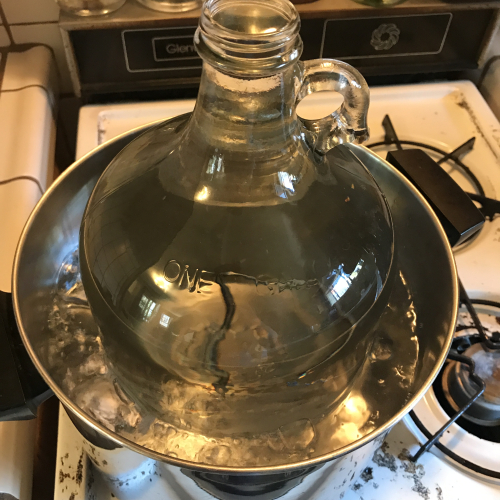 So instead I transferred it to glass bottles for which I have plastic corks. As you can see, I filled these up all the way to the top before capping them. 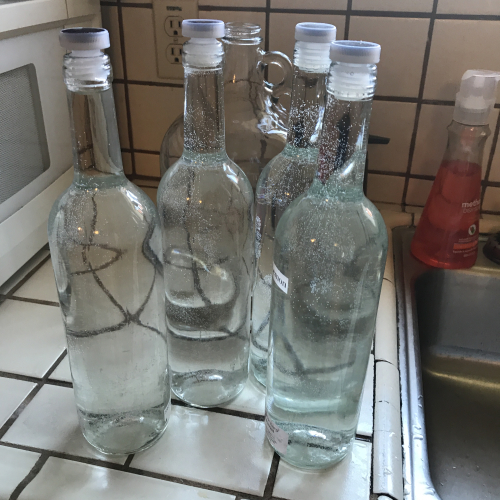 I put the glass bottles in the freezer to cool down before transferring them to my cooler for directional freezing. As you can see, after chilling there is a lot more space in the bottle. 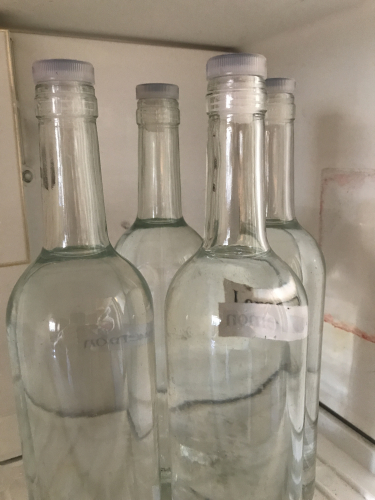 We know that hot water holds less air than cold water, so was this extra headspace the water reabsorbing air (meaning my corks weren't airtight) or that it pulled a vacuum as the water cooled? I'm not sure.

I poured the bottles into the cooler and froze it. Unfortunately, it did not appear that using boiled water "sealed" in bottles made for clearer ice than usual via directional freezing. It looks to be about 25% cloudy ice, which is normal.

I might have to try actual mason jars and seal them as Newell did initially to know if sealing up boiled water improves clarity in ice. 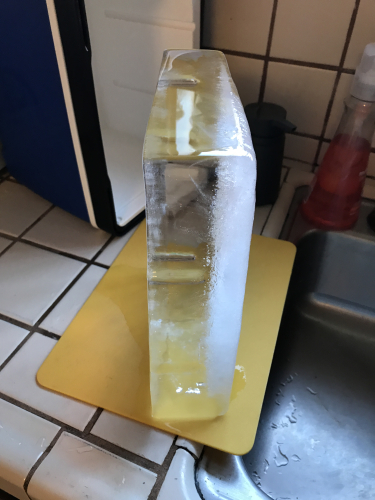 The index of ice experiments page on Alcademics is here.

I use your simple "open cooler in the freezer" method almost weekly. It works fine. The hands-on total time required to produce enough really cool (pun) large clear ice cubes is about 10-15-min. I've tried some of your other directional freezing tricks (silicone cube trays in an open cooler, ice ball molds in a small Thermos cooler), they work OK, but nothing beats the 15-min open cooler in the freezer method. Even the inch or so of cloudy ice at the bottom of the cooler is almost clear and is usable.

I follow your posts about various ice experiments, but for my large, clear cubes for my Old Fashioneds...If it ain't broke, don't fix it.

Thanks Pete - I'm the same, for everyday ice I use fill the cooler, "set it and forget it." I don't usually let it freeze until cloudy, but often I really do forget it and it does. I've also become good/fast at cutting it up - sometimes I don't let it temper and essentially smash it up; while other times I'll let it get nice and glassy and make cleaner cuts.
But with experiments like this it's an attempt to learn more about how water is freezing to see if we can hack it even further. While I personally don't expect it to lead to changes in how I make ice at home, it's fun to do the experiments and the great thing about ice is that it's free.