Quinine and Tonic - New Info from Just the Tonic Book 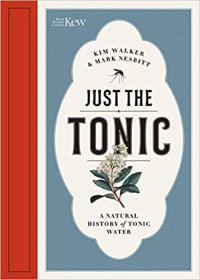 I recently read the book, Just the Tonic: A Natural History of Tonic Water by Kim Walker and Mark Nesbitt. As you know, I also wrote a self-published book about the history of the Gin & Tonic, but mine doesn't have the rich illustrations of this handsome hardbound book - and this book brings forth a lot of new-to-me information about quinine, tonic water, and its use in alcoholic beverages.

As this book was written by actual botanists/herbalists and published by Kew Gardens, they brought to light a few things I missed or on which I was mistaken. It also confirmed many theories I was iffy on.

This blog post is some of my notes from what I highlighted in the book.

There is a lot more from the book I'll take away to use for my purposes (especially on tonic and soda water's early use in cocktails) but these are just a few highlights.

If you're a G&T fan, you should most definitely buy the book!