Two new vermouth lines have me thinking about where the category is going. Typically vermouth is branded as extremely old-world, with monochromatic bottle labels and pictures of obscure plants. It's hard to love, from a marketing perspective.

Small-batch vermouth brands launched over the last decade are often distinguished by their regionality, made with local botanicals as opposed to the same from global brands.  But now I'm seeing signs of vermouth being marketed for the... mass market.

Taking cues from the growing popularity of spritzes (particularly Aperol) and low-ABV refreshing bitter drinks, vermouth is being branded as lighter, fun, maybe even hip.

The big brands were some of the first to make branding-forward vermouths: Martini & Rossi launched an orange vermouth, Fiero, meant for mixing with tonic in 2019 (not in the US). Gallo made vermouth cooler with the launch of Lo-Fi Apertifs, as they released a dry, sweet vermouth, plus a gentian amaro. They seemed to drop them on the market but I haven't seen too much push on them, unfortunately.

Rosé based vermouths already existing in the US include Drapo from Italy (available in the US from Pacific Edge distributors), Pink Vermouth from broVo Spirits,  Yzaguirre Reserva Rose Vermouth, and Istine Vermouth Di Radda. Lustao sherry makes one but I'm not sure if it's in the US.

Speaking of sherry, there is also cider-based, sake-based, and sherry-based vermouth on the market now. So we have a variety of vermouths, but most have not been all that friendly.

Onto the new brands that just launched:

Regal Rogue, with the tagline "The World's Quaffing Vermouth" is described as "an Australian vermouth made with 100% Australian wine and married with native Australian aromatics. With 30% less sugar than traditional European vermouth, Regal Rogue has a semi-dry finish, ideal as a standalone wine aperitif or vermouth led Reverse classic cocktail." 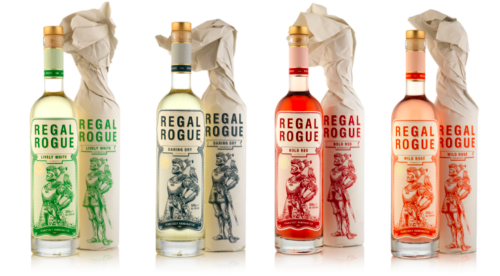 Each of the line has a list of interesting Australian botanicals used in it along with easy 3-ingredient (or less) spritzes with which to use them.  At least from the front of the bottles it doesn't seem to be hitting you over the head with obscure botanicals though; they're inviting.

It was founded by marketer Mark Ward. The press kit states:

In 2005 Mark set up YAKUSAN (www.yakusan.com) a brand marketing agency and launched 42 Below Vodka, Hendricks, Sailor Jerry, Glenfiddich, Chivas and many other brands into the Australasian market.

Through demystifying vermouth, the objective is to turn the category upside down establishing Regal Rogue as the world’s no.1 Aperitif.

The vermouth has been available internationally since at least 2016, is just launching in the US, and was recently acquired by Intrepid Spirits. They describe the brand as, "It’s a brand made for those idyllic, fun-filled, stylish and social moments together, especially those in the summer months: an afternoon by the pool, that cool house party, a long lunch on the beach, early evening drinks as the sun goes down or a barbecue with friends."

The branding on these is interesting -modern wine-like, reminding me of inexpensive critter wines, indicating easy-drinking enjoyability over heritage, terroir, or seriousness. Take it to a party, take it to the beach, whatever!

The other new line of vermouth is Hotel Starlino. But it's not a vermouth line at all! 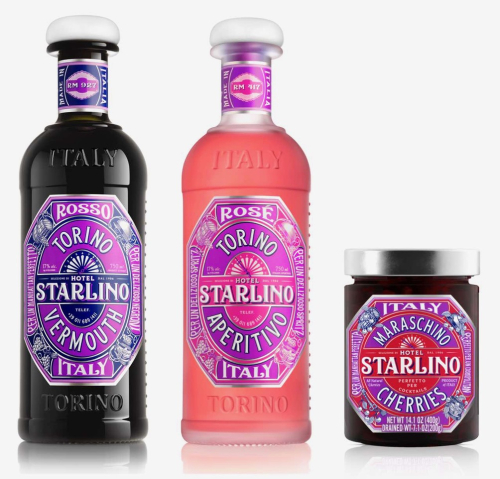 The brand comes from Elwyn Gladstone, founder of Biggar & Leith based in New Jersey, who launched Malfy Gin and sold it to Pernod Ricard last year. Previous to Biggar & Leith, Gladstone was with Proximo Spirits that created or purchased The Kraken spiced rum, Boodles Gin, The Sexton Irish Whiskey, Hangar 1 Vodka, and Stranahan's whisky. All of these brands are now very consumer-facing (as opposed to on-premise brands), driven in part by advertising and design-forward bottles.

I just noticed that the line isn't a red and rosé vermouth but a red vermouth, a pink aperitivo (pink Aperol?), and maraschino cherries. From the press release:

STARLINO Rosé is a delightful and refreshing Aperitivo - made by blending Rosé wine, spirit, pink grapefruit peel, orange peel and 8 other botanicals including Wormwood and Coriander.

STARLINO Rosso (Red Vermouth) – a classic “Vermouth di Torino” – made from a blend of Italian white wine, Sicilian Ansonica and Cataratto wines and Marsala Wine. This is then blended with a careful selection of botanicals including Wormwood, bitter orange and cloves. The Red Vermouth is then aged in Bourbon Barrels for six months to give a rich, spicy, vanilla flavour – perfect for Negronis, Manhattans, on the rocks or with a splash of soda.

At 17% alcohol, both drinks in the Hotel STARLINO range capitalize on the trend for lower alcohol cocktails.

STARLINO Maraschino Cherries are made from high-quality, Italian Marasaca Cherries, also known as some of the highest quality cocktail cherries in the world. Marasaca Cherries are a type of sour Morello cherry made from Royal Ann, Rainier or Gold Varieties Cherries. The de-stoned, plump, ruby red cherries produce a small “pop” after every bite, with a distinct sweet cherry flavour experience.

The Hotel STARLINO Aperitivos and Vermouth are packaged in beautiful, heavy apothecary-style bottles. They are finished with ceramic and wooden stoppers, reminiscent of an antique door knob. The premium packaging features an elevator floor indicator, skeleton key, and bellman’s cap, inspired by the great luxury hotels of Italy. The front label resembles a vintage luggage label and the back label an elegant old-fashioned “Do Not Disturb” door hanger. Besides, as Ronco said, “We have so many friends and visitors to our distillery we sometimes refer to it as a Hotel!”

The bottle design reminds me of jam jars. In any case, it's a bright portfolio of old world products with a friendly branding profile. No need to fear, let's give these quirky things a try!

I'm interested in the pop-ification of vermouth, how it's borrowing from both the spritz trend (slightly bitter, meant to be mixed with fizzy soda/tonic/sparkling wine) and gin of 15 years ago (becoming friendlier in its branding with new bottle shapes, colors, and labels). I think we may be in the beginning of a new era for vermouth... but perhaps I'm just optimistic.