What a difference a few percent can make. Belvedere Vodka has released a new product called Heritage 176 that's not technically a vodka but it's this close.

Labelled as "spirit drink" and described as a "vodka mixed with malted rye spirit," Heritage 176 is is a 100% rye product but it's rye distilled up to 96% ABV that is the legal minimum for the category of vodka, blended with almost-vodka that is distilled from malted rye up to 92% making it a "malted rye spirit." 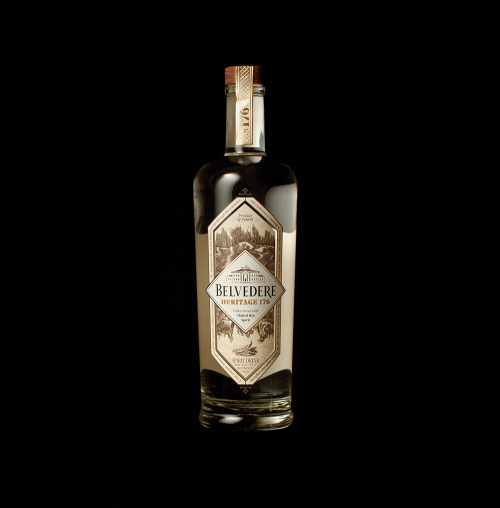 Malting is the process used for single-malt scotch whisky, as well as in other whiskies as the malt component, in which barley is allowed to partially germinate by wetting it, then it is dried out. This process releases enzymes that convert the grain's starches to sugars during the next phase of the process of fermentation when hot water is added to the malted grain.

In other whiskies like bourbon, and for other spirits distilled from grain, a little bit of barley malt is added to the mashbill so that its enzymes also convert the other grains' starches into sugars.

The modern version of this is just adding enzymes to grains directly to convert the starches. This is how  regular Belvedere is made - enzymes added to rye before fermentation without malted grain. I learned this on my trip to Belvedere a few years ago.

So: the malted rye spirit in this new product is malted the old fashioned way. It's kilned (dried out after germinating) at 176 degrees, thus the name. (The way marketers choose a random number from somewhere in the production process just to have something to put in the brand name... sigh). They didn't mention whether that's Fahrenheit or Celsius so we'll assume celsius, which is a relatively dark malt.

But the exciting part is that this malted rye part of the blend is distilled only up to 92% ABV to retain more of its flavor. From the PR folks:

We use a double distillation process for Heritage 176 that takes place in 2 small column stills in a dedicated Heritage 176 section of the Belvedere Distillery. Each stage takes around sixteen hours. In the first distillation we cut the heart of the spirit at an ABV of 88%. To ensure we are always using the best of the best, we take this heart cut from this first distillation and distill again, this time taking the heart and raising the ABV to around 92%, therefore capturing a spirit full of character, flavor and complexity.

Belvedere Pure is distilled up to 96% ABV as per global vodka regulations.

Okay, so then you may ask, how much of this 92% spirit is in the final blend? I asked but didn't expect them to tell me. Boy do I love the new transparency in spirits.

The blend is 98% Belvedere Vodka and 2% Malted Rye Spirit. We experimented with many expressions of malted rye, anything less than the 2% malt didn’t give us the flavor, personality and wow factor we were looking for. Everything above from 3% upwards brought in flavor notes which were overpowering, unbalanced, or just decreased the experience of the liquid.

That's such a small amount! 2 percent of the blend is 92% spirit.

So let's talk about flavor impact: To reduce the categorization of a product to a nonsense description of "spirit drink" is kind of a big deal, even if you're Belvedere. It's kind of a big risk for failure I would think, but on the other hand the big vodka brands all seem to be striving for innovative products to stay interesting lately.

So how much of a departure is this vodka from the original Belvedere? After reading the initial description (before I knew about the 2% part) I thought, "Is this the genever of vodka?" as most genever blends neutral spirit with maltwine. Genever tastes pretty grainy, and is closer to unaged whiskey than gin with a neutral spirit base.

Reader, Heritage 176 is not the genever of vodka. I'd call it amplified vodka.

[I was going to call it Vodka++ in a reference to the programming language C++ and I realized that nobody would get that reference and also I would  have dated myself as an extremely old nerd.]

Tasting notes: Neat and at room temperature, on the nose and initial entry it opens far more bready (a baked loaf) than I remember Belvedere original being (I might mistake it for a wheat vodka), and I thought I would be drinking a grainy vodka like the American craft distillers are making (not in a good way), but then this wham of a black pepper and tanin-like texture comes in at mid-palate and lasts through the finish, almost like a black pepper infused vodka.

To me it was immediately apparent that it was destined to be a sipping vodka, or a Vodka Martini vodka- enjoyed chilled neat to enhance that pepper and body. The website lists as the two recommended cocktails as just on the rocks or in a Vodka Old Fashioned with honey and walnut bitters, which sounds great.

But then I thought, Why not fuck around and find out if it's good in a Vodka Soda. 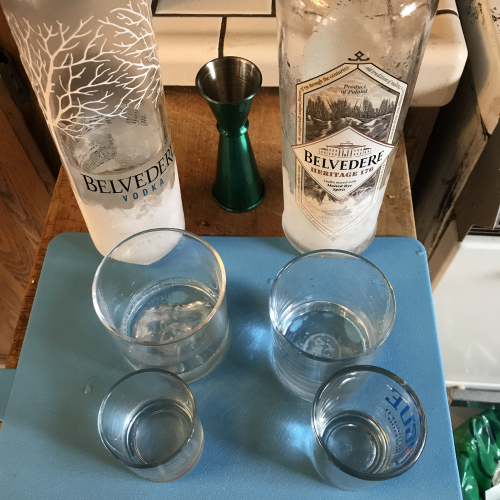 So I made one as I was typing up this blog post, and now I'm on my second one because DAMN THAT'S A STELLAR VODKA SODA. It's the Japanese Whisky Highball of Vodka Soda. It is probably the best vodka soda I have ever had. What.Is.Happening

Okay, so a Vodka Soda is trash but: Have you ever had one with Grey Goose VX? It's fantastic; that soft cognac note is lovely. Tito's makes a great VodSod too due to that lingering corn sweetness.

But for the Belvedere Heritage 176 all the flavor of the grain I'd missed in my tasting note above come out here: the real essence of malted rye - not that dill pickle relish note of rye whisky (I know this isn't a common tasting note but rye whiskey tastes like dill pickle relish to me), but a sweet cedar note (that registers as "hamster shavings" to me) that lingers on and on in the finish of the Vodka Soda. Then there is this lingering oily texture that mingles with the black pepper notes. Oily cedar Vodka Soda? Turns out that is amazing.