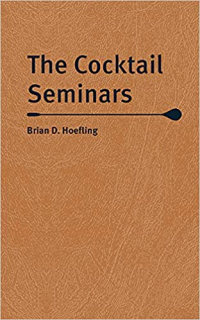 Brian Hoefling's third book, The Cocktail Seminars [amazon][bookshop], is based on cocktail classes he began teaching in college. Today he runs the Herzog Cocktail School in Boston and is the author of two other books: Classic Cocktails, and Distilled Knowledge: The Science Behind Drinking's Greatest Myths, Legends, and Unanswered Questions.

He asked me to consider writing a blurb for it to accompany the release, but then I didn't get time due to finishing my own book, so I wrote this too-long-as-usual book review instead. Then, thanks to the global shipping slowdown, the book's release was delayed twice. Anyway, it comes out June 22, 2021.

The book is organized from more-or-less simple to complex cocktails in five "seminars" of 30 cocktails each, rather than alphabetically, by spirit, by history, etc. as in most books. The drinks are also organized by ingredients and techniques such as those in classic cocktails, those containing ingredients that survived the Cocktail Dark Ages, and those with new or recreated ingredients in the cocktail renaissance like Creme de Violette or orange bitters. The last two chapters feature tiki drinks and modern mixology.

Each cocktail recipe gets two pages of explanation along with a chart (more on that in a second) of its characteristics. The text in the explanations ranges from the history of the particular cocktail or the ingredients within it, how the flavor comes together/why it works, the technique used to make it (swizzling, etc), how it relates to or builds on other cocktails, etc. There's something different in each description rather than them being all of the same format.

With 150 drinks, that's 300 pages of mostly text (the book is about 370 pages long). It must be one of the wordiest recipe-forward cocktail books out there. I like words.

The first cocktail in the book is the Mint Julep and the entry and includes information on the drink's history and the role of mint as an aromatic garnish that contributes to the flavor of the drink without actually being included in the liquid. The final cocktail of the book is the Trinidad Sour, with its full ounce of bitters. That entry describes how high proof rye whiskey in the drink is actually the "smoothing and harmonizing" agent in the drink; the bitters acting as the base spirit battling it out with fatty orgeat syrup. He then tries to correct the record about all sours using egg whites historically so this drink's name is proper. 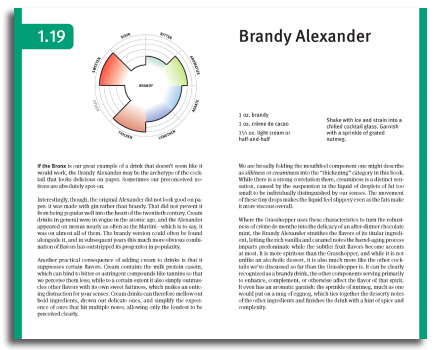 So there is a mini-lesson with each drink. Now, if you're an experienced cocktail nerd, you will know a lot of the information about the ingredients and most of the drinks already, but what I found especially interesting is not the rules and regulations of cocktails but Hoefling's observations about them. He goes beyond facts into showing his thought process, rather than just stating conclusions. I love it when we can see the gears of the machine. A few observations I pulled out from the book:

The information is somewhat scattered so you don't get a whole course on rye whiskey altogether, for example, and there are always touchpoints to earlier drinks and drinks/ingredients/techniques/history. Sometimes you get a wallop of facts where you least expect it. For example, nearly halfway through the book in the entry for the Army & Navy, we get this section of a paragraph on gin:

The shape of its flavor is irregular, undulant, even changeable from brand to brand. It contributes juniper, but even juniper has some variety to it, containing as it does not only the pinene and myrcene that are typical to evergreen scents, but also the woodier sabinene and cadinene. Likewise, every gin further backs up its juniper with other spices, commonly including lemon and orange peel, cinnamon or its close cousin cassia, nutmeg (which evokes all of the foregoing as well as camphor), earthy angelica root, piney-floral cardamom, and any number of herbs, spices, adn flowers the distiller cares to blend together. Gin, in a sense, is like Chartreuse on a lighter plan.

However, my favorite thing about the book is that Hoefling attempts to pose sort of a taxonomical system on cocktails, or at least a system of description. In the introduction, he writes,

Many writers have, for example, theorized that all cocktails can be thought of as variations on some number of essential templates. If that appeals to you, I recommend The Cocktail Codex, Regarding Cocktails, The Joy of Mixology, or The Fine Art of Mixing Drinks... I happen not to agree with that framing.

Hoefling's system, which I suppose is more of a system of description of each cocktail rather than an organizational taxonomy, is that each cocktail consists of a base (spirit, usually) that is augmented: the base is sweetened, soured, aromatized, bittered, lengthened, aerated, thickened, or subjected to a few miscellaneous alterations such as salting and making savory. These alterations are given levels or amplitudes, as you can see on the illustrations on this post. A classic Daiquiri is a rum-based drink that is slightly aromatized and aerated, lengthened and sweetened a bit, and more than the other augmentations, made sour.

This system makes strange cocktail bedfellows. A Stinger (brandy, creme de menthe) is similar to a Mint Julep (bourbon, sugar, water, mint) in that both are base spirits that are chilled, diluted, sweetened, and aromatized with mint.

The chart for the French 75 (gin, simple, lemon, champagne, lemon twist)  and the Gin Fizz (gin, lemon, sugar, soda, no garnish) are identical except the French 75 is one level up in sweetness.

The system is also used to separate cocktails that look similar: A Rob Roy is not merely a Scotch Manhattan because the aromatic addition of the orange peel is a fundamental change.

Some cocktails slip through the cracks. If you think about the base spirit as the backbone of the drink, then sometimes the base spirit is not a spirit at all. For example, in the book the Screwdriver is an orange juice-based drink that is modified (dried out) by vodka. An Americano's base is sweet vermouth, that is bittered with Campari, despite them having equal quantities in the drink and the Campari dominating the flavor. You may or may not agree! Other drinks seem to slip through the cracks more dramatically.

That is fine, and no reason to throw out the baby with the bathwater. No taxonomical system that I've seen works for every cocktail - the Negroni is one of the classic cocktails that pretty much fails every grouping that you try to cram it into, for example. Most people end up making it its own category.

Perhaps this way of looking at drinks is more like describing cocktails that already exist via base spirits modified in a range of ways to different degrees, versus a classification system that describes a format with interchangeable ingredients. Thus, (without looking it up) a Daiquiri and a Fresh Gimlet in Hoefling's system are always two separate drinks described similarly, while in the taxonomic system a Fresh Gimlet *is* a Daiquiri with gin, full stop.

I haven't decided what I think about this system quite yet, but fair to say I really enjoy that there is one. I think a lot about cocktail taxonomy (like, a lot a lot) and nomenclature, but can't say that I've come up with anything too unique myself, no unified field theory of cocktails yet. I SAID YET. But I love seeing how other people classify, categorize, and describe drinks. As anyone who studies drinks for a little bit knows, cocktails are not just independent recipes that happen to all taste good, but drinks that relate to each other in format, ingredients, and/or flavor.

This is a cocktail book that gives me a lot to think about, and for me that's the best kind.

Purchase The Cocktail Seminars on [amazon] or [bookshop].