With Anchor Brewing Sold, Where Do They Make Junipero Gin & Old Potrero Whiskey?

When the Anchor Brewing Company and its beer was sold to Sapporo a few years ago, Anchor Distilling, crammed into a corner of the Potrero Hill brewery for about 25 years, needed a new home.

A couple of weeks ago marked its official move-in to Pier 50, between Oracle Park and the Chase Center, which had been the distillery for 209 Gin since it was launched in 2005. 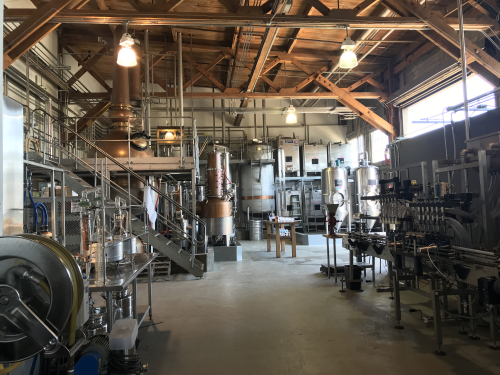 The former Anchor Distilling Company is now Hotaling & Co., named for the whiskey storehouse that survived the 1906 earthquake and fire and was immortalized in the line, "If, as they say, God spanked the town for being over-frisky, why did He burn His churches down and spare Hotaling's whiskey?"

Old Potrero Whiskey was the first distilled product launched by legendary former Anchor Brewing owner Fritz Maytag. It was/is a malted rye whiskey aged in toasted and charred, custom-bade barrels. More on it in a second.

The new(ish) Hotaling & Co is also the importer of Luxardo products, Nikka Japanese whiskies, Kavalan Taiwanese whisky, Chinaco tequila, Christian Drouin brandy, and more.  That part of the business is located near the Transamerica Pyramid (and the original Hotaling building), but you can't exactly distill in an office building. 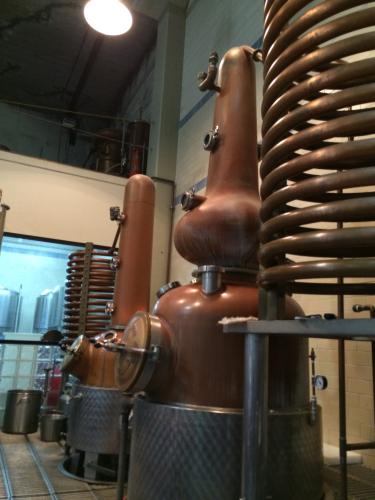 209 Gin was located on Pier 50, so it's technically a distillery over water. I first visited the site in 2007, to report this piece for the San Francisco Chronicle on a bitters-making activity that the brand hosted. 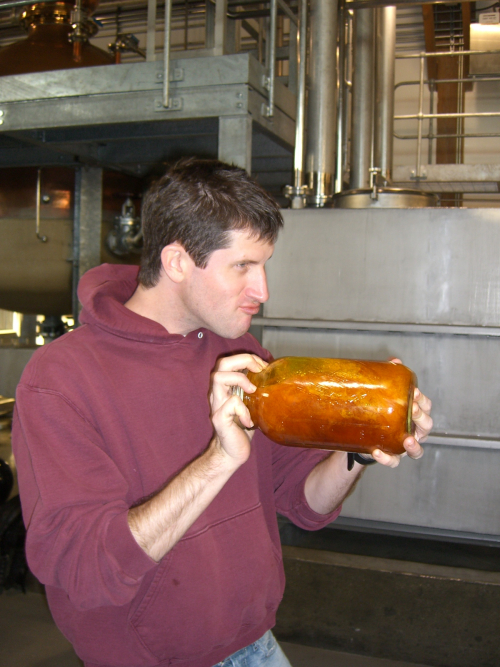 Johnny Raglin shaking bitters at the 209 Gin distillery in 2007

The 209 Gin brand was purchased by Vintage Wine Estates in 2018. It wasn't a big transition, as VWE's head was Leslie Rudd, founder of 209.

But now Junipero Gin will be made and bottled at the Pier 50 site, on the small equipment relocated from Anchor, in the shadow of the 1000-gallon still for 209 Gin that is now the property of Hotaling.

209 Gin will likely still be contract-distilled in the same still on the pier going forward- and be made by its former distiller Arne Hillesland, as he is now in the employ of Hotaling & Co. Hillesland is the Head Distiller at Hotaling, while Bruce Joseph is the Master Distiller. Joseph worked with Maytag to launch the Old Potrero whiskies, Junipero Gin, and a now-discontinued genever that I covered in 2007. 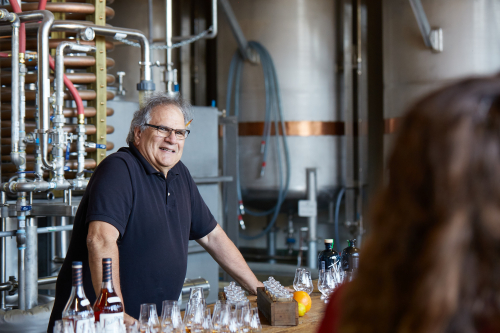 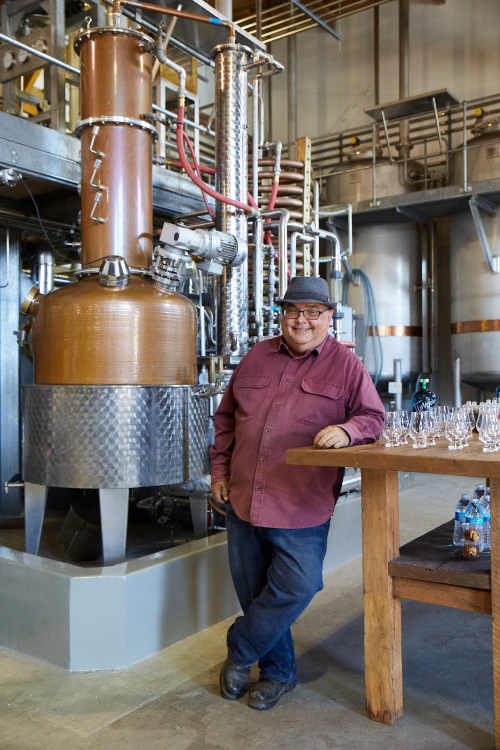 The tiny stills from Anchor's Potrero Hill brewery will still make Junipero Gin, at least for now. They sit in the shadow of the massive 209 Gin still, and I would imagine they'll find some use for the piece of equipment. In addition to their stills, Hotaling brought over their liquor bottling line from the Potrero brewery, and had just assembled it before their christening a few weeks ago. 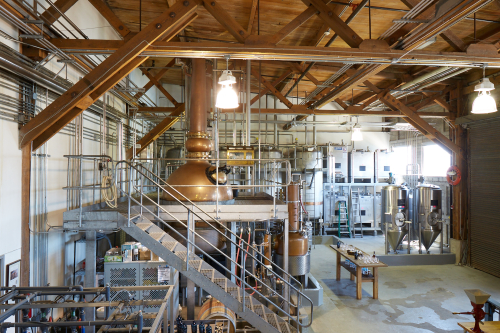 Image courtesy of Hotaling & Co. The 209 still is on the left; the Junipero still is the small one in the middle. 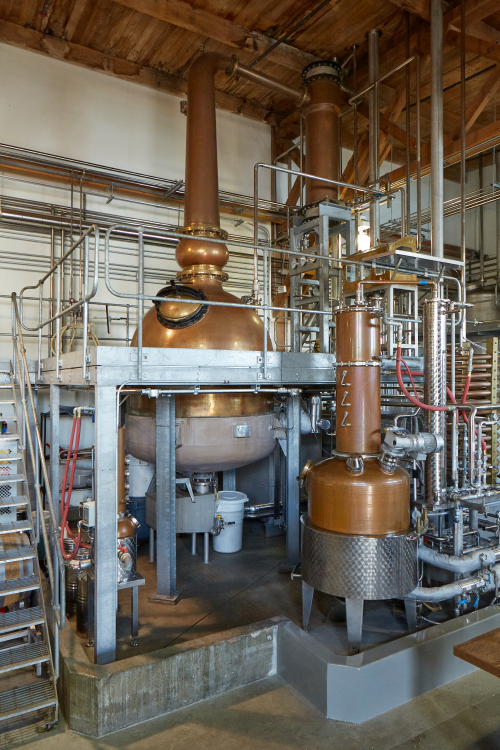 Old Potrero whiskey will not be made on the Pier, but in Sonoma (as it has been for a few years) due to logistics with fermenting and waste disposal on-site. (I think at Sonoma Distilling Co but I didn't confirm that.) If I understood correctly, they have plenty in barrel that allowed the company to not have to produce a lot of whiskey right now. But also because Old Potrero is increasing to a six-year age statement.

To celebrate that, and to match the far-fancier bottles of Junipero Gin and their Hirsch Bourbon (that is sourced from MGP), they'll be releasing the whiskey in a new bottle, though I'm not sure how soon it will be on store shelves. 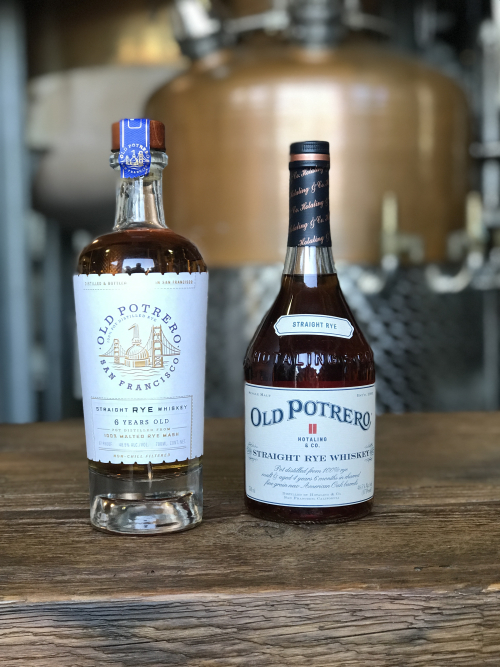 Future plans for the Pier 50 distillery space might include a tasting room of some sort open to the public, though that won't happen soon as the move is still fresh.

I had the chance to visit Bruce and the team at the Potrero brewery/distillery twice when I was just starting in the distilling industry. He was very generous with his time and knowledge, and the old facility was cool in its tucked away in the bowels of the brewery kind of way. Nice to see them getting out into a new facility.

I'm heartbroken (and more than a little angry) that Sapporo discontinued Genevieve gin. There's nothing like it in the Improved Gin Cocktail. I learned it from Erik Ellestad's blog almost ten years ago and it has been in my wife's and my Top 3 ever since. Bols is ok, but is lacking. Do you know of anything closer in profile?

I'm also not thrilled with what Sapporo did to the Junipero bottle. It used to look classy. Now I don't know who they're trying to appeal to. It looks childish.

Camper, you were right, it WAS worth clicking on the link just to see the vintage Raglin shot.

Steve Nicholson, have you tried an authentic Genever, like Diep 9, as a replacement for Genevieve?

Sadly, diep 9 has gone out of business and is no longer being made. Please correct me if something has changed in the last couple years.

Aside from the Bols, I had a bottle of Boomsma Oude but it didn't make much of an impression on me. Too bad about Diep 9 getting discontinued before I even heard about it! I guess genever gins haven't gotten popular enough to keep them in production. This reminds me of 35 years ago when it was hard to find a bottle of rye. I don't think I have another 35 years in me to wait for genever to work its way into the zeitgeist. Camper, you need to talk it up around town! 😛

Hmm? Is there not a woman distiller who has been there for years? Kelly ? No photo... as a "fellow" female; I am not surprised that they (men) did not include her image. Small penises and big egos. YUCK!