The Freezer Shelf That Ruined My Ice

Last year I finally convinced my landlord to buy me a new refrigerator because my previous one sounded like a truck. She gave me a few options from which to choose and unsurprisingly I based my decision 100% on the freezer capacity. My freezer arrived. I was unused to such grandeur.

But hidden within its frosty interior was a terrible secret: The freezer was large enough that it had a shelf. My previous one did not. 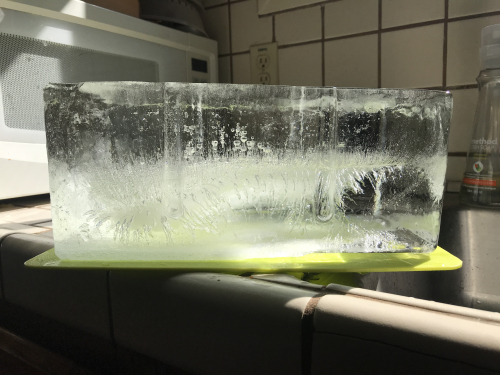 As you know, I make a lot of ice in the freezer, inside a cooler. The ice comes out great. But in my previous freezer, there was no shelf and the freezer sat on the plastic bottom. It turns out, this matters.

While the cooler is insulated on all sides except the top, when sitting on the shelf cold air is flowing around all sides as well. Though the cooler is insulated, it's not perfectly insulated. (I also think that the warmest setting on this freezer, where I keep it to encourage slow freezing, is a lot colder than on my previous one.) And when I make ice in it, it turns out that it freezes more from the bottom up towards the top than it does when the cooler sits on the bottom of the freezer.

It makes sense, but what it means practically is that the cloudy part of the ice is closer to the middle of the frozen block, and if you let the block freeze all the way and cut off the bottom, you get less clear ice than when sitting the cooler on the bottom of the freezer.

However, if you only let the cooler freeze for a couple days, ice forms on the top and bottom but the middle is still perfectly clear; you can harvest clear ice from both the top and bottom of the block after you dump out the liquid middle.

But I wanted to see if I could alter the situation. So I put a hand towel beneath the cooler atop the shelf for a small bit of insulation. It did seem to help, but not as much as I'd like. 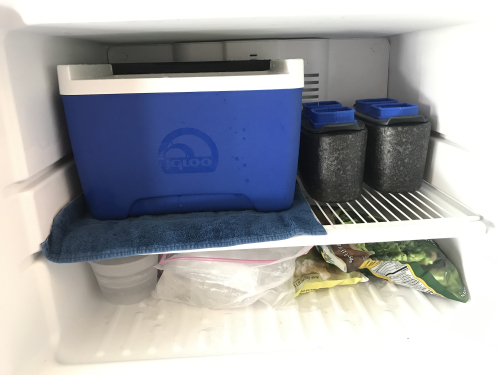 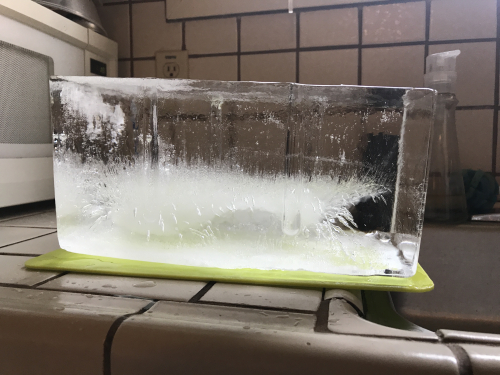 My first thought was to add more insulation to the shelf, but then I found I could just barely get the cooler into the freezer and sit the shelf atop it afterward. 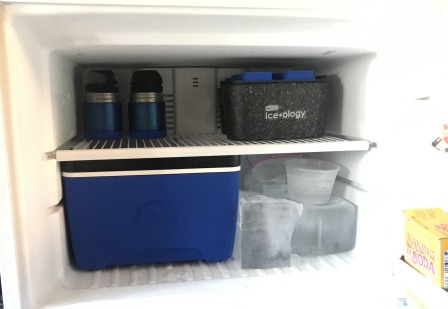 By setting it on the bottom of the freezer, here is how the block came out: 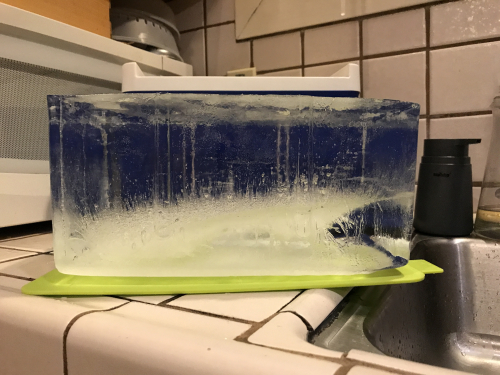 I think it's quite a bit better, though I wish I had measured the distance from the bottom of the cooler to the cloudy part to quantify by how much.

In any case, going forward I may have to research insulating the bottom of the cooler better (and leaving it sit on the shelf) because to store the cooler beneath the shelf means I have to take everything off the shelf and pull it out; kind of a pain.

UPDATE Sept 28th: I put an insulated mailer beneath (something like this) the cooler and it seemed to improve the situation. 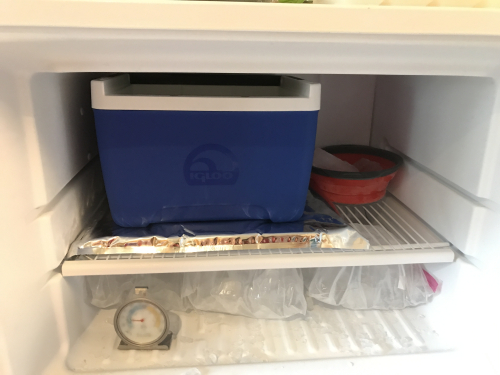 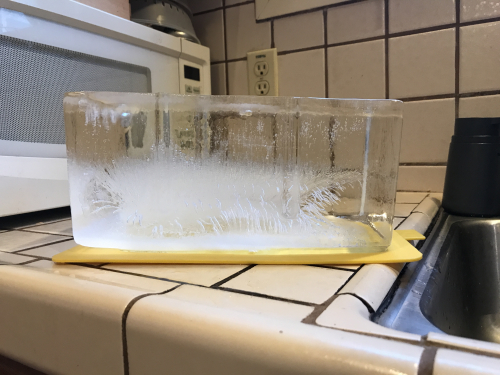 To me it looks like the cloudy part is a bit closer to the bottom of the block (plus it's a bit clearer in general), though as usual it's hard to tell from the picture.

I also measured the amount of water I put in the cooler this time so that I can compare should I do more experiments.