Review of Drunk by Edward Slingerland

I reviewed the book Drunk: How We Sipped, Danced, and Stumbled Our Way to Civilization by Edward Slingerland.

This article first appeared on AlcoholProfessor.com.

Book Review: Drunk: How We Sipped, Danced, and Stumbled Our Way to Civilization By Edward Slingerland 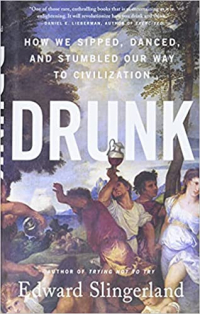 Many thousands of years ago, alcohol was a lot more directly useful to humans: Fermented grapes and grain could be safer than water to drink, beer and wine contain a more concentrated source of calories and micronutrients than their raw forms, and fermentation also preserves and extends the life of some raw ingredients. But in the centuries since then, humans have developed technology and knowledge to solve the issues of sanitation, nutrition, and preservation without alcohol. Evolutionarily speaking, it seems that consuming booze has only downsides – liver disease and cancers, drunk driving accidents, and alcohol dependency that shortens rather than extends human life. So why do we humans still like to drink?

University of British Colombia Professor Edward Slingerland’s new book, Drunk: How We Sipped, Danced, and Stumbled Our Way to Civilization first explores existing theories. Our love for alcohol could be a genetic accident, and/or it may have been useful to our primate ancestors at one time, but we just haven’t evolved to avoid it as fast as we adapted to liking its buzzy impacts. Slingerland casts doubt on these theories and sets the stage for the rest of the book.

Unlike chimpanzees and other creatures, humans adapted to a unique “ecological niche” so that we don’t need sharp claws or flesh-ripping teeth to collect food, and our digestive systems are optimized for that food to be cooked rather than exclusively eaten raw. Our ability to thrive is not due to rugged individualism but connected to culture: our ability to trust each other, cooperate, find creative solutions, and build on the cumulative knowledge of previous generations and other people. And to help build crucial, constructive cultural bonds with other people, we go out for drinks.

So goes the central argument of the book. In order to survive and thrive, humans need to be creative as well as cooperative. Alcohol comes to the rescue primarily through suppressing the functions of the prefrontal cortex (PFC), the part of the brain that is the “center of cognitive control and goal-directed behavior” that takes over twenty years to fully develop. While most of the time the PFC is the key to humanity’s success, taking it offline to enhance one’s mood for a few hours on occasion is extremely useful: It assists us in making creative free associations (“write drunk, edit sober”), and particularly in building bonds and trust with others at work and in society (“I love you, man!”) in order to foster cooperation.

This, he argues, is true not only of after-work happy hours, neighborhood barbecue parties, and diplomatic dinners but also of other drugs and situations. Other intoxicants used around the world, including peyote and kava, and intense rituals like Sufi whirling dancing, ecstatic singing as is practiced in some religions, and even the “runner’s high” that marathoners experience can bring us into similar headspace. But Slingerland asserts that we prefer alcohol above the other options because drinking a glass of wine is a lot quicker than dancing for hours, you don’t need to commit to a 12-hour mind-bending out-of-body experience, and it is relatively easy to control the dosage.

Drunk then sets out to prove this overriding theory, citing a huge amount of research across fields including history, anthropology, biology, medicine, and more (the endnotes and the bibliography take up a bit over 50 pages) to show that alcohol is “the chemical tool that allowed humans to escape the limits imposed by our ape nature and create social insect-like levels of cooperation.”

Of course, alcohol is not a perfect performance-enhancing drug. The final of five chapters examines the downsides of alcohol. Slingerland asserts that the negative health aspects of alcohol are amplified by the twin curses of the development of high proof spirits and drinking outside of social occasions; aka “distillation and isolation” that “may fundamentally change alcohol’s balance on the razor’s edge between usefulness and harm.” It’s a bit of a bummer for those of us who enjoy a whiskey as a nightcap.

Slingerland also shares a few counterpoints to his earlier arguments in the final chapter. For example, alcohol consumed in the context of drinks with coworkers and business partners can increase group bonding, but these situations are also often hostile to women and non-drinkers, and thus perpetuate existing gender imbalances and exclusionary social hierarchies. The reader might question whether alcohol-centered coworker bonding is the right way forward, no matter its utility in the past. Thank you for your service, let’s meet at the lemonade stand next time.

The author ultimately comes to the defense of continued use of alcohol despite its flaws. On its impact on the human body, Drunk asks us to consider that “alcohol continues to serve important individual and social functions, the value of which must be weighed against the more obvious health risks.”

Overall, the book is a relatively quick read and a thought-provoking one, and perhaps not as dryly written as this review would suggest. There is much room for argument and discussion on the book’s content and conclusions, and I think that’s a great strength of the work. It inspires the reader (or rather, this reader) to convince others to read it too, so that we can come together to debate it- over a few beers, of course.