Drinking The Menu at The Madrigal in San Francisco

I had the opportunity to check out the new bar-focussed restaurant The Madrigal last week. The cocktails come from Mike McCardle, formerly of Shakewell in Oakland. The bar is located on Van Ness right near the opera/symphony to take advantage of pre-show crowds. It's a nice space and you can make reservations just for drinks without doing a whole dinner should you want to. 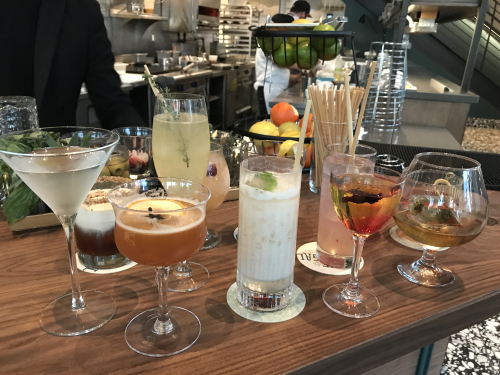 Overall I'd say once you understand what the drink is, such as a variation on a classic, you can figure out exactly how it's going to taste. The visual cues on the menu (illustrations of the cocktail glassware and its garnish) help in knowing the drink's format; something I appreciate in a city with ever-more-obscure drink descriptions. A few of the drinks are a touch on the sweet side but not in a "too sweet" way, just sweeter than usual for the SF cocktail bar palate that tends to go overboard with the citrus and scrapes the enamel off your teeth.

So, here's the rundown. The Screen Test (dark rum, kumquat liquor, basil, coconut milk, thai chili, bitters, lime) is like tom kha gai soup... or just a creamy coconut milk drink so popular on menus around town right now. Those are finger lime pearls atop the drink. McCardle says this one is a top seller, which is not at all surprising. 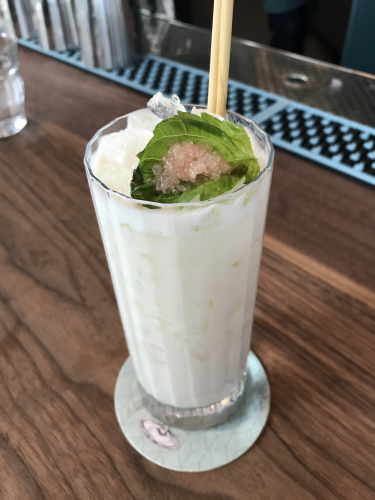 The French Fit (suze, yellow chartreuse, tequila, cocchi americano) is for fans of Suze - so that's me! Over time the hibiscus atop the drink changes its color... if it lasts that long. 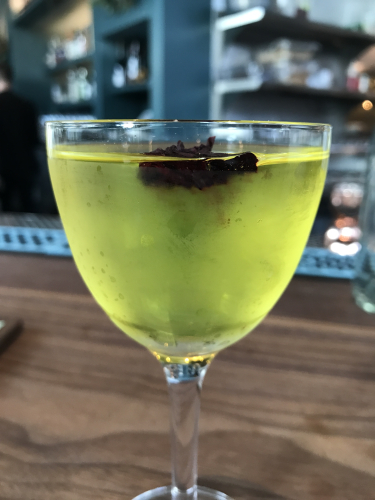 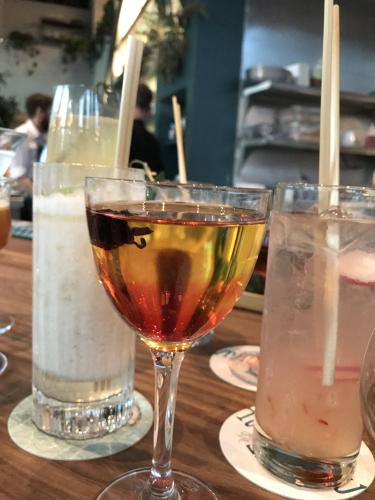 Bubbles for your Troubles (gin, lemon, thyme syrup, cava) also tastes exactly like you think it will. 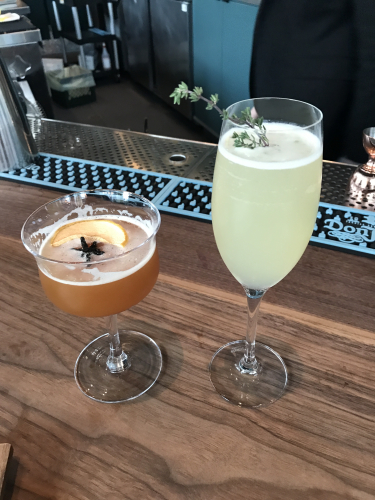 The Dillinger Pour (gin, radish, pink peppercorn, lemon, soda) is supposedly a savory take on the Gin & Tonic with radishes instead of the typical herbs that people might throw in in. This one tasted to me more like a gin sour with peppercorn; so, good but without the expected oomph of the radishes or tonic. 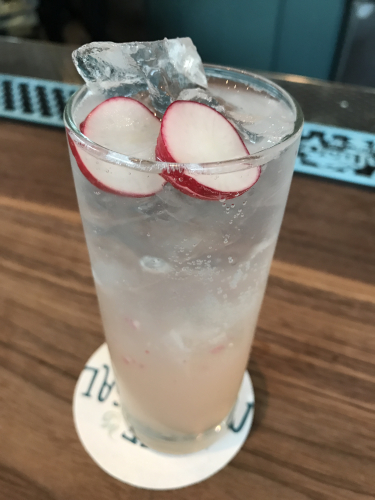 The Gold Blooded (pisco, reposado, date honey, orgeat, lime, peychauds) was a favorite, with a honey-pisco combination I don't recall tasting before but very much enjoyed. 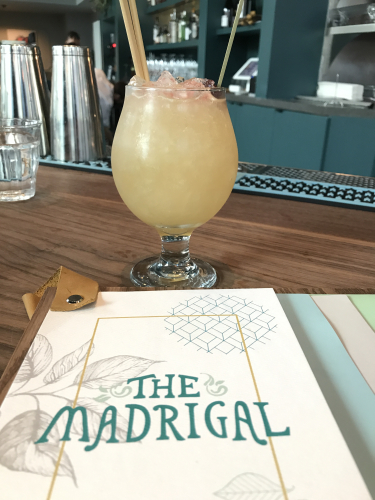 I suppose The Bowie (cynar, aperol, cava, sea salt) addresses the Aperol Spritz but it's so, so much better than one, with the lingering bitterness of the Cynar. This was my favorite drink on the menu. It comes layered and it's up to you to mix it. Also the glass is nice. 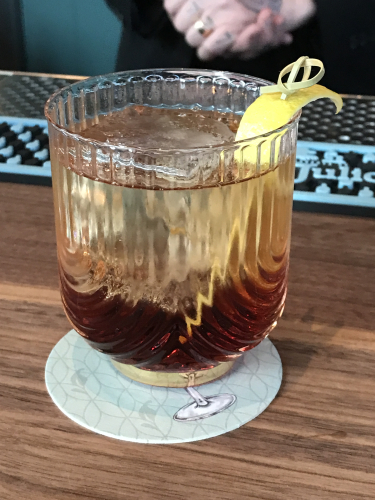 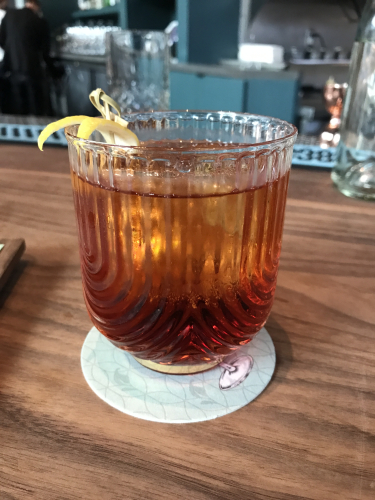 The Bottom Dollar (rye whiskey, sage syrup, tobacco bitters, cherry vanilla bitters, torched sage) is an Old Fashioned. The tobacco bitters are from The Bitter Queens and contain no tobacco, which is good. 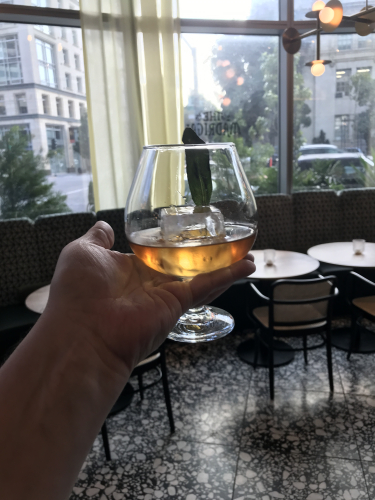 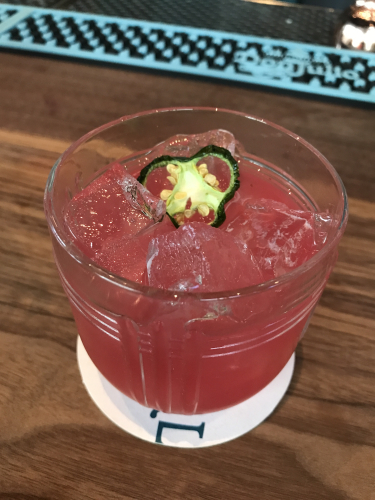 The Usher's Cap (dark rum, noyaux, angostura, lemon zest) is basically a Cherry Manhattan- the Noyaux is almond liqueur that to me tastes like cherries, so if you like Manhattans with lots of cherries consider this one. I failed to take a picture (amateur!) but it is served in a wineglass. I prefer it served over a big rock.

Try Me (vodka, fennel, dolin blanc, absinthe rinse) is the vodka drink - a savory Martini with a super delicious fennel syrup that I want to bring home with me. It's sweeter than a standard Martini that doesn't have any sugar, of course. I also failed at getting an individual picture of this cocktail, but it's the one served in the typical "martini glass" you can see in the group shot.

Finally, the Cold Snaps (vodka, mr. black, espresso, vanilla, chocolate whip, almond dust) is the coffee dessert cocktail you expect it to be. I found the thick salty almond rim on the drink to be a bit much, but it's dessert! 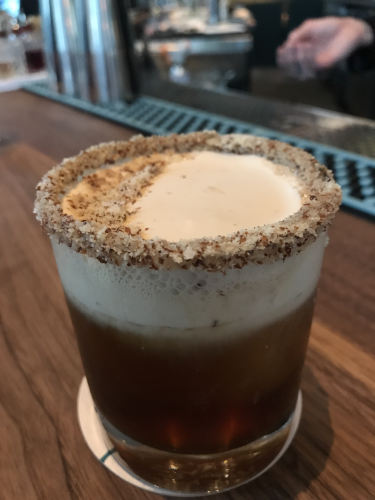 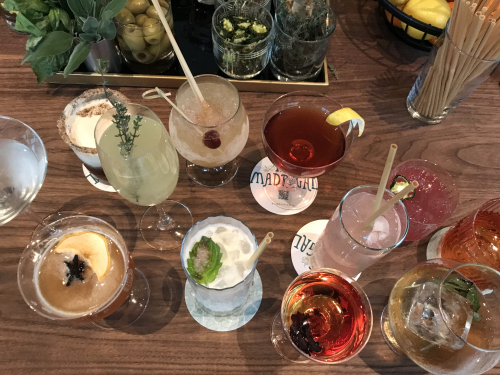 So the menu at The Madrigal is nothing too wild; tasty flavored variations on well-loved cocktail formats. Should be something for everyone there. And I'm very inspired to start drinking Cynar Spritzes from now on.