Alcademics Book Blog Search Twitter Instagram Clear Ice Facebook Cocktail Green Contact
What is Oleo Saccharum and How Do You Use It? on Bevvy
My Entry in the Oxford Companion to Spirits and Cocktails

For the Alcademics Book Club, we're reading Sweetness and Power, about sugar. Every time I read about the history of sugar, particularly the heyday of slavery-powered production in the 1700s in the Caribbean, I'm always like, "What happened to Portugal-controlled Brazilian sugar?" 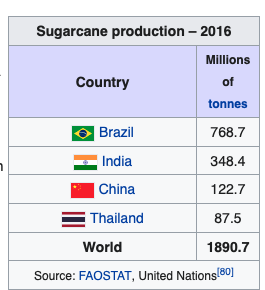 The Portuguese were early leaders in sugarcane production but then fell off the radar; we mostly hear about Caribbean plantations in the 1700s run by the Spanish then the English and French. Sugar was still produced in Brazil but it wasn't a global economic force. But today, most sugar again comes from Brazil. So what gives?

I still don't really know how to sum it up (I'd love it if someone was just like "bad management by a newly-poor country" which may be the case), but I pulled some content from the Wikipedia entries on the histories of Portugal and Brazil.

From the Brazilian Side:

From the Portuguese side:

I don't think that's really the whole story but it gets me closer to what I want to know.

The history of Portugal, France, Spain and England is fascinating, especially when it gets into South America, the Carribean and such. Thanks for sharing this info :)