I had the opportunity to check out Bottle Club Pub, the latest venue from Future Bars (Bourbon & Branch, Rickhouse, Zombie Village, etc) located adjacent to Swig off Union Square.

One of the weird strong points for this bar group is excavation: They turned Bourbon & Branch into a 3-room venue with basement connecting all; Pagan Idol and Rickhouse are connected via a basement in which Ginger's is located. In this case as with Rickhouse, at Bottle Club Pub they took a tiny venue that actually had a lot of unused area in it and opened it up. Where once there was a drop ceiling now their are big windows and a balcony level. 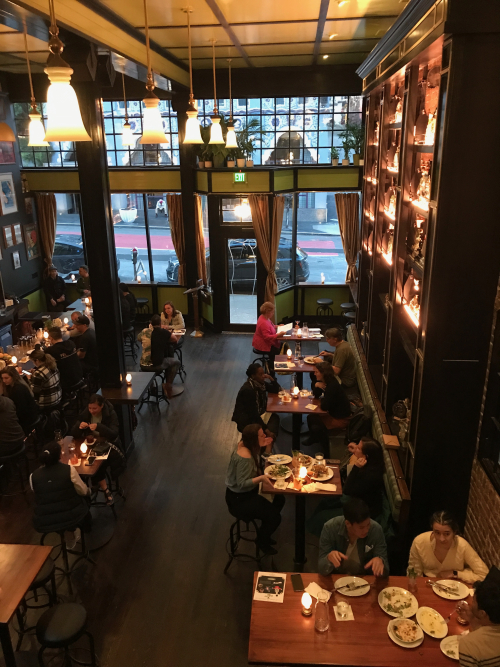 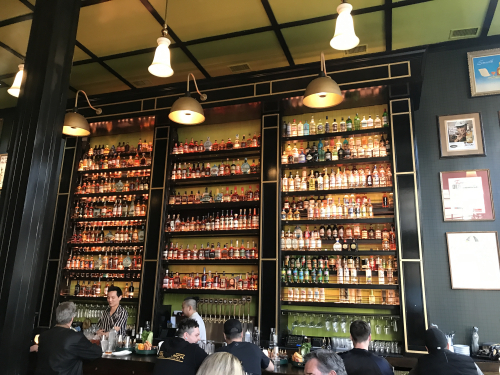 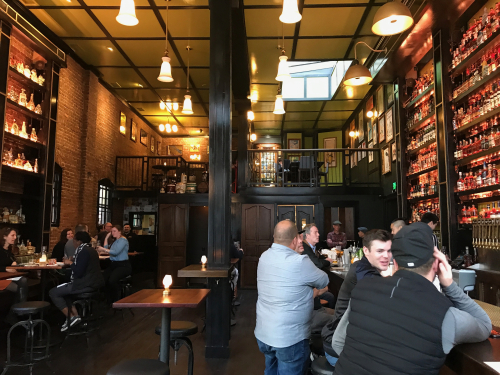 The star attraction here is the moving shelving units, followed by the stuff on the shelves. The back bar has hundreds of bottles that sit on shelves that rotate. It's not just for display - rather than having bartenders climb up ladders to fetch top-shelf bottles, they flip a switch and wait for them to come around instead. All the shelves rotate (and in different directions) and it's quite a sight!

On the wall facing the back bar shelves is another set of rotating shelves, but these move almost imperceptibly slowly to show off their vintage novelty ceramic whiskey bottles. 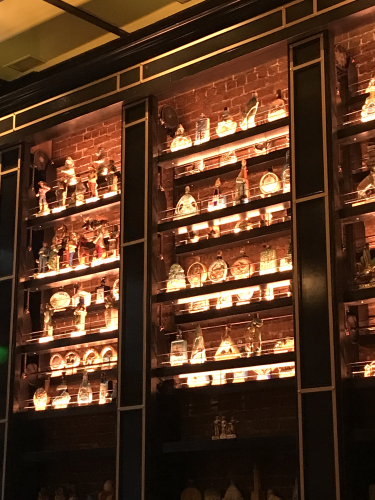 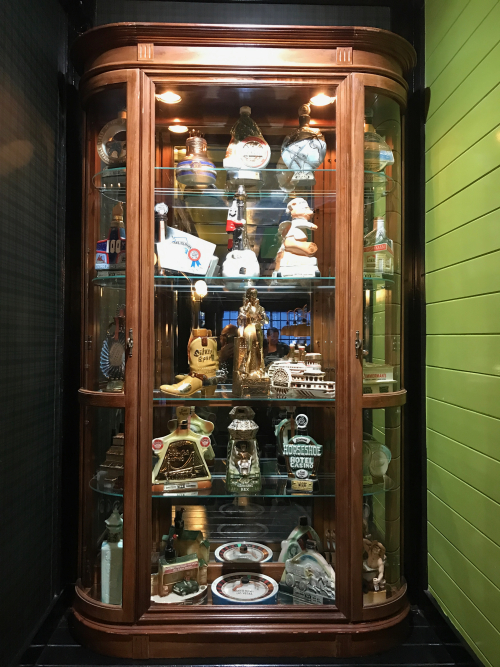 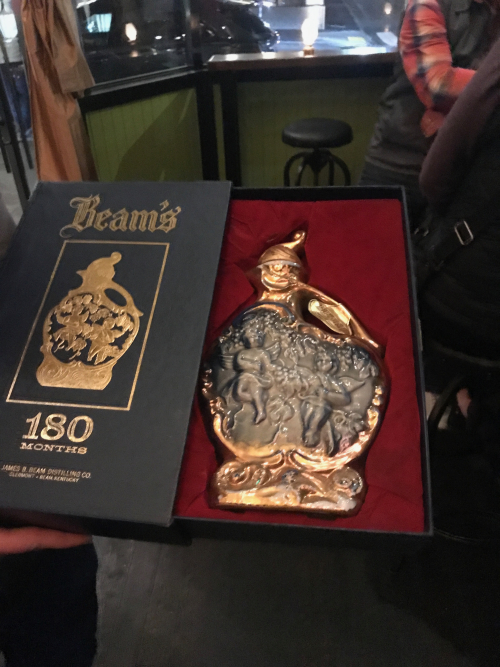 An unusual aspect of this venue for the group is that they're serving food; something they've only done in one East Bay venue previously (and I think only because they had to). I had some eggplant cheese pasta and roasted cheesy potatoes, but you don't read me to hear about food.

I tried a bunch of drinks: 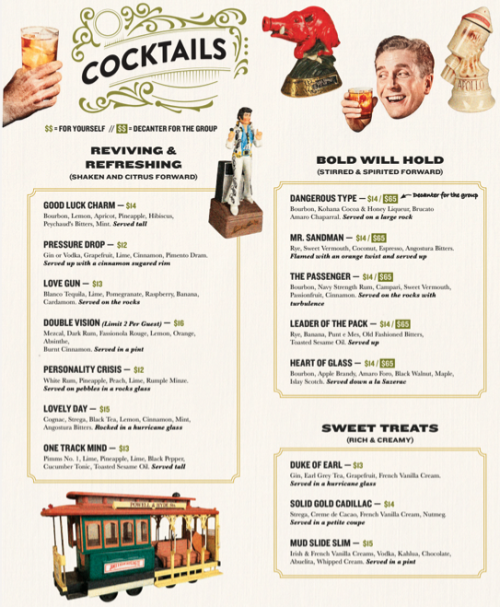 The Solid Gold Cadillac - is a take on the famous Gold Cadillac from Poor Red's in El Dorado, but with Size instead of Galliano. It's a must. 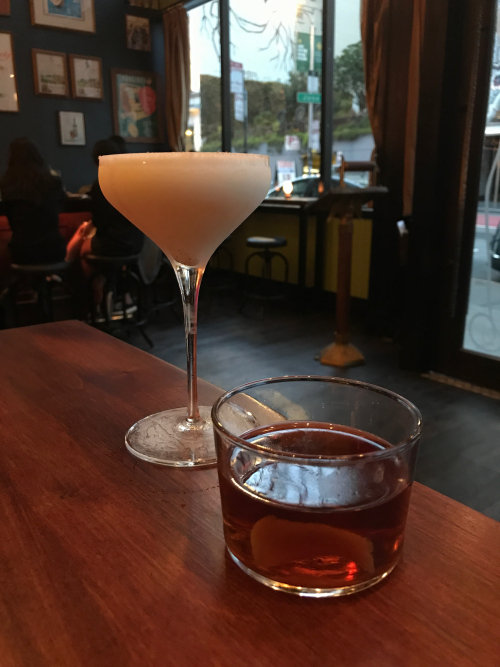 I went in for the Personality Crisis (White Rum, Pineapple, Peach, Lime, Rumple Minze) that tastes like a Bartles & James peach wine cooler with a Rumple Minze float, hell yeah.  No Regerts! 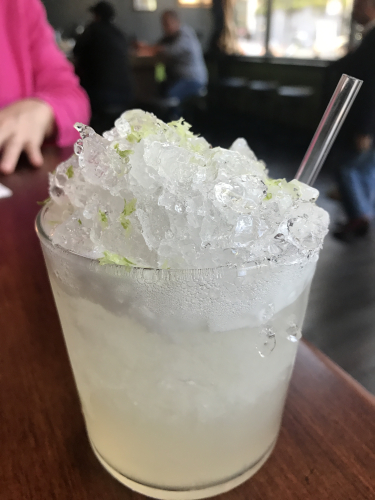 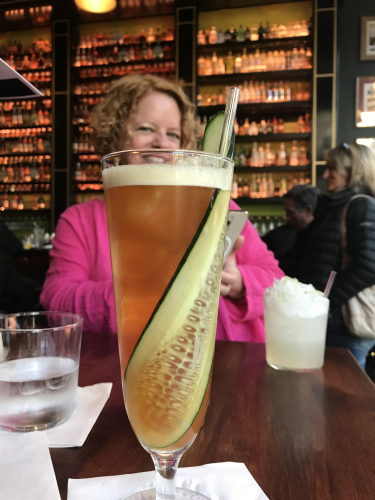 The Passenger (Bourbon, Navy Strength Rum, Campari, Sweet Vermouth, Passionfruit, Cinnamon) is sort of like a tropical Boulevardier. One of the best on the menu IMO. 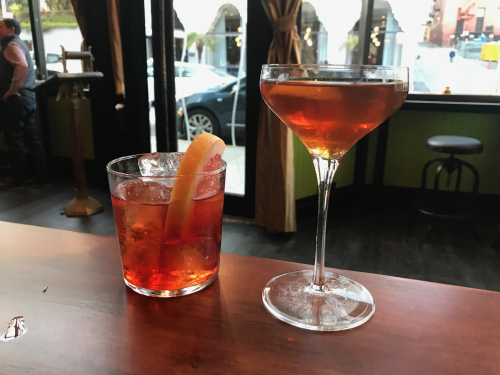 Duke of Earl (Gin, Earl Grey Tea, Grapefruit, French Vanilla Cream) is more like an orange creamsicle than not! 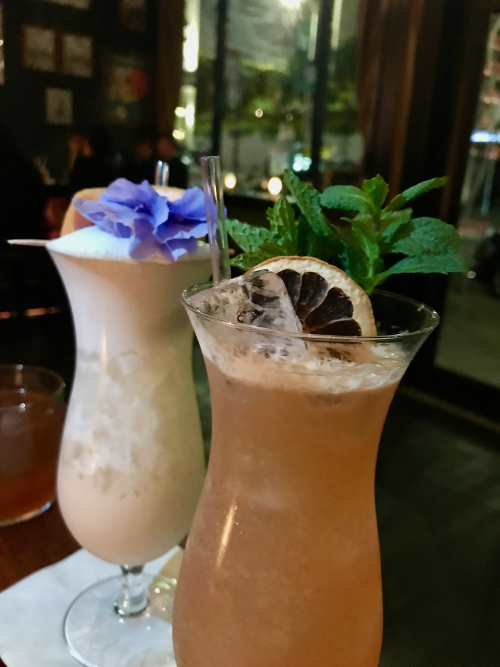 Oh, and we busted into that vintage 15 year aged Beam whiskey decanter from roughly the 1960s - good stuff!