Since 2009 I have been weighing liquor bottles before recycling them. I was up to 1226 bottles weighed and decided it was about time for me to analyze the data.

At the bottom of the post I'll include a link to my spreadsheets. Note that I dated when I weighed the bottles because bottles often change. In my final analysis I took only the more recent bottle weights if I had them, but it's likely that some of the data in my spreadsheet represents older bottles that have since been changed.

This data obviously doesn't include every bottle on the market, and there may be some mistakes in it, such as a typo when I was putting in weights or I didn't weigh the box/tube that a scotch whiskey came in, etc. So take it with a grain of salt.

Some things I learned:

I did weigh duplicates of the same bottle. The variance in bottle weights was about 10 grams. This is probably mostly due to me leaving a touch of liquid in the bottom of the bottle before weighing. Some varied by up to 15 grams but this was rare. So we can round our data to within 10 grams.

Here are some duplicates so you can see:

This is fairly obvious but nice to show. If you want to be better for the environment you should buy your booze in bulk. 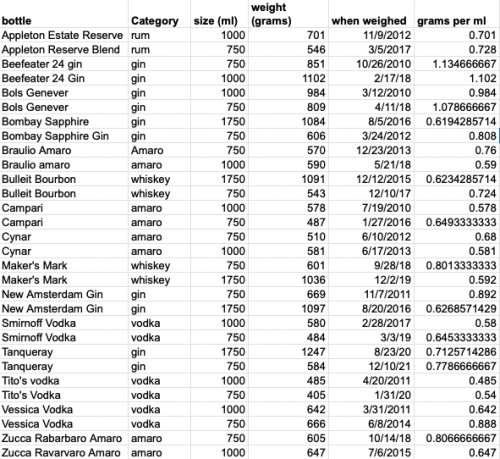 Brands change their bottles, and often not for the lighter. In recent years some brands have started moving to lighter bottles, but the common wisdom is that heavier bottles reflect a more premium (and expensive) product. That's the more typical direction.

A weighed a few of the more egregious bottle caps. The Padre Azul skull comes in at over 300 grams.

Somehow I only ever weighed St. Germain one time and not the bottle cap separately. The bottle is not as heavy as it feels though coming in at 800 grams.

I then reduced the data down to avoid repeats, and to only include 750ML bottles so I was comparing apples to apples (or rather, applejack to applejack).

My "final" clean data represents a total of 798 bottles.

There are repeats of bottles, for example a flavored vodka versus the unflavored, and different ages of some whiskies, but I kept those in on purpose. 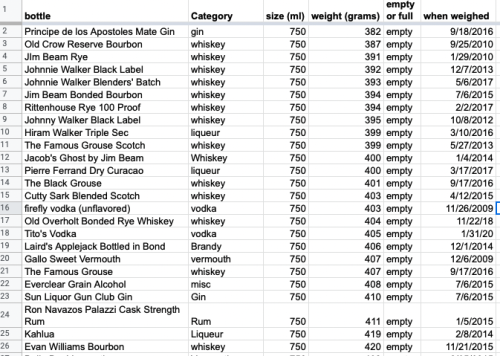 400 grams or lighter is about the lightest we seem to get with glass bottles. It's a lot of the American value bourbons and blended scotch whiskies as the lightest bottles.

Here are the next batch: 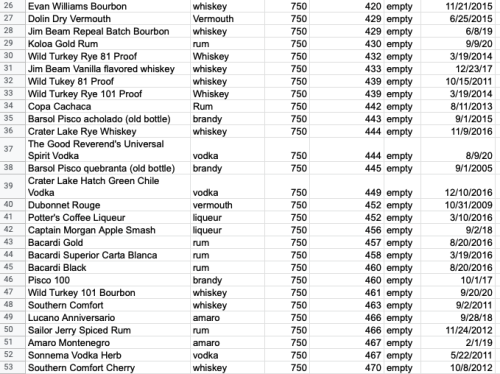 And now for the heaviest, ordered from heaviest down. In some cases like Double Cross Vodka that may include the box. I had intended to mark when I included boxes or not but didn't do a great job at it. 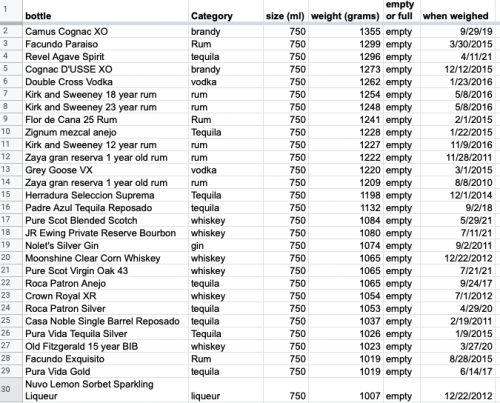 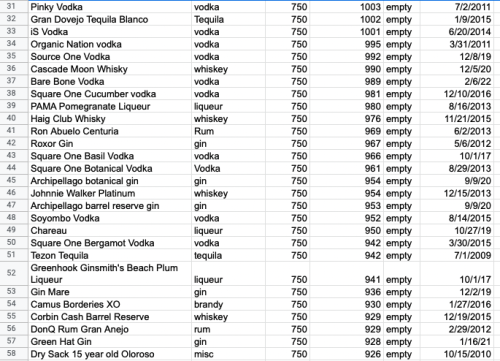 Now let's look at it by category!

Brandy: Note that Laird's has since moved to a new (assumedly heavier) bottle. 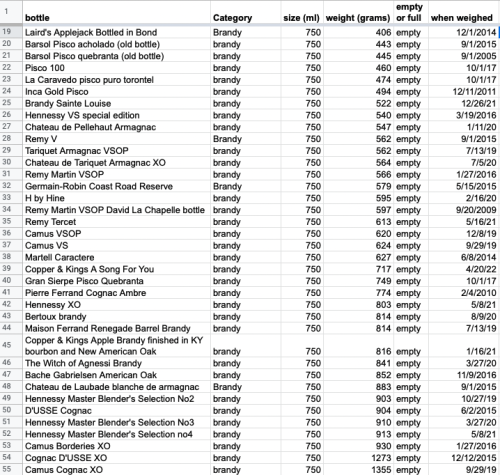 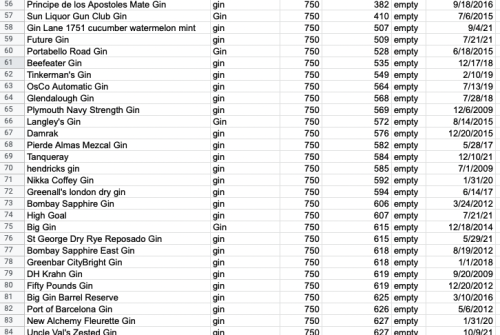 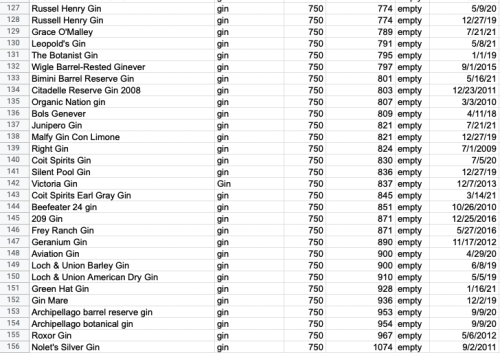 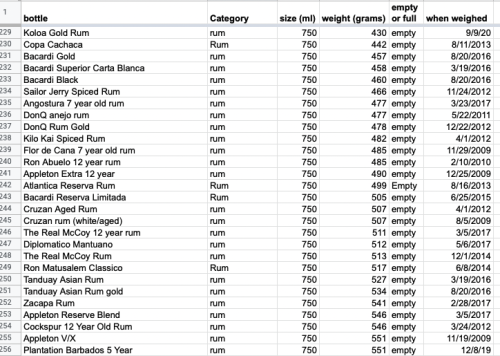 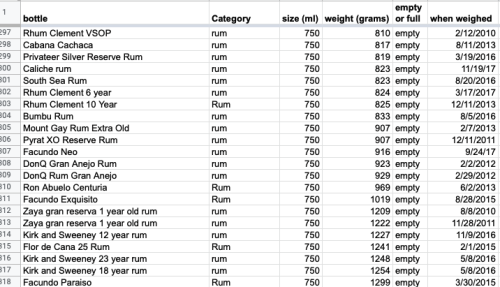 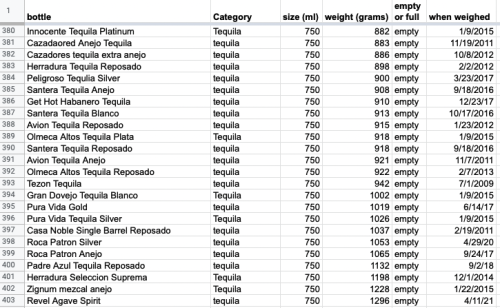 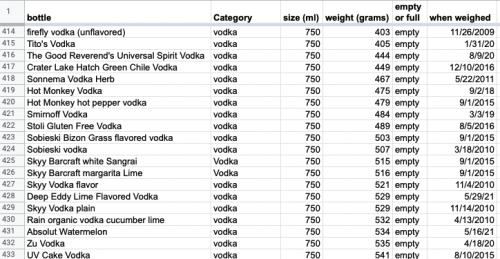 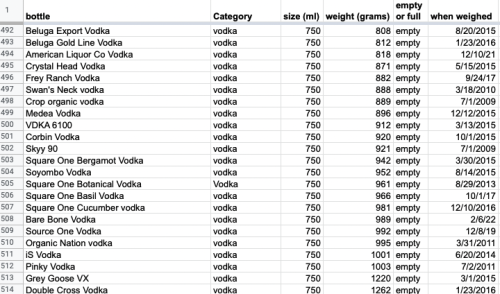 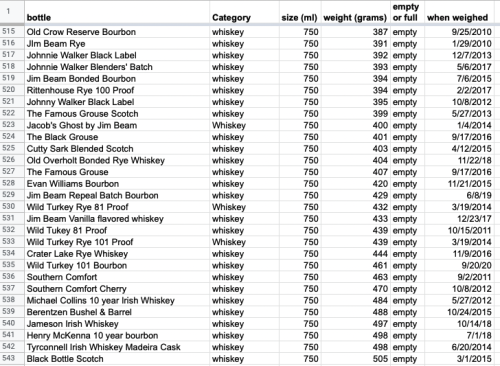 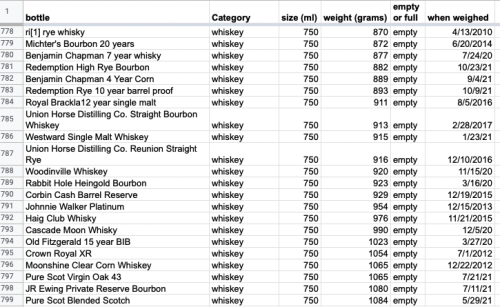 I hope you enjoyed this analysis. Do you want to look at the data and maybe even subcategorize it into things like bourbon vs scotch rather than just whisky?

You can find a copy of the sheet here. I have it set so that you should have to copy it in order to make your own changes. Let me know if you further analyze it!

There are certainly duplicates and other errors in my data, no need to point out anything minor.

Fascinating insights. Please keep adding to this or perhaps there is a way to crowd source from others?