Review of Doctors and Distillers in Publishers Weekly

My book Doctors and Distillers got a nice review in Publishers Weekly! 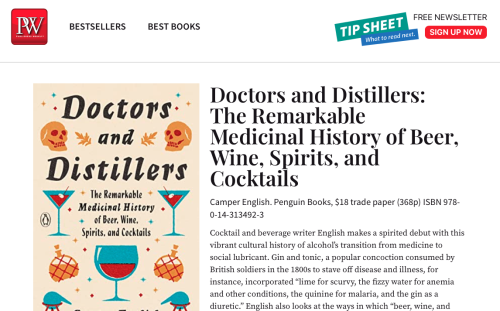 Cocktail and beverage writer English makes a spirited debut with this vibrant cultural history of alcohol’s transition from medicine to social lubricant. Gin and tonic, a popular concoction consumed by British soldiers in the 1800s to stave off disease and illness, for instance, incorporated “lime for scurvy, the fizzy water for anemia and other conditions, the quinine for malaria, and the gin as a diuretic.” English also looks at the ways in which “beer, wine, and fizzy spa water inspired great progress in medical science”: 12th-century physician Moses Maimonides prescribed wine for mad-dog bites, while the plague was combated with special beers. English knows his stuff, but he also knows how to have a good time. Cocktail recipes provided throughout are cheekily positioned: after a discussion of the maladies suffered by absinthe addicts, including “seizures, dementia, vertigo, hallucinations, violent outbursts... and epilepsy,” English offers up an absinthe and champagne drink called Death in the Afternoon. Distillations made by monks (including the Carthusians with their Chartreuse liqueur) and aperitifs and digestifs also get their historical due. For the curious imbiber, or simply those looking for a few choice trivia tidbits to drop at cocktail parties (sadly, Saint Bernards never wore little barrels of brandy around their necks to revive those lost in the Alps), this is a winner. (July)