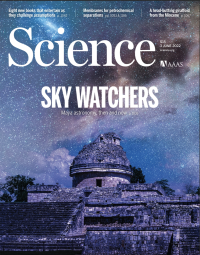 I'm so thrilled that Science wrote a review of Doctors and Distillers. Science is one of the most important academic journals in the world, and if you're a scientist it is a career goal to get into the publication. I didn't get in for doing any science, but for writing about the history of science. I'll take it!

It is still six weeks before the publication date of Doctors and Distillers (July 19, 2022) but it has already achieved my ultimate goal of critical success.

Doctors and Distillers, Camper English’s exploration of the medicinal history of libations, is jam-packed with factoids about the history of distilling and medicine and arranged in thematic and roughly chronological order. The writing is lively and accessible, easily enjoyed by a medical anthropologist, home mixologist, or seasoned bartender. Interstitials, meanwhile, provide relevant cocktail recipes that range from the quotidian to the obscure.

Progressing from fermentation and the early medicinal use of grain and grapes by the ancient Greeks and Romans, to the pursuit of alchemy (and eternal health) in the Middle Ages, and then on to the invention of various tonics in the 19th and 20th centuries, the book reveals the fascinating backstory of the spirits that sit on our bar shelves. All forms of alcohol, as well as the characters who brew them, get their 15 minutes of fame. Monks, we learn, for example, played key roles in the development of at least two beverages that are commercially popular today: Chartreuse and Dom Pérignon champagne. Delightful descriptions of ludicrous concoctions abound, such as Buckfast Tonic Wine, a caffeinated, fortified wine that, according to the author, has become the drink of choice for Scottish hooligans.

English discerningly points out when the medicinal value of alcohol-based remedies is likely to be low or nonexistent (the brandy allegedly toted by Alpine mastiffs to revive avalanche survivors, for instance). He describes how absinthe got its reputation
for inducing madness, delving into ill-fated public demonstrations on live guinea pigs,
and recounts how Rose’s Lime Juice originated as a treatment for scurvy.

Science—in the evidence-supported, peer-reviewed sense—waits in the wings for the first part of the book, making a grand entrance in chapter 4, where English introduces the early chemists and physicists who sought to understand carbonation and the connection between microorganisms and fermentation. Here, we peer into Louis Pasteur’s laboratory as the microbiologist delivers a death blow to the theory of spontaneous generation, in the process drawing attention to the strains of yeast responsible for fermenting alcohol safely.

Medicine and the scientific method remained loosely associated, at best, for millennia, English reminds readers. Moreover, what is considered “medicine” and what is a “cocktail” remain fluid, overlapping categories to this day. For reasons that range from well supported to actively misguided, alcohol consumption and health are tied together.

This book is best savored, not shotgunned, with a drink in hand and among company who will not mind frequent interruptions to hear passages read aloud. 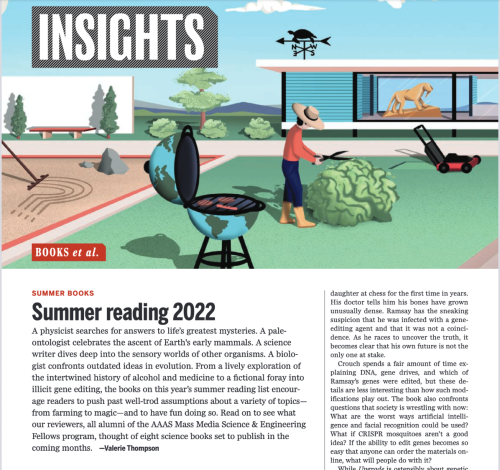 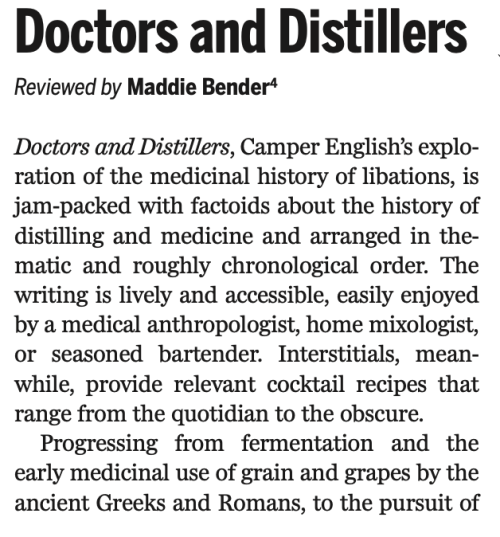 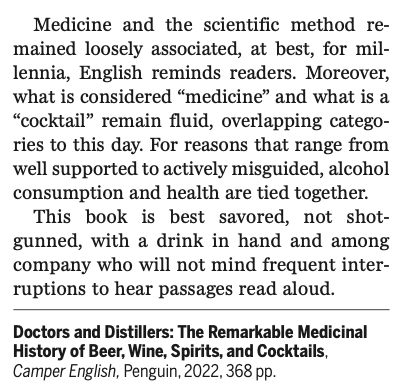