Did British Gin Come from Dutch Genever After All?

If you attended Tales of the Cocktail - virtually or in person - you have access to some recorded seminars. I watched and this post reports on one of those seminars:

From Usquebaugh to Aqua Fructum: The Early Modern English Origins of English Gin

By Jared Brown and Anistatia Miller of Mixellany and Sipsmith 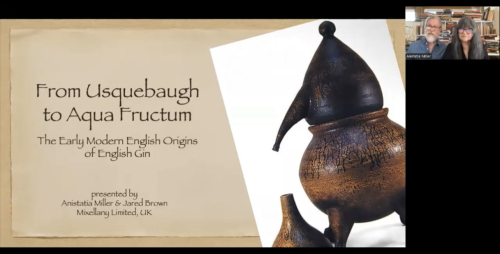 I am not sure if you can view them on a web browser or if you can only watch on your phone, which is a shame since the screen is tiny and the horizontal video was shown vertically and I couldn't seem to rotate it. But if you installed that Whova app, scroll down on the home screen for Tales of the Cocktail to the "videos" link and you'll find it.

The central argument of this talk is: Despite pretty much every history of gin stating that British gin came from Dutch genever and that the Brits put their own spin on it later, the British had a tradition of making gin (or juniper spirits anyway) that predates the reported influence from the Anglo-Dutch wars and William of Orange (from Holland)'s rule that began in 1689. Dutch genever was an independent style of gin from British juniper spirits.

I found this to be interesting, because in my seminar at this year's Tales of the Cocktail, I read and reported on many of the same books they used to reach their conclusions. I did note all the times juniper was used in recipes for distillates and how most did not look exactly like gin, but they make one important distinction between the styles of juniper spirits we'll get to in a second.

Throwing Doubts on the Accepted History of Genever -> Gin

My conclusions from this section:

My doubts, or things I'd like to see fleshed out more:

We've established that there were recipes for spirits that included juniper in England before Dutch influence, but there were also a lot of recipes for things that did not become popularly consumed beverages as gin did.

So we might propose that the British style of gin (or just juniper spirits) may have been present in England before Dutch influence, but is it possible that William of Orange's influence and familiarity with genever from his homeland helped made British gin a popular local style of genever?  Was it the influence of the Dutch that drove the popularity of juniper spirits?

Basically did British gin really evolve independently, or was it an interpretation of Dutch gin? I think Brown and Miller are stating that "existing juniper spirits evolved into British gin independently of Dutch influence."

I conclude from the same evidence so far "spirits with juniper and a neutral base existed in Britain before the Dutch may have had influence on England's drinking culture," but not that the popularity of gin is independent of Dutch influence.

Fascinating stuff to think about!