Aqua Vitae Opinions from a 1540 Book on Metallurgy

I read about a reference to distillation in the Pirotechnia, so I decided to look up the book.
According to Wikipedia, "De la Pirotechnia is considered to be one of the first printed books on metallurgy to have been published in Europe. It was written in Italian and first published in Venice in 1540. The author was Vannoccio Biringuccio, a citizen of Siena, Italy, who died before it was published."
I typed in the one page on which it seems to be mentioned:

To conclude at last these methods of distilling and extracting waters are varied according to the wishes that come to the minds of the workers.  But in my opinion the true way is to adapt the fires well, with which you can do whatever pleases you when you wish, without the necessity of so much coöperating equipment. For this reason it would perhaps be necessary that I tell you here of the shapes and kinds of the furnaces, but I have decided to tell you of them farther on and here, in order not to break the discourse on distillation, I will tell you in detail the methods that are used for making aqua vitae.
Many call this water of life in order to exalt it it, but they also say that for him who does not know how to make it, it should be called water of death. This is that substance and that agent which the alchemists bring to such subtlety that they call it the Quintessence and they credit it with so many virtues and powers [128] that the heavens could scarcely perform more. It is indeed true that he who considers it well will see great and laudable effects. In addition to some experiences, I remember having seen a treatise on this in which an experimenter had noted more than two hundred experimental effects. But if it is true, as the alchemists say, that this power alone makes metals grow and revives half-dead bodies, all the other things that they say of it must also be believed. It is certainly evident that it is one of the things that are very preservative against  putrefaction and is beneficial to many cold and moist sicknesses. The quality of this is subtle, fiery, and penetrating and these subtle, fiery, and penetrating and these subtle investigators believe that it extracts the virtues from everything that is put into it and converts them into its own subtle and penetrating nature. In short, they say so many things about it that it would be too long a subject if I should now wish to related it to you.

This confirms a few things and I think adds some depth to some of the material from Doctors and Distillers. 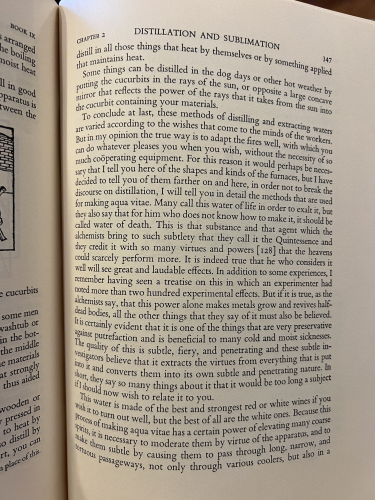