Over at AlcoholProfessor.com, I reviewed the new book Brand Mysticism: Cultivate Creativity and Intoxicate Your Audience by Steven Grasse and Aaron Goldfarb. [buy on Amazon] [buy on Bookshop]

I have pasted the text below. The story originally appeared on AlcoholProfessor.com. 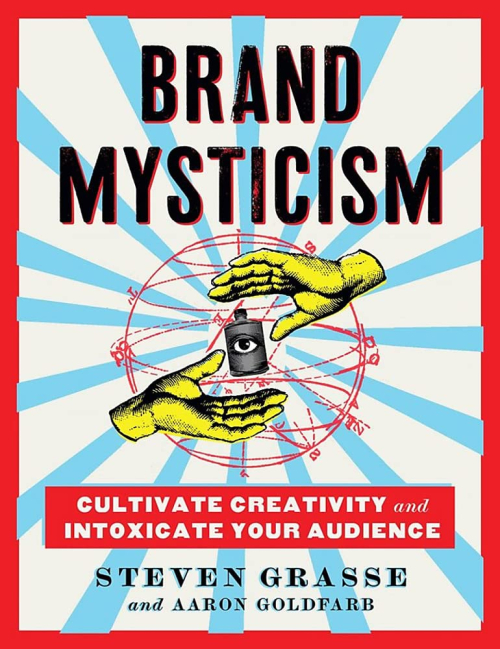 Years ago, advertising executive Steven Grasse was given the assignment by William Grant & Sons, owner of Glenfiddich, to create a gin brand. This was in the era before the classic cocktail revival when was gin was decidedly not in fashion. Grasse learned about how gin was made and suggested cucumber as a botanical, he writes in Brand Mysticism. Master Distiller Lesley Gracie came up with the idea to add rose to it and developed the liquid.

The Brand Part Of The Brand

The “brand” part of what would become Hendrick’s Gin was inspired by Grasse thinking that the stills used to create the liquid looked like something out of the Victorian era or a Jules Verne book, and then building a deep world of content and imagery around it to transport interested people out of the present and into a detailed fantasy realm. If you picture promotional materials for Hendrick’s, you might conjure up images of gentlemen in top hats and monocles, sea creatures, flying machines, vaguely occult-like eyeballs, and garden tea parties – those images and more make up the rich fictional environment of the “unusual” gin.

World-building around a transportive brand concept is a key strategy explained in Brand Mysticism and probably the one Grasse spends the most time on. In the first section of the book that details his life and career path long before he is tasked with creating a gin, Grasse reveals how he developed a sense of curiosity and continues to find insight in books and podcasts on odd parts of history. Reading and listening to these sources (as opposed to streaming the same television series that everyone else is watching) provides inspiration and material for brand building. The book’s subtitle, Cultivate Creativity and Intoxicate Your Audience, refers to this trick and to providing layers of content for curious fans to explore, something missing in soulless “Potemkin brands” that offer nothing more than what’s visible at the surface.

After Hendrick’s, Grasse developed the concept for the spiced rum Sailor Jerry that he calls a “punk rock Captain Morgan,” with imagery based on the work of tattoo artist Normal Keith Collins. He uses this example to illustrate how bucking trends – creating ugly (or rather, not currently trendy) instead of in-the-moment hip packaging- can result in a more timeless product rather than a flash in the pan brand, even if it won’t win any design awards.

The book includes many short sections of a few pages each that include among other topics Grasse’s daily schedule, why he doesn’t hire people with fancy degrees, why the company is headquartered in Philadelphia, a rant against sourced whiskey brands, and future plans for Tamworth Distilling.

It seems there are two main audiences who would be most interested in this book. The first is those curious as to the backstories behind several popular alcohol brands. Brand Mysticism is a look at how several successful spirits brands were made- and also at a few cases where mistakes were made that lead to brand collapse. In addition to Hendrick’s and Sailor Jerry, we learn of later projects including Grasse’s own brands Art in the Age and Tamworth Distilling (we previously wrote about their creepy spirits), plus brands he helped rejuvenate including Miller (and putting “The Champagne of Beers” into champagne bottles) and Narragansett Beer (appealing heavily to a local audience). We see that often the brand story is developed before anyone ever fires up a still (though having a “good and differentiated liquid” is emphasized), and how refreshing a brand often means returning to its origin story or former core values.

The second audience for the book might be people who create or market brands, be they alcoholic liquids or other products, and who want to learn from a master. Here the book may be more inspirational than prescriptive. Some of the techniques/tricks Grasse regularly employs include “creative grenades” that are big attention-getting stunts like selling a penny-farthing stationary exercise bike and manufacturing an organ with cucumbers for keys, both executed for Hendrick’s. Situations to be avoided include having anything less than complete control over the brands’ marketing and promotion. Neither the expensive stunts nor total controls are going to be possible for most readers, even if they do work in the industry.

For the most part Brand Mysticism is not structured as advice with examples outside the liquor industry that can extend to other products, but specifically what worked (and sometimes what didn’t work) for the author. The homework then will be to find ways to apply what worked for Grasse to one’s own situation- and it seems to me there is enough inspiration in the book to make that a worthwhile endeavor.

Though I am squarely in the “interested in brand backstories” set of readers, one of the first things I did after finishing this book was to borrow several others from the library.  We’ll see what they inspire.